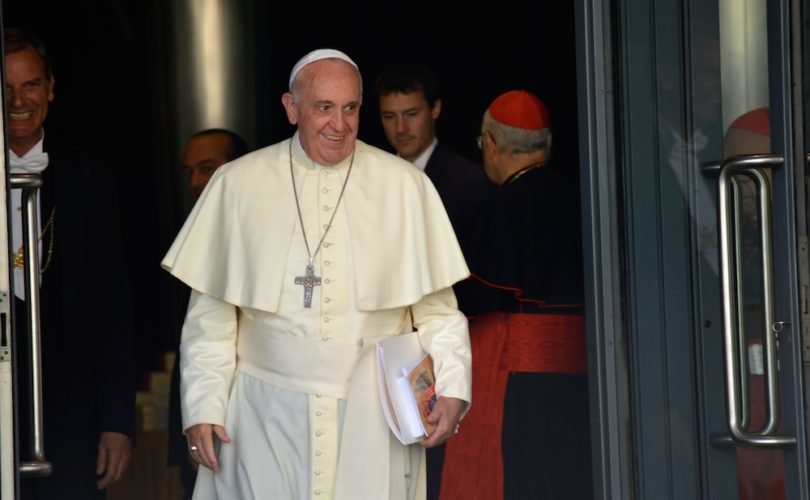 Pope Francis leaves the hall where the Synod on the Family is being held at the Vatican.John-Henry Westen / LifeSiteNews.com

While Pope Francis has been silent about many of the controversial matters being debated at the Synod, both in the lead-up to the Synod and in the Synod Hall, veteran Vatican watchers say he has been obliquely making his views known through other avenues, including through some of his close advisors, as well his homilies at his private morning masses.

When it comes to advisors, none have sparked more speculation than Cardinal Walter Kasper, with debate swirling for months about whether Pope Francis himself personally supports Cardinal Kasper’s controversial proposal to allow divorced and remarried Catholics to receive communion in some circumstances.

While the cardinal himself has repeatedly claimed the pope’s support, and Francis has repeatedly praised the cardinal on a personal level and his writing in general, no explicit confirmation of the pope’s position on the specific issue has been forthcoming. But in an explosive interview yesterday Kasper was arguably more explicit than ever before, bluntly telling Edward Pentin of Zenit that the pontiff “wants” the change. “Of course, the pope wants it and the world needs it,” he said.

If so, it is hard to interpret a homily from Pope Francis on the morning of October 13, 2014, the day the controversial “mid-term” report was released, creating a firestorm inside and outside the Synod, as anything other than the pope strongly hinting at his views on this, and possibly other controversies at the ongoing Synod.

Indeed, even consummate Vatican journalist John Allen of the Boston Globe agreed, writing: “In his usual impromptu homily at morning Mass (Monday), Pope Francis seemed to prepare the ground for the (interim report), and the conflicting reactions it was destined to stir, by delivering a strong rebuke to rigid legalists of all stripes.”

During the homily, Pope Francis spoke of the “Doctors of the Law” who were “unable to understand the signs of the times.” They were, he said, “closed within their system, they had perfectly systemized the law, it was a masterpiece.

The pope noted that the Doctors of the Law “did not like” Jesus, he “was dangerous; doctrine was in danger, the doctrine of the law” which the theologians had formulated over the centuries. Pope Francis said that while the theologians had  “done this out of love, to be faithful to God,” they had become “closed”, they had “simply forgotten history. They had forgotten that God is the God of the Law, but He is also the God of surprises.”

Seeming to address one of the major sub themes of the Synod, that doctrine will never change, but pastoral practice should, Pope Francis said: “They did not understand that God is the God of surprises, that God is always new; He never denies himself, never says that what He said was wrong, never, but He always surprises us. They did not understand this and they closed themselves within that system that was created with the best of intentions.”

But while the pope seemed to frame the controversies of the Synod as a dispute between legalists and those who are open to God’s “surprises,” leading Synod Fathers who are concerned about attempts to change long-standing Church practice and teaching, have been arguing that the controversy is ultimately about whether or not the Church will conform “to the mentality of today’s world.”

Numerous Vatican Synod Fathers have voiced grave concerns both within and without the Synod hall over the last few days that the Synod mid-term report has indeed endangered assurance of doctrinal security, and with potentially grave consequences.

Most recently, Australian Cardinal George Pell said: “In seeking to be merciful, some want to open up Catholic teaching on marriage, divorce, civil unions, homosexuality in a radically liberalising direction, whose fruits we see in other Christian traditions.” He urged, “the task now is to reassure good practising Catholics that doctrinal changes are not possible; to urge people to take a deep breath, pause and to work to prevent deeper divisions and radicalising of factions.”

His remarks echo the even more blunt words of Cardinal Raymond Burke, who himself directly addressed Pope Francis in his criticisms of the Synod’s mid-term report, saying that a statement from the pope strongly re-affirming Church teaching is “long overdue.”

“The faithful and their good shepherds are looking to the Vicar of Christ for the confirmation of the Catholic faith and practice regarding marriage which is the first cell of the life of the Church,” he added.

The mid-term report, he said, proposes views that many Synod fathers “cannot accept,” and that they “as faithful shepherds of the flock cannot accept.”

The push to radically alter so-called “pastoral practice” without simultaneously affecting doctrine is not possible.  One African bishop who was appraised of the situation at the Synod reportedly wept at the proposals on the table. “Oh my God, what are they doing? The people will soon get hold of declarations like these and they'll prefer to become evangelicals or even Muslims than remain Catholic! What are they doing in Rome? Oh my God, oh my God!,” he declared.

It’s not the first time the pope has seemed to address tensions of the Synod in his morning homilies. Before the official launch of the Synod, while various polarized positions were being laid out in the media via book releases and such, Pope Francis sounded a remarkably similar tone to Monday’s homily.

“It’s the ruling class which closes the door to God’s way of salvation,” Pope Francis said, referring to Church leaders, in the homily at his private Mass on October 4. “This attitude is quite different from that of the people of God, who understand and accept salvation brought to them through Jesus,” he added. “Their leaders, on the other hand, reduce salvation to the fulfilment of the 613 commandments they have created through their intellectual and theological fervour.”

“These leaders,” the pope said, “don’t believe in mercy and forgiveness but simply in sacrifices.” He urged asking ourselves: “How do I want to be saved? On my own? Through a spirituality which is good, but fixed and clear so that there are no risks? Or following the footsteps of Jesus who always surprises us, opening doors to that mystery of God’s mercy and pardon?”

That homily too was interpreted by veteran Vatican watchers as Pope Francis staking out a position on the matters of the Synod. “The Pope has hinted in homilies, addresses and interviews,” said the Telegraph’s Vatican correspondent Nick Squires, “that he is in favour of adopting a more ‘merciful’ approach towards remarried divorcees who want to receive the Sacrament.”

Kasper: Synod should ignore African bishops; ‘majority’ favor communion for divorced/remarried
This archbishop and Synod father was almost aborted…by his own aunt (Interview)