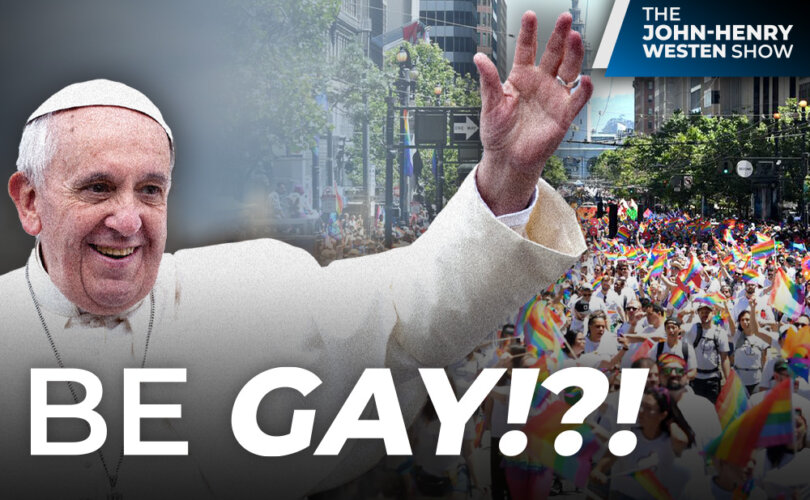 (LifeSiteNews) — In a new interview conducted with the Associated Press, Pope Francis has criticized bishops who seek to maintain laws against sodomy in countries of Africa. “These bishops have to have a process of conversion,” Francis declared, calling for “tenderness, please, as God has for each one of us.”

Going further, the 86-year-old former Archbishop of Buenos Aires called any laws which criminalize sodomy “unjust,” adding that the Catholic Church must be involved in ending such laws. “It must do this. It must do this,” he stated.

It is clear from his remarks Francis was referring to acts of sodomy rather than the inclination towards such acts. The Church has always taught that while homosexual sexual acts are gravely sinful, the inclination of same-sex attraction is not sinful. It is an objectively disordered inclination of course, but not sinful unless acted upon.

Yet Francis seems confused about this reality as he said to AP: “Being homosexual is not a crime. It’s not a crime. Yes, but it’s a sin. Fine, but first let’s distinguish between a sin and a crime.”

Being homosexual – in the sense that you experience same-sex attraction is not a sin! Acting on that inclination, by engaging in homosexual sexual relations, is a sin, and in some countries it is indeed a crime.

Expanding on his comments on LGBT-identifying individuals, Francis declared that “we are all children of God, and God loves us as we are and for the strength that each of us fights for our dignity.”

And that is of course very true. God loves us all with all of our various inclinations to sin, sexual and otherwise. God loves the young man who is inclined to sex outside of marriage with his girlfriend. When he acts on that inclination it is a sin condemned by God and harming the young man and his girlfriend. Harming them both physically, psychologically but worst of all, spiritually killing them.

God loves the man who is abnormally inclined to sexual relations with animals. Even though it is a disordered inclination, there is no sin in having that temptation. However, when acted upon, it is a grievous sin. In addition to the harm that it causes the animal, it harms him physically, psychologically and spiritually. In some countries it is also a crime which can carry criminal penalties.

Laws against sexual perversion in various nations are there for the protection of the population. Some states outlaw adultery because they see the grave harm caused to society by broken families and the massive cost to the state by the poverty, abuse and neglect which flow in the wake of broken families. It is similar in the case of sex before marriage where some states recognize that without support, a woman can be left by a man with a child out of wedlock, with venereal diseases and worse.

Most of these laws are also encompass rape and pedophilia. Even in America in some states there remain laws which forbid sexual relations between adults and minors.

It is these laws which some bishops support in certain African countries. These laws do threaten criminal sanctions for harmful sexual acts – not for inclinations or temptations. Such laws do forbid teaching children in classrooms in ways which encourages sodomy, and LGBT ideology.

In a statement provided to LifeSite, a theologian commented that “while not all sins should be made into crimes, Christian nations have generally treated homosexual activity as something harmful to society, which therefore needed to be declared illegal.”

“Recent experience shows the wisdom of this, since the repeal of laws against such activity has led everywhere to a general confusion and decline of sexual morality, and even to the scarcely credible situation of people being uncertain about the nature of men and women,” the theologian added.

While Francis stated that bishops who support anti-sodomy laws need conversion, in truth it is Francis who needs a conversion and on this day, the feast of the conversion of St. Paul, will you please join me in praying for the conversion of Pope Francis? It certainly seems  that every day, Francis is much more a persecutor of Catholics than was Saul prior to his being knocked off his horse.