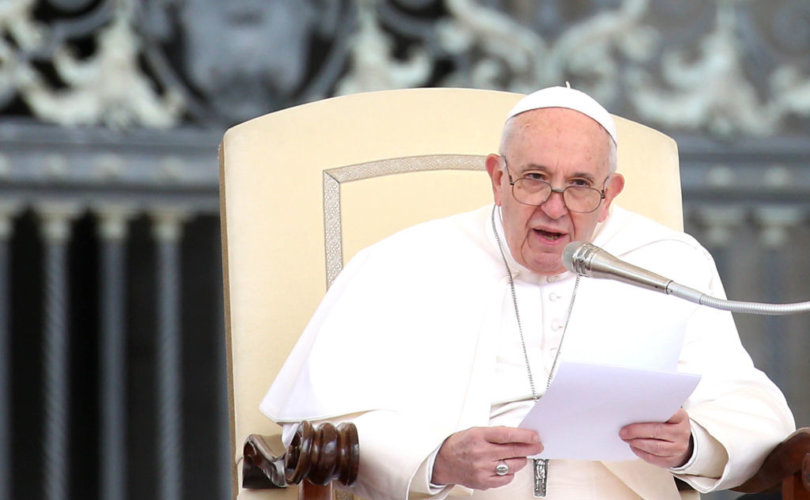 March 29, 2019 (LifeSiteNews) – Pope Francis will meet on April 5 with several LGBT advocates about the matter of the decriminalization of homosexuality where he will then give a “historic speech … relevant to the subject matter,” according to several sources who have a leaked letter about the event to back up their claim.

French sociologist and book author Dr. Frédéric Martel, who is an open homosexual, reported about the event on his website, referencing a letter of invitation to the event that was addressed to an LGBT activist. LifeSiteNews obtained a copy of the letter.

The letter – dated March 4 and signed by Professor Raúl Zaffaroni and Dr. Leonardo Raznovich – is an invitation in the name of a Coordinating Committee of a research project regarding “criminalisation of sexual relations between persons of same sex in the Caribbean.”

It asks the individual addressee (a pro-LGBT activist at the U.N.) to join a “private audience with His Holiness Pope Francis to be held on 5 April 2019 at the Vatican City at 12.00 noon.”

During that audience, the letter states, “the Chair of the Coordinating Committee, Professor Raúl Zaffaroni, Justice of the Inter American Court of Human Rights, will present to His Holiness the Pope the preliminary results of the research.”

Then the letter says that “Professor Zaffaroni's words will be followed by a historical speech by His Holiness relevant to the subject matter.”

Martel – a defender of the LGBT agenda – has several sources who confirmed to him the upcoming meeting.

This Committee of a research project regarding the criminalization of sexual relations between persons of same sex in the Caribbean region is a project of the Inter-American Institute of Human Rights, the International Bar Association – a bar association of international legal practitioners, as well as of ILANDU, the United Nations' Latin American Institute for the Prevention of Crime and the Treatment of Offenders. All three organizations appear on the letterhead of the leaked letter.

One of the two signatories of the letter, Dr. Raznovich has more information on this project – and its aim of decriminalizing homosexual relationships – in his own personal biography as posted on the website of the Canterbury Christ Church University:

In January 2016, Dr. Raznovich was appointed as Education Officer of the Lesbian, Gay, Bisexual, Transgender and Intersex Law Committee of the International Bar Association for the biennium 2016-2017. He is currently an Honorary Visiting Senior Research Fellow of Canterbury Christ Church University in the UK and, in such capacity, is undertaking a research project in the Caribbean, the objective of which is to force the remaining ten countries in the Caribbean Region to decriminalise sodomy.

Raznovich's strategy is to perform a comprehensive critical analysis of the on-going criminalisation of homosexuality in the 10 jurisdictions in the Caribbean and to assess the social impact of these mechanisms on the health of LGTBI persons and society at large. The Inter American Institute of Human Rights is the main host of the research in the region. The cost of conducting the fieldwork, analysing the data and preparing the report is to be met by funds that Dr. Raznovich secured from the International Bar Association and the ILANUD. The project has formally started in May 2017 and its completion it is envisage for April 2019.”

According to Dr. Martel, Michael Kirby, a former Australian Supreme Court Justice who is living in a civil union with another man, will also be present among the several high-ranking participants of that papal audience. However, another invitee, Edwin Cameron, who is “close to Mandela and a member of the South African High Court, has declined to accept the invitation,” because he fears there will be a lack of concrete steps coming out of this audience.

Zaffaroni is a former judge of Argentina's Supreme Court and a retired law professor at the University of Buenos Aires, and he thus knows Pope Francis from his time in Argentina. Martel calls Zaffaroni “a friend of Pope Francis.” Zaffaroni is a long-standing supporter of the decriminalization of homosexual relationships and he also opposes the criminalization of abortion. Pope Francis, when still the archbishop of Buenos Aires, once invited Zaffaroni, in 2010, to participate as a speaker at a diocesan event on children and youth, something that caused indignation among Catholics at the time.

According to Martel, the April 5 meeting will provide the “pretext” for Pope Francis to speak on the question of the decriminalization of homosexuality. Several sources have told Martel that while Pope Francis cannot “express public support for civil [same-sex] unions” he might, nevertheless, speak up “in favor of a decriminalization of homosexuality.”

This information as given here, says Martel, has been “confirmed to me by several LBGT world leaders who also have been invited to this reunion in a letter (of which I have a copy), from different countries of Africa, North America, and South America.”

However, several sources in Rome have told the French author that they “remain skeptical about a possible evolution of Francis in this matter [of homosexuality].” One source, a Jesuit from Rome, cautioned Martel that this meeting on April 5 is “not officially a conference of the Vatican” and that “there are serious doubts that the Pope will make a major announcement on that occasion.”

Dr. Martel adds that Pope Francis will already make some comments on the matter of homosexuality in a new Spanish interview that will be aired this coming Sunday.

Thus, it will be seen whether or not Pope Francis will deliver a “historic speech.”

Pope Francis recently met with a pro-homosexual Catholic group, posing with them for photos. The group, “LGBT+ Catholics Westminster”, as been appointed by Cardinal Vincent Nichols, Archbishop of Westminster, to provide pastoral care for homosexuals and to promote the normalization of homosexuality within the Catholic Church and seeks to “rid Church and society of systemic, institutional homophobia.”

A Reuters report of December 2008 confirms that Vatican's stand at the time, saying that “Gay rights groups and newspaper editorials on Tuesday condemned the Vatican for its decision to oppose a proposed U.N. resolution calling on governments worldwide to de-criminalize homosexuality.” The Catholic Church was, together with the U.S., among those countries rejecting this non-binding declaration seeking to decriminalize homosexuality at the U.N.

According to Martel, the Vatican diplomats “fought against the expressions 'sexual orientation' and 'gender identity', which, according to their own view, have no juridical standing in international law. Moreover, to recognize these expressions could lead to a legitimization of polygamy or of sexual abuse, according to those diplomatic cables that Dr. Martel has been able to read.

Furthermore, the French author names three nuncios who are dominant among those who fought this battle against the decriminalization of homosexuality at the U.N.: Archbishop Silvano Tomasi in Geneva, Cardinal Renato Martino and then Archbishop Celestino Migliore before the United Nations in New York. “Pope Benedict XVI, his Secretary of State Cardinal [Tarcisio] Bertone, and then the future Cardinal [Dominique] Mamberti, have been very active concerning this topic.”

“To the general surprise,” said Martel, when it came to the final vote, “the Vatican voted 'no' to the U.N. Declaration on the decriminalization of homosexuality.” Even though it could have abstained from voting (with China or Turkey),” the author added, “the Vatican supported a violently homophobic  counter-declaration carried out by Syria, Iran, and even Saudi Arabia.”

In conclusion – and in light of the Vatican's history of dealing with this topic – Dr. Martel said that “Should Pope Francis defend the decriminalization of homosexuality in the Vatican on April 5, it would mark thus a change of a major line of policy concerning the gay question, profoundly breaking with the pontificates of Paul VI, John Paul II, and Benedic XVI.”

Dr. Martel has just recently published his book, In the Closet of the Vatican, in which he claims that there is a vast presence of homosexual men among the Catholic priesthood, especially in the Vatican. In one chapter, he presented, as true, the moral corruption that is taking place in the Diocese of Havana, Cuba; and likewise in another chapter, he describes a plan of Pope Francis and his collaborators slowly to change the Church's moral teaching. He also essentially confirmed the report of Archbishop Carlo Maria Viganò that Pope Francis knew of then-Cardinal McCarrick's own homosexual relationships.

While he clearly has a bias against the more conservative prelates who try to defend the Church's traditional moral teaching – which can be seen in his recurrent innuendoes against them – Dr. Martel nonetheless provides much information since, through his own pro-LGBT stance, he has received many candid reports and open doors in the Vatican over the course of the past four years.