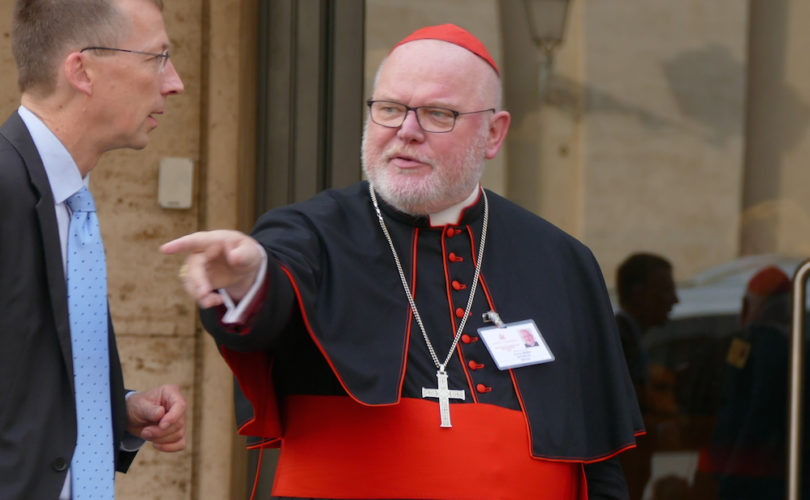 June 10, 2021 (LifeSiteNews) – Pope Francis published today a letter addressed to Cardinal Reinhard Marx, archbishop of the Archdiocese of Munich and Freising, telling him that he does not accept Marx’s recent offer to resign. The Pope’s letter asks Marx to remain in his position. This move makes many observers wonder why Marx's offer to resign was publicized in the first place.

The Pope speaks to Marx about “confirming your mission and not accepting your resignation” and thanks him for his “Christian courage which is not afraid of the cross and which does not shy away from humbling itself in the face of the reality of sin.” In this, Pope Francis sees a “grace that the Lord has given you and I see that you wish to accept it and to preserve it in order to make it fruitful.”

Furthermore, the Pope speaks of the crisis in the Church in Germany which exists because of the “abuse.” He adds that one has to “accept” the crisis in order to make it fruitful.

In a surprising comment, Pope Francis explains that “the ‘mea culpa’ in the face of so many mistakes in the past has been pronounced by us more than once, in many situations, even if we personally were not involved in this historic phase.”

This seems to be surprising given the fact that both Pope Francis and Cardinal Marx have been accused of misconduct with regard to sex abuse cases. And both have already admitted in public of having committed mistakes in this regard.

In any event, Pope Francis stresses in his letter to the German cardinal that now, in light of the abuse crisis, it is time for “reform.” Here, we take especially note of his words “wherever that will lead us”:

And it is precisely this behavior that is being asked of us today. We are asked to reform, which – in this case – does not consist in words, but in behaviors that have the courage to face this crisis, to accept the reality, wherever that will lead us.

Cardinal Marx, only a few days ago, offered Pope Francis his resignation. On June 4, he published a letter (also in English) that he had written on May 21 to Pope Francis and which he had already discussed with the Pope in person.

Speaking about the crisis in the Church due to the many cases of clerical sex abuse and its cover-up, Marx admits his own guilt, saying that “this crisis has also been caused by our own failure, by our own guilt.” This prelate thus wants to “share the responsibility for the catastrophe of the sexual abuse by Church officials over the past decades.” And he thinks that the Church is “at a dead end,” but hopes that this will become a “turning point.” For Cardinal Marx, of course, the solution for this crisis is the much-debated and controversial German “Synodal Path” that so far has been questioning priestly celibacy, the hierarchical structure of the Church, the all-male priesthood, and the ban on blessings for homosexual couples.

That Cardinal Marx did not intend with this letter to go into real retirement becomes clear at its end, where he stresses that he “continues” to “enjoy being a priest and a bishop of this Church.”

“In the next years of my service,” he adds, “I would like to increasingly dedicate myself to pastoral care and support an ecclesiastical renewal of the Church which you also call for incessantly.”

Since Cardinal Marx had previously spoken with Pope Francis about this letter, and since Pope Francis gave him his approval for publishing this private letter, it is clear that we are dealing with a well-planned event that has its purposes.

So what are the purposes of this public stunt?

First of all, Cardinal Marx presents himself in a “humility maneuver,” as the German journalist Lucas Wiegelmann of Die Welt called it. He wonders whether this offer of resignation was a way for Cardinal Marx to avoid having to face many questions concerning his own behavior in the abuse crisis. Cardinal Marx has already publicly admitted to having mishandled an abuse case as bishop of the Diocese of Trier. New studies that are being undertaken now might unearth more unresolved cases of mishandling. And in fact, by the Pope's decision to keep Cardinal Marx in Munich, he seems to be giving him a free pass on his own involvement in the sex abuse crisis.

Another aspect of this entire maneuver could also be that the Pope and Marx wished to exert some influence on Cardinal Reinhard Woelki, an opponent of the radical proposals of the Synodal Path, to take a similar step of resignation in light of the sex abuse crisis that has been rocking his own Archdiocese of Cologne for quite some time now.

There were also other sources who thought that Pope Francis means to prepare Marx for a post in Rome, either as the head of the Congregation for the Clergy or for some position in the government of the Vatican. After all, Marx already holds important positions in Rome, being a member of the Pope's personal Council of Cardinals – counseling the pope with regard to his curial reform – and as  secretary of the Vatican's Secretariat for the Economy.

But perhaps this entire public event was merely aimed at indirectly supporting the German Synodal Path. After all, both actors – the Pope and Marx – support “reform” in the Church, and more specifically the “synodal” way of steering the Church into revolutionary changes. It was Pope Francis who had pushed the Italian bishops' conference into recently opening up their own synodal path, and he also announced a three-year-long synodal path on synodality for the whole Church, which is to begin next year.

Could it be that the Pope is giving here Marx his stamp of approval for his radical reform? Rudolf Gehrig, a German journalist working for CNA Deutsch and EWTN Deutsch, writes today on Twitter: “‘This again encourages us to continue the ‘Synodal Path’ in this form.’  – this reaction will surely come soon. Wait and see. #Marx”

Only a few hours later, the same journalist quotes Thomas Sternberg, the lay head of the German Synodal Path, with the words: “this shows me that it is wrong to assume in the Vatican a closed bloc of rejecters of the 'Synodal Path' and the need for reform. (…) But the Pope's letter to #Marx shows the opposite.”

An interesting angle to this story is also a new intervention by Cardinal Walter Kasper, a close confidant of the Pope, certainly in matters of Germany. He shows himself now “very worried” about the Synodal Path and hopes that it will enter “Catholic” paths. He argues against a general intercommunion for all, sees still some “open questions,” but then admits that he himself has “never” refused a Protestant at the Communion rail. He reports that he has seen many “annoyed” reactions from Catholics in other countries who are weary of being told by Germans what to do. He proposes to rediscover the “radicality of the Gospels.”

It will have to be seen whether this Kasper intervention is part of this public maneuver, whether his role is to assure people in the world that the German path is too radical and that Rome will not let them get away with it. His role then could be to appease concerned Catholics in the world, while the Pope keeps pursuing his radical path of reform either by way of the Italian bishops or by way of his planned three-year-long synodal process.

Might it be that at the end of this process, the Church will stand deserted, similar to St. Peter's Basilica in Rome, where individual Masses are rarely to be found anymore? Pope Francis cancelled them during Lent, with reference to Lent, but afterwards they were never resumed with the normal schedule. St. Peter's, too, has been emptied of Our Lord's presence.

One source in the Vatican suggested that this maneuver was more a political maneuver aimed at increasing the public image of the two men involved. But power politics, too, finally leads to the emptying of the Church. One has to pray for deliverance of this evil.