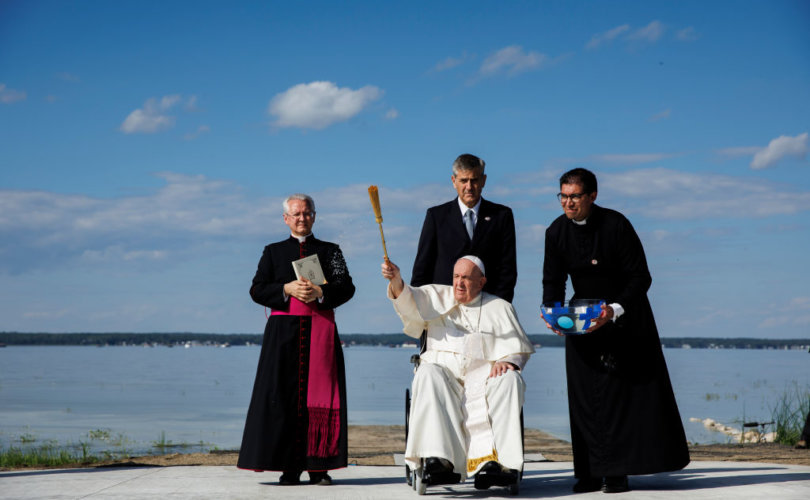 (LifeSiteNews) – The Pope’s visit to Canada has thus far been a bit of a train wreck, which was sadly to be expected.

He has observed or participated in pagan rituals, and has fueled the fire of the leftist narrative that Christians were mean and evil colonizers who ruined the perfect noble paradise that existed before the French Jesuits shed their blood to save the souls of the Natives.

It has been hard to watch, and I must admit… I was dreading the visit long before he arrived.

Before I continue, I am a Roman Catholic and I love the pope, I mean that. I pray for him multiple times a day with my wife and children, and I take comfort in being a member of the Roman Catholic Church.

That being said, I sort of wish he didn’t come, and most Canadian’s don’t care that he is here.

Baffled by low turn out

Father Raymond De Souza was asked during the EWTN coverage of the Pope’s Mass in Quebec why so few people had turned out to the various papal events.

Father De Souza seemed to struggle to give a straight forward answer and sort of beat around the bush.

He suggested that maybe the event wasn’t advertised enough, or maybe there wasn’t enough notice. Or, he suggested, perhaps it was not a good idea to present the event as an Indigenous-only event, rather than something for all Catholics.

Father De Souza is not wrong to suggest what he did, but I think there is much more that he could have said.

Perhaps one reason why very few people have shown up to support the Pope is because he is here to apologize for something that the previous Pope already apologized for… almost 15 years ago.

In 2009 Pope Benedict apologized for the role of priests and other Church personnel in the Residential Schools system, and expressed his specific regret for any sexual abuse that took place.

This means that Pope Francis is here apologizing for something that has already been addressed. Of course, I can see how there is merit in a Pope showing empathy for a people, no issue with that. However, the people that Pope Francis is appeasing are not Catholics, nor even fans of the Pope at all.

Anyone who has been paying attention, or is a practicing Catholic, knows that the Church in this country, and the Pope, have both done all they could to right any wrongs that took place.

We have had national inquiries, paid out a zillion dollars, gone through education seminars in public institutions, and basically had the whole narrative shoved down our throats for more than a decade.

A massive national commission took place – the Truth and Reconciliation Commission – the truth came out, and people reconciled. Lots of hugs and tears took centre-stage and we have all mourned as a country many times over the wrongs that were done.

Pope Francis is not doing anything to help the cause of reconciliation in Canada that was not done before his visit.

Taking all this into account, it also has to be said that the line between admitting that wrong doings have taken place and being brow-beaten by your enemies has long since ben crossed.

Last summer when the rage about the non-existent mass graves was spreading faster than monkey pox in June, anti-Catholic hatred was at an all-time high.

Churches were destroyed, statues of the Virgin Mary were desecrated, and family members flipped into borderline diabolical moods when their loved ones tried to explain what really happened – I should know, I saw it myself.

It was as if a year and a half of pent up lockdown anger was masterfully unleashed by Trudeau’s fake news about Residential Schools which were supposedly concentration camps. It was a dark period, to say the least… and as I said, it was all fake.

Not that abuse at residential schools was fake, but the narrative that sparked the new wave or rage was fake.

The significance of this cannot be underestimated.

The Pope is here to apologize for the residential school epoch because the country lost its collective mind and demanded an apology because of the discovery of mass graves that do not exist!

Maybe Catholics haven’t showed up to see the Pope because we don’t need to be reminded of how much our country and our leadership hate us.

Maybe we aren’t showing up because we don’t need to sit and hear a group of bishops talk about forgiveness etc., when they have done nothing to dispel the myth of the mass graves, even though it is now in the mainstream press that it was a hoax.

Francis has contributed to our suffering

The reasons why Canadian Catholics are unenthused about Pope Francis’ visit go deeper than the narrative about Indigenous issues.

Last year when Chairman Trudeau initiated a federal jab-passport system to fly and take trains in Canada, this left millions of Canadians without the ability to travel across this extensive nation to see loved ones.

The reality is, most who objected to the jabs were faithful Christians, many of them Catholic, and many for pro-life reasons.

We don’t want abortion tainted jabs, especially for a flu.

Now, the government did allow for people to request religious exemptions. But, when Catholics would apply, does the Holy Father know what the airlines would say?

The same thing happened at workplaces – I saw some of these denied religious exemption requests myself.

It is safe to say that Pope Francis’ statements have not only been doctrinally alarming at times, but he has also made life for pro-life Canadians worse as he was used as the poster-boy for why Canadians should just shut up and roll up their sleeve like the Pope.

It is a sad state of affairs when Catholics are not excited to see the Pope, but it is even sadder when the Pope is used as justification to persecute those Catholics that don’t care to see him in the first place.