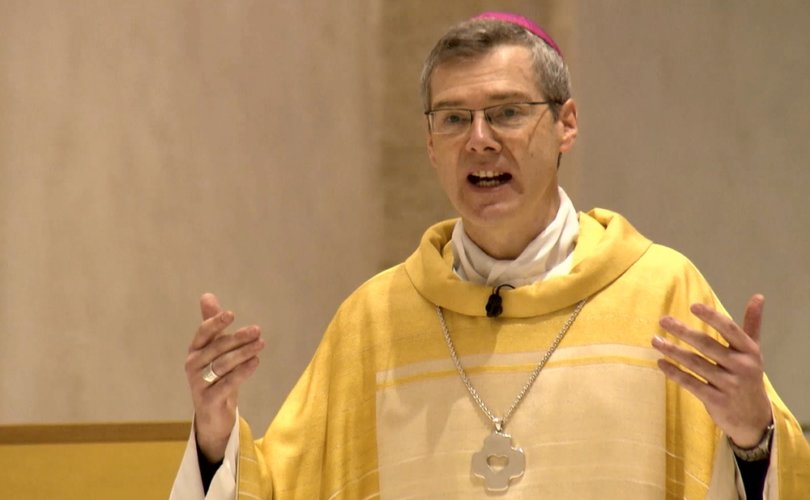 (LifeSiteNews) — The Italian blog Messa in latino, which is just now in the international media for having accurately reported on a scandal inside the Vatican, revealed yesterday that Pope Francis has chosen Bishop Heiner Wilmer as the new Prefect of the Dicastery for the Doctrine of the Faith. LifeSite has been able to confirm this report with its own senior source in Rome.

Should Wilmer be appointed, it would confirm that Pope Francis supports the German Synodal Path attacking the foundations of the Catholic Church and faith.

Our sources “in the highest places” would now confirm (though we know that the Holy Father is unpredictable to the last) that the next Prefect of the Dicastery for the Doctrine of the Faith will be Bishop Heiner Wilmer [whose doctoral thesis deals with none other than the Modernist-adjacent Maurice Blondel, and not in a critical way], current Bishop of Hildesheim, replacing current Prefect Card. Luis Francisco Ladaria Ferrer, in prorogatio since July 1, 2022. […] Unfortunately, if confirmed, this would be a very bad Christmas present from St. Martha’s House, given also his ultra-progressive positions advocated in the infamous “synod” taking place in Germany.

LifeSite reached out to a senior source in Rome who confirmed this story, adding that it is a “real possibility” but not “absolutely certain” since Pope Francis is known suddenly to change his mind. It seems that Cardinal Blase Cupich of Chicago was another candidate under consideration for this post.

It is absolutely clear that, should Pope Francis choose to pick a modernist bishop from Germany as the new head of the Dicastery for the Doctrine of the Faith, he would put an official seal of approval on the contested German Synodal Path that has so far been with an unprecedented amount of resistance from all parts of the Catholic world, with so many cardinals, bishops and priests issuing statements of criticisms that it is impossible to list them all here.

In September, the assembly composed of clergymen and laity approved of homosexuality, women’s ordination, and gender fluidity. Next to calling for female ordination and an abandonment of the Church’s rejection of contraception, homosexual relationships, and cohabitation, the German bishops also wish to give lay people much more voting power in the Church, thereby not only attacking the Church’s teachings but also her very hierarchical structure.

In light of the gravity of this assault on the very foundations of the Church and her teachings, Cardinal Gerhard Müller, the former head of the then-Congregation for the Doctrine of the Faith (now a dicastery), had issued in February 2020 a stern rebuke of the German bishops’ path of reform. At the time, he discussed the first official assembly of the German bishops’ “synodal path,” comparing it with the Enabling Act of the German National Socialists in 1933 and saying that it “rescinds the Constitution of the Church of Divine Right,” thereby turning away from the Church’s “religious mission.” Cardinal Walter Brandmüller called the September 2022 assembly and its approved documents a “mass apostasy from Holy Scripture and Tradition.”

Bishop Wilmer, SCJ, of Hildesheim, Germany, is one of the strong supporters of the controversial German Synodal Path. He voted for the controversial September 2022 document on sexuality of the German Synodal Path that did not meet the necessary two-third majority of bishops and regretted that it failed. He claimed that “it is not possible that the Church’s teaching is hurting or discriminating people.”

Wilmer, who speaks fluent Italian and is, according to Katholisch.de, the website of the German bishops, well-connected in Rome, is also a supporter of the discussion of female ordination and the end of celibacy.

In October 2022, the 61-year-old Wilmer had a private audience with Pope Francis, where he was able to discuss the German Synodal Path with the Pope. The German priest had been made a bishop by the Pope in 2018 and is the former Superior General of the Congregation of the Priests of the Sacred Heart.

In the same year, Wilmer caused a stir by claiming in light of the abuse crisis that “abuse of power is in the DNA of the Church,” adding that “we have to say goodbye” to the claim that “the Church in herself is pure and immaculate.” In April 2020, during the corona-related lockdowns of churches in the world, Wilmer condemned Catholic faithful who are “fixated only on the Eucharist.”

We can only repeat that, should Pope Francis choose Bishop Wilmer as the new head of the Dicastery for the Doctrine of the Faith, he would let his mask fall – which many conservative Catholics still try to uphold – that he is critical of the German “path of destruction” (in the words of Bishop Rudolf Voderholzer). It is to be hoped that this piece of news will warrant sufficient cries of indignation, thereby forestalling such an appointment.

LifeSite reached out on December 14 to the Vatican’s Press Office, asking them to confirm or deny this report on Bishop Wilmer’s upcoming appointment. We shall update the report should we hear from them.