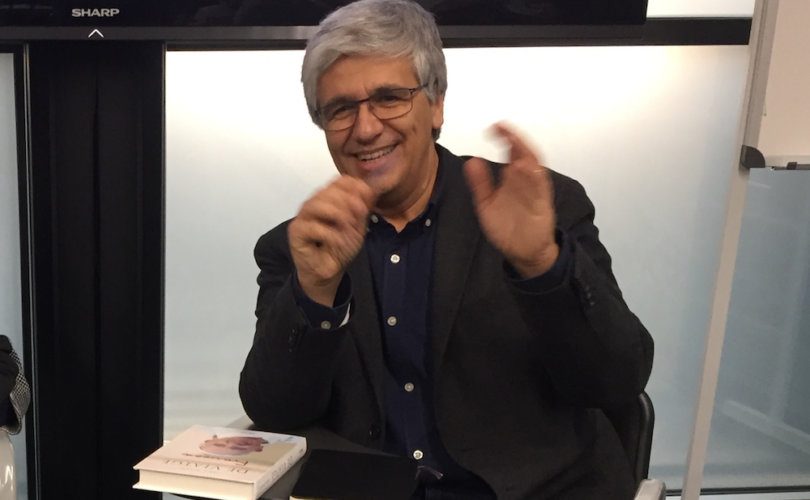 November 5, 2018 (LifeSiteNews) — A journalist considered one of Pope Francis’ “unofficial spokespeople” claimed in stunning remarks about Archbishop Theodore McCarrick’s alleged sexual abuse of seminarians that the root problem is not homosexuality but clericalism, and also asserted that “No, McCarrick did not have homosexual relations.”

In a September 14 article written for La Stampa's Vatican Insider, Andrea Tornielli regrets that “for weeks, the political-media groups and journalists who collaborated with former nuncio Carlo Maria Viganò in writing, editing, and then spreading his 'memorandum,' including the sensational request for the resignation of the Pontiff, have insisted that the problem in the Church is not child abuse but homosexuality.”

“But is this really the case?” the Italian journalist asked. “Is the root, the origin of the problem of abuse really to be found in the homosexuality of priests?”

While Tornielli admits that statistics show “that a large part of the violence against children sees male adolescents as victims” and while he points to the existence of “gay lobbies,” he nevertheless doubts that it is “right to focus it all on homosexuality.”

“An unprejudiced look at McCarrick's sad story shows exactly the opposite,” the journalist then states. In light of the testimonies of the former seminarians of the Diocese of Metuchen and Newark, says Tornielli, there can be seen “a different story.” “Even for McCarrick's case, in fact, the problem is clericalism, the abuse of power and conscience, which comes before sexual abuse and is committed by people – priests or bishops – who can never be considered equal to their victims,” the papal confidant explained.

For one who is close to the Pope, “the McCarrick disaster … is an obvious case of psychological abuse, abuse of power and conscience and sexual abuse. It has been treated for too long only as a case of homosexual practice.” Further commenting on this matter, Tornielli said: “No, McCarrick did not have homosexual relations. He harassed and abused seminarians in the name of his episcopal power, making them understand that going to the beach house with him (…) was an obligatory step to be better known to him and to land a priestly ordination.”

Tornielli is not the only influential person under this current pontificate who tries to steer the discussion away from the obvious fact that the majority of clerical sexual abuse is homosexual abuse. In nearly the same fashion, Cardinal Reinhard Marx – a member of Pope Francis' Council of Nine – had his vicar general declare that “There are now, repeatedly, those claims that the studies (on clerical abuse in Germany) have shown that the abuse victims are mostly boys and the offenders mostly men.” “I wish to give a warning,” Beer then added, “not to draw – because of this observation – a direct connection between homosexuality and abuse.” In Beer’s eyes, such an approach would “constitute an unbearable discrimination of persons with homosexual inclinations. I explicitly reject that and I ask us all, not to follow here such slogans.” Marx' second hand also claimed that “all experts say that these abuse cases are less, or not at all, about homosexual deeds or homosexual relationships, but, rather, that they are about an expression of an immature sexuality.”

Swiss Bishop Marian Eleganti, however, made it clear recently that such a denial of the homosexual component in the abuse crisis “is itself a cover-up.” He stated in a press release: “No one denies that clericalism plays a role, but nevertheless it is in the Church proven that the abusers are mainly homosexual. The silencing of this fact is an additional form of cover-up.”

Speaking about the Church's standing rule not to admit homosexuals to the priesthood, the auxiliary bishop of Chur commented: “I expect that those responsible in the Church will follow this instruction and take actions accordingly.” For Eleganti, the Church should publicly admit “that in the clergy of the Church, we have been dealing for decades now with mainly homosexual criminals.”

This bishop's sense of urgency stems from the deep desire to protect the little ones from further harm. That this can be achieved, one needs to face the facts. And the Church – starting with Pope Francis' unofficial spokesman” Tornielli – should stop making simple negations of simple facts, such as “No, McCarrick did not have homosexual relations.”