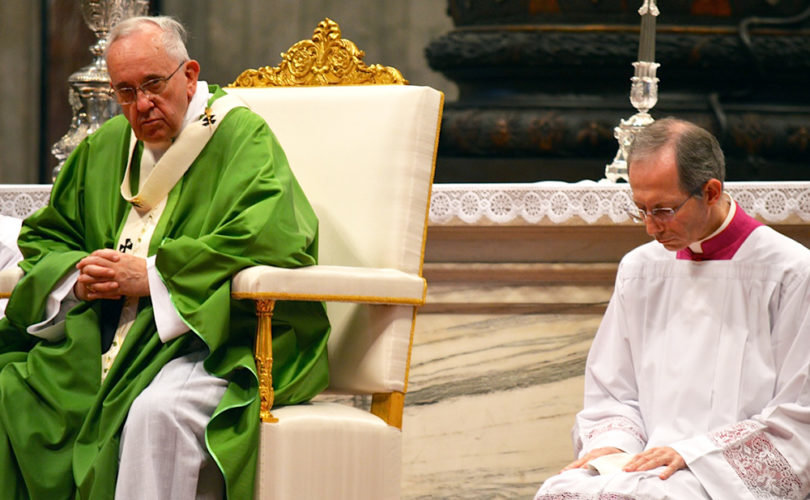 ROME, September 14, 2018 (LifeSiteNews) – In a homily delivered on the Feast of the Exaltation of the Cross, Pope Francis curiously returned to the theme of Satan as the “Great Accuser” for the third time this week.

Once again, the Pontiff seemed to be warning the faithful against being critical of his prelates, and perhaps the way he himself is dealing with the avalanche of clergy sex scandals that has tumbled down upon the Vatican in recent weeks.

Commenting on today’s first reading, Pope Francis said that the people who complained “were punished by serpents,” adding that this refers to the ancient serpent, Satan, the “Great Accuser,” according to a Vatican News report.

Although “Jesus was lifted up and Satan was destroyed,” said Pope Francis, “the ancient serpent that was destroyed still barks, still threatens but, as the Fathers of the Church say, he is a chained dog.”

He further warned, “Do not approach him and he will not bite you; but if you try to caress him because you [are] attracted to him as if he were a puppy, prepare yourself, he will destroy you.”

Pope Francis seems to be reiterating his warning from his homily yesterday, implying that those who are critical of the hierarchy are being mindlessly lured to aligning themselves with the work of the devil, as if they were drawn to pet a cute puppy.

In so doing he dismisses critical thinking of the laity, priests, and bishops who have expressed outrage over the clergy sex scandals and their alleged cover-ups.

While warning against the work of the “Great Accuser,” the Pope himself points an accusing finger.