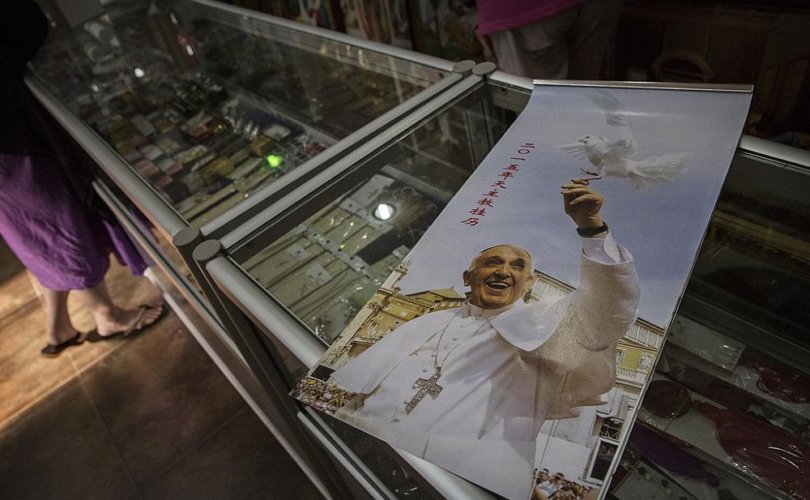 October 21, 2020 (LifeSiteNews) — I find Pope Francis long on generalities and short on specifics, especially where China is concerned.

He speaks eloquently about the need to defend everyone’s religious freedom in his new encyclical, Fratelli Tutti, saying this principle “must not be forgotten in the journey towards fraternity and peace.”

And yet at the same time, Cardinal Pietro Parolin, the Vatican secretary of state, has just signaled that the deal with the Chinese Communist Party (CCP) will be renewed, even though that deal has not improved religious freedom in that country, for Catholics or for anyone else. Indeed, many outside observers — including yours truly — believe that the Sino-Vatican Agreement has actually provided cover to the CCP for its ongoing assault on the religious freedom of all believers in China — Catholic, Protestant, and Muslim.

What is happening in Xi Jinping’s China today is nothing short of a second Cultural Revolution. This, like the first, involves a vicious attack on religious believers of all stripes.

It is not merely the members of the Underground Church whose churches are being destroyed and defaced and whose priests are being imprisoned and tortured. The parishioners and clergy of the Patriotic Church, which answers directly to the CCP, are also suffering intense persecution. The idea that the state-run church would be a safe haven for Catholics in China, which some in the Vatican initially subscribed to, has proved to be a mirage.

Since the signing of the agreement, all religious activity in China has been put under the direct control of the officially atheistic CCP. New rules have been promulgated, the gist of which is to require the clergy and staff of the Patriotic Church to serve the CCP first and God second. They must report every Mass held, and every penny collected, to the authorities. They must ensure that no minors are allowed in the church and use only the Party-approved translation of the Bible in their services, all the while being subjected to constant surveillance by the state.

As the walls have closed in on believers in China, the Holy Father has never offered a single public criticism of the mistreatment of the suffering Church there. And the renewal of the agreement, apparently imminent, is taking place without any indication that the Vatican has demanded, or that the CCP has made, any concessions to Catholic concerns at all. No jailed Catholics have been released from prison that we know of; no strictures on religious activity have been relaxed; and, most importantly, no new bishops have been appointed to China’s dozens of empty sees.

More than two years after the signing of the original agreement, no one outside the Vatican has ever been allowed to see exactly what it says. This secrecy has put faithful Catholics in China, in particular, at tremendous risk of being deceived by the authorities. It has left the CCP free to misrepresent the terms of the agreement (whatever they are) in order to coerce believers into compliance on the grounds that “the Vatican says you must obey us.” There is reason to believe they are doing just that.

— Article continues below Petition —
PETITION: Urge Governor DeSantis to give parents freedom in school choice
Show Petition Text
1107 have signed the petition.
Let's get to 2500!
Thank you for signing this petition!
Add your signature:
Show Petition Text

I am afraid that the Church in Hong Kong will be the next to suffer persecution. It was that fear that drove 88-year-old Cardinal Joseph Zen of that city to travel to Rome two months ago in the hope of meeting with the Holy Father. The Holy Father could not find time to meet with this outspoken critic of the CCP about the future of Hong Kong’s hundreds of thousands of Catholics.

Had Pope Francis agreed to a meeting, he would have learned from Cardinal Zen how the CCP has torn up the Sino-British Joint Declaration and is in the process of obliterating the liberties Hong Kong has long enjoyed. Perhaps he would have had second thoughts about renewing an agreement with a regime that has broken virtually every international agreement it has ever signed.

The Pope himself writes in Fratelli Tutti, “Forgiveness does not entail allowing oppressors to keep trampling on their own dignity and that of others, or letting criminals continue their wrongdoing. Those who suffer injustice have to defend strenuously their own rights. … If a criminal has harmed me or a loved one, no one can forbid me from demanding justice.”

I pray that the Pope comes to understand that the CCP is not simply a left-wing political party — a variation on the kind of political organization he is familiar with from Latin America. It is, rather, a transnational criminal organization that practices the kind of race-based national socialism not seen on Planet Earth since the heyday of the Third Reich. It is “trampling on the dignity” of the Chinese people, especially those of religious faith, on a daily basis.

I am sure that the Pope opposes the injustices being suffered by believers in China, and he certainly has the moral authority to make a difference if he were to speak out openly and forcefully against these. But so far he has not done so.

Pope Francis does continue the practice, begun by Pope Benedict XVI in 2007, of celebrating a Day of Prayer for the Church in China every May 24. This year, Pope Francis assured Chinese Catholics of the prayers of the universal Church, saying:

Dearest Catholic brothers and sisters in China, I wish to assure you that the universal Church, of which you are an integral part, shares your hopes and supports you in your trials. She accompanies you with prayer for a new outpouring of the Holy Spirit, so that the light and beauty of the Gospel might shine in you as the power of God for the salvation of those who believe. … [I pray that you] might be strong in faith and steadfast in fraternal union, joyful witnesses, promoters of charity and hope, and good citizens.

The Church in China is indeed undergoing trials — trials that have perhaps been intensified, not mitigated, by the signing of the ill considered Sino-Vatican Agreement. And the CCP will not be placated, as the Pope seems to believe, if Catholics merely comport themselves as “good citizens.”

In the view of the Chinese Communist Party, Catholics can never be “good citizens.” Nor can anyone whose primary loyalty is to something other than the Party … such as God.

Steven W. Mosher is the President of the Population Research Institute and the author of Bully of Asia: Why China’s Dream Is the New Threat to World Order.