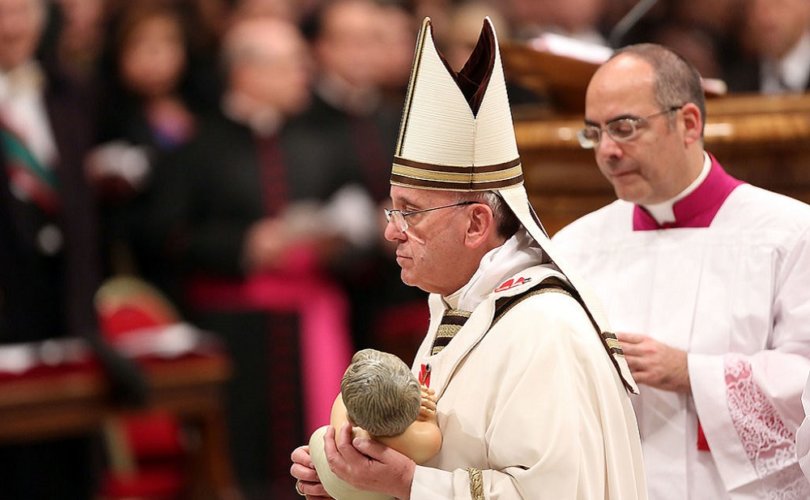 October 5, 2020 (LifeSiteNews) — In Fratelli Tutti, the new encyclical of Pope Francis released yesterday, pro-life Catholics are confronted with a political emphasis that ignores abortion. In line with U.S. bishops who have eschewed the fight for the right to life of unborn children, Pope Francis has explicitly excluded abortion from the political concerns laid out in his latest encyclical.

In paragraph 188 of Fratelli Tutti, Pope Francis says politicians’ “biggest concern should not be about a drop in the polls, but about finding effective solutions to the phenomenon of social and economic exclusion, with its baneful consequences: human trafficking, the marketing of human organs and tissues, the sexual exploitation of boys and girls, slave labour, including prostitution, the drug and weapons trade, terrorism and international organized crime.”

The fact that abortion is left out of this laundry list is scandalous. Especially since he follows up this list by saying, “Such is the magnitude of these situations, and their toll in innocent lives, that we must avoid every temptation to fall into a declarationist nominalism that would assuage our consciences.”

There were two other times in the encyclical where I thought he might at least redeem himself on that score, only to have my hopes dashed.

Paragraph 255 begins, “There are two extreme situations that may come to be seen as solutions in especially dramatic circumstances, without realizing that they are false answers that do not resolve the problems they are meant to solve and ultimately do no more than introduce new elements of destruction in the fabric of national and global society.” Here, surely the Pope would mention abortion? No. “These are war and the death penalty,” he writes.

Finally, there is one other spot in the 194-page document where it seems that the right to life for unborn children would be a no-brainer. It comes in paragraph 279. “One fundamental human right must not be forgotten in the journey towards fraternity and peace,” writes the Pope. “It is religious freedom for believers of all religions,” comes the unwelcome explanation.

Those who have consistently read Pope Francis’s writings, especially as they touch on politics, are not surprised by his approach. In his 2018 exhortation, he ridiculed the Catholic understanding of migration as “secondary” to abortion. “Some Catholics consider [immigration] a secondary issue compared to the ‘grave’ bioethical questions,” he said.

“That a politician looking for votes might say such a thing is understandable, but not a Christian.” Speaking of abortion and immigration, he criticized those who regard immigration as secondary, “as if there are other more important matters, or the only thing that counts is one particular ethical issue or cause that they themselves defend.”

The stark contrast with the previous pontificates on the question demonstrates a rupture with the past that cannot be overlooked. Pope St. John Paul II wrote in his 1988 apostolic exhortation, Christifideles Laici: “the common outcry, which is justly made on behalf of human rights — for example, the right to health, to home, to work, to family, to culture — is false and illusory if the right to life, the most basic and fundamental right and the condition of all other personal rights, is not defended with maximum determination.”

Pope Benedict XVI, before becoming Pope in 2004, wrote the Bishops of the United States, “Not all moral issues have the same moral weight as abortion and euthanasia.” In his letter “Worthiness to receive Holy Communion” then-cardinal Joseph Ratzinger (Pope Benedict XVI) also wrote when he was still the Church’s doctrine chief, “[I]f a Catholic were to be at odds with the Holy Father on the application of capital punishment or on the decision to wage war, he would not for that reason be considered unworthy to present himself to receive Holy Communion.”

“There may be a legitimate diversity of opinion even among Catholics about waging war and applying the death penalty, but not however with regard to abortion and euthanasia,” Ratzinger continued.

There are two token references to abortion in the text of the Fratelli Tutti. One is where, in the context of human-trafficking, the Pope calls it “[a] perversion that exceeds all limits when it subjugates women and then forces them to abort.” Then, in speaking of our “throwaway” culture, he includes “the unborn” as he laments that parts of the human family “can be readily sacrificed for the sake of others.”

The contrast in the writings of Pope Francis and his predecessors is so striking that it is hard to see it as anything but a rupture with the past, a change of what was always considered unchangeable. After reading his writings from the beginning of his papacy and being bombarded with the reality of rupture with the past evident even as a simple laymen, one must learn to read Francis with caution, even suspicion that Catholic concepts will be twisted to suggest another gospel.

For an upcoming conference on Catholic education at which I’m speaking, I was reading through encyclicals by Pope Leo XIII from the late 1800s. I was struck with the incredible clarity, the faith presented in its unhindered simplicity, the shining truth of Christ evident in the writing from the vicar of Christ. I felt free to open my mind, heart, and soul to the truth without fear of being led astray and in anticipation of real education, elucidation, and illumination.

We must beg heaven to restore the Church.