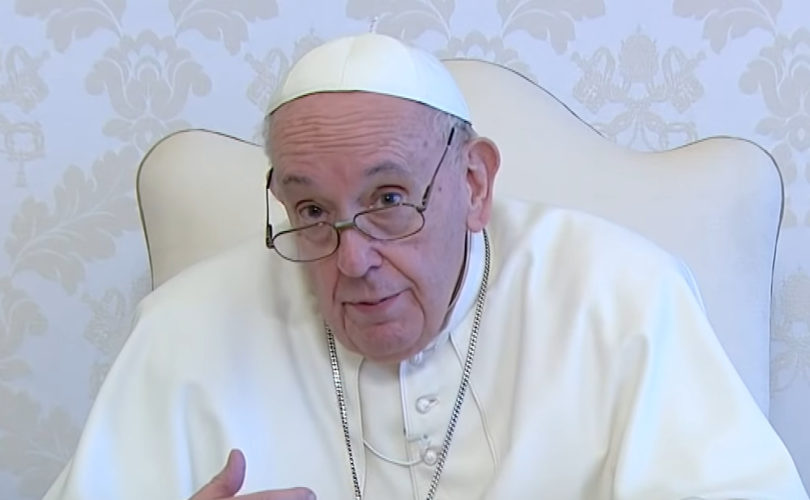 May 11, 2021 (LifeSiteNews) — Pope Francis appeared on the giant screen of the “Vax Live” concert aired online last Saturday, giving a five-minute message in Spanish to plead for an “internationalism of vaccines” together with a “new solidarity” in order to heal our “Common Home.” There was not a single mention about the moral problems associated with vaccines that were developed or tested by the use of aborted fetal cell lines.

The “Vax Live” concert was filmed on May 2 before a masked, but vast audience at SoFi Stadium in Inglewood, California, and then staged and extended for worldwide broadcasting in a propaganda effort not only for vaccination, but for “social justice” and “equity,” as well as “saving the planet,” making clear the ideological connection between these themes.

“Vax Live” particularly boasted of its “philanthropic” partners, the Bill and Melinda Gates Foundation and the Allan and Gill Gray Philanthropy, and focused on the rich countries giving vaccines to the poorer countries, while at the same time waiving patents on the new vaccines developed to stop COVID.

The message was clear: in order to get back to normal, there is only one solution: making the COVID-19 vaccine available to everyone all over the world. It is not by chance that the NGO that launched the initiative is called “Global Citizen,” sponsored by corporate partners such as Procter & Gamble, Coca-Cola, Forbes, and Sustainable Brands.

Other partners included MSNBC, NBCUniversal, the Thomson Reuters Foundation, and House of Mandela. Global Citizen’s website makes frequent references to the Bill and Melinda Gates Foundation with whom it has partnered since 2014. It also features a video by Melinda Gates promoting contraception under the title, “This Clever Video Shows How the Pill Can Break the Cycle of Poverty.”

“Vax Live” showed itself to be a concentrate of mainstream catchwords playing on people’s emotions of fear of COVID-19 (to which some 3 million deaths, mainly among those older than 65 years of age are attributed, compared to at least 50 million mainly 25-40-year-olds who died in 1918 of the Spanish flu when Earth had about 2 billion inhabitants, four times fewer than today).

But it also stressed, even more insistently, the pain and sadness felt by all people across the planet because of COVID restrictions: not being able to see friends and family, increased poverty, not being able to join concerts such as the one used to promote the vaccine.

The very political leaders who set up these restrictions and who should be held responsible for them, because it is they that threw the globe (except China, of course) into the depths of economic crisis, all joined in to preach the new gospel of vaccination. Pope Francis — playing a political and not a religious role — was joined by Justin Trudeau, Joe and Jill Biden, French President Emmanuel Macron, Spanish Prime Minister Pedro Sanchez, the head of the European Commission Ursula von der Leyen, Italian President Mario Draghi, the WHO leader and former Ethiopian communist “Dr. Tedros,” and others, all touting the vaccine as the way to regain freedom.

Pope Francis’ video message started out with the words: “You receive warm greetings from this elderly man, who does not dance or sing like you, but who believes with you that injustice and evil are not invincible.”

As far as the dancing and singing went, with innumerable American and international stars, it was certainly a relief that Pope Francis did not join: garish, vulgar, and lascivious probably sums them up best. The performances were interspersed with moralizing talks and emotional homages to the “front-line workers” who protected the world while everyone was cowering (or required to be cowering) at home.

The Pope proclaimed his utopian dream of universal fraternity in messianic terms: “In the face of so much darkness and uncertainty, we need light and hope. We need paths of healing and salvation. And I mean healing at the root, healing the cause of the evil and not just the symptoms. In these sick roots we find the virus of individualism, which does not make us freer or more equal or more brotherly or sisterly, but rather makes us indifferent to the suffering of others.”

“And a variant of this virus is closed nationalism,” he went on, “which prevents, for example, an internationalism of vaccines. Another variant is when we put the laws of the market or intellectual property above the laws of love and the health of humanity. Another variant is when we create and promote a sick economy, which allows a few very rich people, a few very rich people, to own more than all the rest of humanity, and production and consumption patterns to destroy the planet, our ‘Common Home.’”

This is an interesting mix of exhortation to charity and political standpoints. Comparing our present ills to a mutating virus, Pope Francis sees “light and hope” not in turning to God and His law, but in sharing goods and knowledge in a borderless world — the old socialist and communist dreams which sound generous, and are often triggered by genuine injustices, but end up in collectivist nightmares simply because they do not take reality into account, as Pope Leo XIII explained in Rerum Novarum, which sets out the social doctrine of the Church.

More profoundly, of course, these global solutions are in fact open revolts against the order of society and its wise hierarchy, because they reject God’s plan for humanity and deny mankind’s original refusal to serve God, pretending to bring love and harmony into a broken world without the saving grace of Our Lord.

One wonders, though, how the Pope can at the same time join an event promoted by the world’s richest and most powerful, and talk about the “sick economy” that concentrates wealth into a few hands. Would we all be threatened with mass vaccination today if it were not for the fabulous wealth of Bill Gates and his kind?

The Pope went on to join the dots between the COVID crisis, the environmental crisis with its “global warming” scare, and social justice, which more often than not is a catchphrase that rests on the leverage of class struggles in their “variant” forms: haves against have-nots, Whites against Blacks, men against women, and so on.

He said: “These things are interconnected. Every social injustice, every marginalization of some into poverty or misery also affects the environment. Nature and people are linked. God the Creator instills in our hearts a new and generous spirit to abandon our individualism and promote the common good: a spirit of justice that mobilizes us to ensure universal access to vaccines and the temporary suspension of intellectual property rights; a spirit of communion that allows us to generate a different, more inclusive, just and sustainable economic model.”

It’s the kind of language that “social justice” promoters have used for decades, but the inclusion of the vaccine as the motor for a “different, more inclusive, just, and sustainable economic model” was made possible by COVID-19 and its shameless instrumentalization.

Repeating previous remarks of his, Pope Francis said: “The pandemic has placed us all in crisis, but do not forget that we do not come out of a crisis the same as before: either we come out better or we come out worse.”

He added, by way of conclusion: “May God, physician and savior of all, comfort the suffering, and receive into His kingdom those who have already departed. And I also ask God, for us, pilgrims on earth, to grant us the gift of a new fraternity, a universal solidarity, that we may recognize the good and the beauty He has sown in each one of us, to strengthen the bonds of unity, of common projects, of shared hopes.”

This is how Pope Francis ended up as a special guest performer at a concert that featured Selena Gomez, a self-proclaimed abortion advocate, as its host, and gave a big part to Prince Harry and Meghan Markle and other celebrities from the glossy magazines, such as Jennifer Lopez who joined a sexually explicit halftime show run by Pepsi for the 2020 Super Bowl. And if he didn’t know about that, his staff should certainly have warned him.