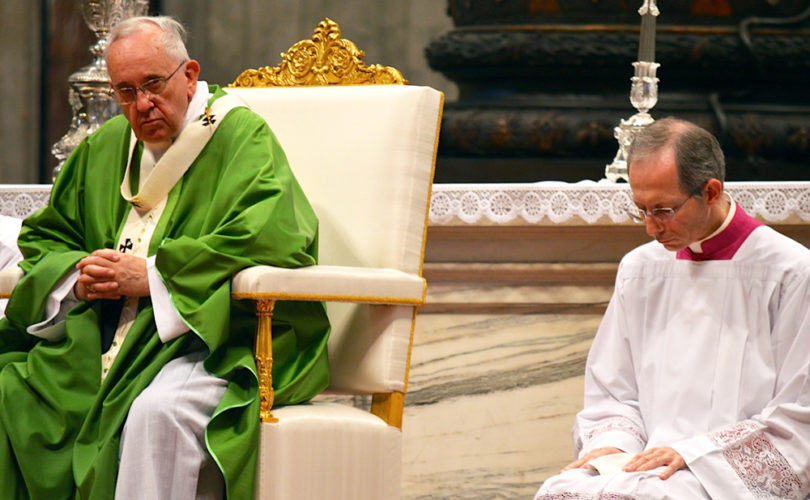 ROME, June 20, 2018 (LifeSiteNews.com) — Noted Vatican correspondent Edward Pentin tweeted today his reaction to Pope Francis’ statement that he learned of the dubia only “from the newspapers,” recalling that Pope Francis in fact “received the dubia two months before the cardinals went public and instructed ++Muller (Cardinal Muller) not to respond.” Thereafter Pentin posited, “Memory lapse perhaps.”

In new interview, #Pope said he'd heard about the cardinals’ letter (dubia) criticizing him “from the newspapers” but he received the dubia two months before the cardinals went public and instructed ++Muller not to respond. Memory lapse perhaps. https://t.co/3UCdk5nZtl

Speaking with Reuters Rome correspondent Philip Pullella, the Pope spoke of criticism by Cardinal Raymond Burke and the other three dubia Cardinals. According to Reuters, the Pope said “he had heard about the cardinals’ letter criticizing him ‘from the newspapers.’” The Pope knocked the cardinals, saying it was “a way of doing things that is, let’s say, not ecclesial, but we all make mistakes.”

In fact, however, the dubia letter was sent to the Pope and copied to then-Vatican doctrine chief Cardinal Gerhard Muller, two months before they were made public. The original letter was sent privately to the Pope on September 19, 2016, and was only released to the public on November 14, 2016.

The dubia letter asked the pope five short questions that call for “yes or no” answers that would immediately clarify the meaning of the confusion-plagued document Amoris Laetitia.

Before releasing the document publicly, the dubia cardinals were informed that the Pope had instructed Cardinal Muller not to respond to the document, and that no response would be forthcoming.

The cardinals thus stated in their public release of the letter, “The Holy Father has decided not to respond. We have interpreted his sovereign decision as an invitation to continue the reflection, and the discussion, calmly and with respect. And so we are informing the entire people of God about our initiative, offering all of the documentation.”

In a note explaining to the faithful their release of the letter, the cardinals reveal the letter had its “origin in a deep pastoral concern,” about the “grave disorientation and great confusion of many faithful regarding extremely important matters for the life of the Church.”