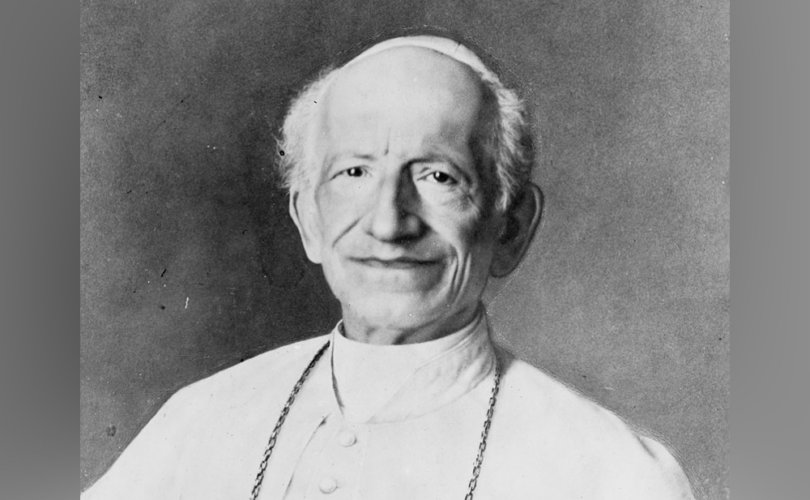 May 30, 2019 (LifeSiteNews) — In my last article, I looked at a number of Pope Leo XIII’s masterful social encyclicals, which he issued in order to offer guidance to the Church in her delicate and difficult dealings with modern nation-states and modern economic situations. Leo was grappling with the emergence of a thoroughly secularized way of life and worldview, severed from the Christian past and obsessed with the pursuit of worldly “progress.” He was among the first to size up the full magnitude of the change that was taking place as the Western world threw off the Redeemer’s sweet yoke to run after fashionable -isms like liberalism, materialism, and consumerism, which promised ever expanding freedom while achieving little more than the gradual destruction of the natural and supernatural institutions that console and delight man during his sojourn on earth.

Here I shall briefly comment on several magnificent encyclicals that reward our careful study today. They would make an excellent syllabus for a parish reading group or a book club. Their clarity, strength, and relative brevity set the highest possible bar for papal magisterial documents and, often with breathtaking timeliness, demonstrate the weaknesses and errors into which more recent papacies have drifted.

In his encyclical on Christian matrimony, Arcanum Divinae (1880), Leo XIII speaks of the Creator’s original intention for marriage and the family and offers a forceful critique of the novel theories and liberal legislation that were just beginning to undermine the family at that time. Read from our vantage almost 150 years later, we can see how precisely accurate were all of the pope’s predictions about the deleterious effects of such ideas and laws. More importantly, the pope beautifully develops the positive side of his subject. This encyclical single-handedly inaugurated modern Catholic teaching on marriage and family.

One of the first acts of Leo XIII’s pontificate was the promulgation of “On the Restoration of Christian Philosophy,” more familiarly known as Aeterni Patris (1879). The unfinished business of the First Vatican Council, which had been suspended late in 1870 by the outbreak of the Franco-Prussian War, included a thorough review and reform of Catholic studies in philosophy and theology. This Leo himself took up, drawing on his own experience of the systematic power, synthetic genius, and timeless relevance of St. Thomas Aquinas. Aeterni Patris was, as it were, the Magna Charta of the movement of Thomistic restoration, or better, invigoration. The encyclical is notable for its grand tour of Christian intellectual history and its balanced but decisive accolades for Aquinas.

Again, it was in keeping with the First Vatican Council’s effort to articulate the harmony of faith and reason and to respond to the haughty spirit of historical-critical reductionism that Leo XIII issued his encyclical on the study of Holy Scripture, Providentissimus Deus (1893). Leo’s encyclical robustly proclaims the divine inspiration, inerrancy, and infallibility of the sacred writings, reaffirming and explaining traditional Catholic doctrine on the dual authorship, divine and human, of the books of Scripture; the consequent guarantee of freedom from all error; the unbreakable connection among Scripture, Tradition, and Magisterium; and the various senses of Scripture discerned by the Fathers of the Church.

In 1896, Leo XIII brought out his encyclical Satis Cognitum, on the unity of the Church, which covers the fundamentals of ecclesiology so well that Pope Paul VI in his inaugural encyclical Ecclesiam Suam (1964) drew special attention to it as a key source for upcoming discussions at the Second Vatican Council. Leo’s encyclical focuses squarely on the question: did Jesus Christ really intend to found a church — a visible and hierarchically structured body of believers on earth, charged with the mission of carrying His Gospel and extending the effects of His redemption to the ends of the earth? The pope succinctly marshals scriptural evidence, the testimony of Tradition, and rational arguments to bring home his conclusions about the uniqueness and unicity of the Church of Christ with its episcopal structure. In all my years of studying ecclesiology and apologetics, I have not seen any presentation of these themes that is as direct, uncluttered, elegant, and inspiring as Leo XIII’s.

Although each of the nearly one hundred encyclicals promulgated by Leo XIII offers insightful commentary on the modern situation and good advice for Catholics, there are three from around the turn of the twentieth century that have struck me for years as emblematic of this pope’s acute theological vision, uplifting religious fervor, and bold cultural critique: Annum Sacrum on consecration to the Sacred Heart (1899), Tametsi Futura on Jesus Christ the Redeemer of mankind (1900), and Mirae Caritatis on the Holy Eucharist (1902).

Each speaks of the immense love of God given to us in Christ Jesus, the mercy extended to us castaways of Adam’s shipwreck, the divine truth in which alone our minds can find peace amid the storms of ever more bewildering and contradictory philosophies of life. The pope is not content merely to assert that such is our dire condition and such our salvation; he spells it out step by step: here is where the false philosophies will lead you, Modern Man, and here is how God can rescue you from the pit of destruction that grows with your neglect and contempt of His Good News. I must say that it would have been beneficial had the Fathers of the Second Vatican Council been asked to study these prior to their arrival in Rome in 1962. It would have given them a much needed dose of realism, a reinvigoration of their sensus Catholicus, and models of brevity and depth.

In this trio of encyclicals, Leo XIII issues an impassioned plea for conversion, beginning with the Church herself and moving outward in concentric circles to embrace all mankind. And, like all the popes before and after him, Leo beckons us to gather around the most sublime of all sacred mysteries on earth: the Holy Eucharist, the Body and Blood of our Redeemer, and to let It gather us into one Church, one Body, full of the lifeblood that heals the fallen sons of Adam.