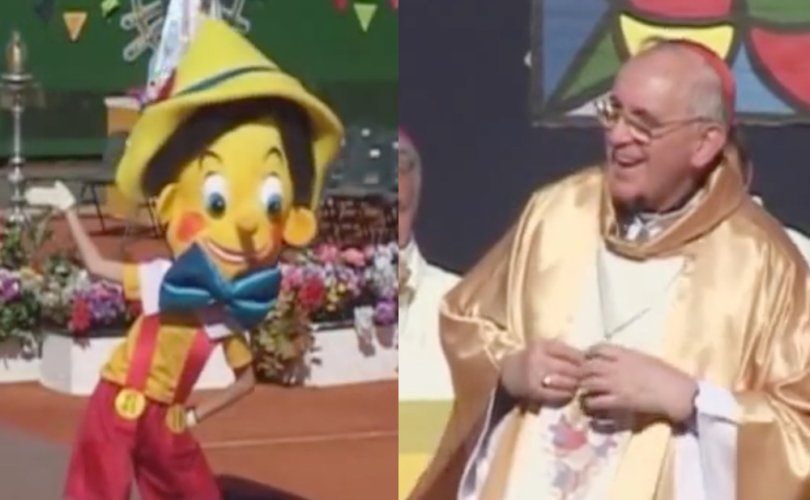 January 10, 2019 (LifeSiteNews) – In the early days of the Francis regime, the world was treated to a wide and colorful array of insulting language from the Vicar of Christ directed at Catholics faulted for remaining “intransigently faithful” to tradition, with the implication that these were not like himself: a 1970s progressive, full of admiration for the United Nations and the European Union. In recent times the flood of insults has somewhat subsided. The pontiff has even warned us against the dangers of indulging in this verbal sport.

We might nevertheless wish to revisit an earlier official papal document, the Apostolic Exhortation Evangelii Gaudium of 24 November 2013, where the then-new pope furnished a classy definition of those who exemplify what he called “self-absorbed promethean neopelagianism.” They (he says)

ultimately trust only in their own powers and feel superior to others because they observe certain rules or remain intransigently faithful to a particular Catholic style from the past. A supposed soundness of doctrine or discipline leads instead to a narcissistic and authoritarian elitism, whereby instead of evangelising, one analyses and classifies others, and instead of opening the door to grace, one exhausts his or her energies in inspecting and verifying. (n. 94)

While it is undeniable that such a tendency, or at least the temptation to it, can exist in any Christian at any time—and therefore also in communities that pride themselves on being “traditional” to one degree or another—one would be remiss to neglect a monumental fact: it is precisely a self-absorbed and neo-pelagian spirit that has infiltrated nearly all celebrations of the Novus Ordo. None other than Joseph Ratzinger condemned the sociological conception of liturgy as “a work of this particular community,” one that trusts in the power of its active participation and feels superior to over 1,500 years of Latin liturgy because it “observes certain rules,” namely what popes have promulgated in the past 50 years, and “remains intransigently faithful to a particular Catholic style from the past,” namely, the 1960s and 1970s, in which Catholicism seems to be fatally trapped, like the mastodons of yore trapped in tar pits.

No doubt, a genuine evangelizing thrust could not emerge from such an adulterated form of Christianity. This perhaps explains why, at least in the Western world, the strongest growth is being seen in parishes, oratories, chapels, and religious communities that are expressly committed to “soundness of doctrine and discipline,” which—surprise!—turns out to open doors to the grace of conversion. In a phrase used by a priest of the Fraternity of St. Peter, we see people “falling in Eucharistic love”!

The old Latin Mass is explicitly anti-Pelagian, categorically rejects Moralistic Therapeutic Deism, and clearly reflects the true nature of sacrifice and the negative theology (sin, hell, penance, etc.) that is reduced or obscured in the new liturgical books. Considered in itself, it is altogether a better antidote to the disease sketched out in Evangelii Gaudium. In no way could the Mass sanctified St. Gregory the Great, St. Thomas Aquinas, St. Ignatius of Loyola, and Blessed John Henry Newman ever be written off as “a particular Catholic style from the past.”

If a traditionalist gets a bit drunk, so to speak, on the rich drink poured out for him by tradition, and is tempted to think himself at the end of the path when he is only just beginning to slough off the mortal coil of modernity, let’s rebuke him, but have mercy; if he “exhausts his energies” picking splinters out of others’ eyes, let him be kindly and calmly corrected. These are incredibly confusing and difficult times, and most sheep are doing their best without the guidance of any shepherd worthy of the name.

The “good” traditionalist may consider himself “superior” precisely and only in this respect, that he submits his soul to be formed by a liturgy in which the tendencies Francis condemns are not inherent; that he emphatically does not trust in his own powers but in the universal tradition of the Church; that he trusts the power of Christ shown, lived, and poured forth in the traditional liturgy and its attendant devotions.

Our greatest concern should rather be for the masses of Catholics whose ordinary liturgical experience forms in them nothing other than neo-Pelagian, self-absorbed tendencies. Though I can’t prove it, I have a hunch that if you surveyed the average attendant of a Latin Mass (the average “traditionalist”?) and a typical Novus Ordo congregant, the “neopelagiometer” would sound the alarm much sooner over the latter than over the former.

Let us return, then, to the quotation from Pope Francis, and let us speak forthrightly: it is a tendentious caricature, a portrait of the worst traditionalist in his worst moment. It targets the traditionalist who is bitter and spoiled, not the one in healthy bloom. In this sense, it it unjust and mean-spirited towards the large number of Catholics who are striving to love the Lord and their neighbor with the aid of traditional practices of the Faith. It would be as absurd to accept this portrait as it would be to say, about Catholics who attend the Novus Ordo, that all of them are tambourine-touting, liturgical dance-promoting, helium-balloon-sporting, lukewarm relativists.

But then, Pope Francis has shown the world that he has a tendency to be a manipulator, an ideologue, a dictator, and a relativist about dogma, so perhaps it is not so worthwhile to take too seriously these problematic things he says.