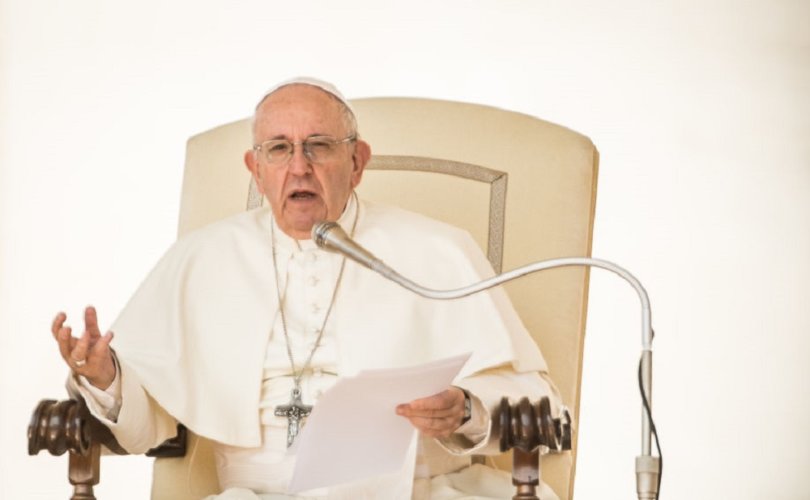 February 27, 2020 (LifeSiteNews) — Pope Francis has published his Lenten message for 2020, encouraging all Catholics continually to return to the “mystery of the death and resurrection of Jesus,” “the cornerstone of our personal and communal Christian life.” While insisting in traditional terms on reconciliation with God and conversion in this “favorable season,” Pope Francis mostly spoke of the horizontal effects of the special Christian time of penance — which he did not mention — whose fruits he mainly named as “a means of personally participating in the building of a better world.” And, of course, of commitment to bettering the “environment.”

In particular, Francis spoke of the “wounds of the crucified Christ” as being “present in environmental disasters, the unequal distribution of the earth’s goods, human trafficking in all its forms, and the unbridled thirst for profit, which is a form of idolatry.”

There was no mention of man’s necessary atonement for sins, nor of the possibility of everlasting life with God obtained through the sacrifice of His only Son.

Pope Francis instead focused on the social aspect of the “paschal mystery.”

“Putting the paschal mystery at the center of our lives means feeling compassion towards the wounds of the crucified Christ present in the many innocent victims of wars, in attacks on life, from that of the unborn to that of the elderly, and various forms of violence,” he wrote.

The appeal to see Jesus Himself and to serve Him in alleviating the suffering of our neighbor is classic. “In truth I tell you, in so far as you did this to one of the least of these brothers of mine, you did it to me,” said the Lord Jesus (Matth. 25:40).

But Pope Francis’s message for Lent mostly remains at this level: a call to be “the salt of the earth and the light of the world,” as its final words say, but without recalling that the object of conversion, sacrifice (another absent word), and charity is to obtain God Himself.

Pope Francis did call all Christians to see the “paschal mystery as the basis of conversion.”

“Christian joy flows from listening to, and accepting, the Good News of the death and resurrection of Jesus. This kerygma sums up the mystery of a love ‘so real, so true, so concrete, that it invites us to a relationship of openness and fruitful dialogue’ (Christus Vivit, 117). Whoever believes this message rejects the lie that our life is ours to do with as we will. Rather, life is born of the love of God our Father, from his desire to grant us life in abundance (cf. Jn 10:10).”

But still in his horizontal vein, the Pope Francis added: “If we listen instead to the tempting voice of the ‘father of lies’ (Jn 8:44), we risk sinking into the abyss of absurdity, and experiencing hell here on earth, as all too many tragic events in the personal and collective human experience sadly bear witness.”

Once again, this is not false, but it reductively speaks only of “hell here on earth,” while not recalling that the worst Hell is the everlasting suffering that awaits those who reject God’s commandments, His grace, and His mercy. “Tragic events” are the price we pay for sin — our own sins and the sins of mankind — but they are not the end of all goodness and joy, but instead God’s merciful gateway that allows us to obtain Heaven.

Recalling his words to the young in his post-synodal exhortation Christus Vivit after the Youth Synod, Pope Francis invited all Christians to contemplate the suffering Jesus and to be reconciled to Him and to be “saved over and over again” through the confession of sins:

In this Lent of 2020, I would like to share with every Christian what I wrote to young people in the Apostolic Exhortation Christus Vivit: ‘Keep your eyes fixed on the outstretched arms of Christ crucified, let yourself be saved over and over again. And when you go to confess your sins, believe firmly in his mercy which frees you of your guilt. Contemplate his blood poured out with such great love, and let yourself be cleansed by it. In this way, you can be reborn ever anew” (No. 123). Jesus’ Pasch is not a past event; rather, through the power of the Holy Spirit it is ever present, enabling us to see and touch with faith the flesh of Christ in those who suffer.

Pope Francis called on Christians to pray, especially in this time of Lent: “May we not let this time of grace pass in vain, in the foolish illusion that we can control the times and means of our conversion to him.” He also recalled that God’s saving will led the Father to burden his Son with the weight of our sins, thus, in the expression of Pope Benedict XVI, ‘turning of God against himself’ (Deus Caritas Est, 12).”

The Lenten message’s final paragraphs speak of Francis’s particular vision of earthly goods and the well-being of our planet and the economy. Together with the classic reproof of “unbridled thirst for profit, which is a form of idolatry” (one cannot serve two masters, God and Mammon…), the pope wrote, going one step farther than the traditional view of evil, that the “wounds of the crucified Christ” are present not only in suffering human beings, but in “environmental disasters.” In today’s language, these often designate man-made pollution or abuse of the Creation, but the identification between Christ and nature and the material goods of Creation is problematic and recalls the pantheistic overtones of Querida Amazonia.

Again, human-trafficking is of itself a disorder and an evil, but “the unequal distribution of the earth’s goods” is a given of material reality and the hierarchic structure of mankind, where the rich are evil not because they have more than others, but because they choose not to use their wealth to alleviate the misery of the needy.

In designating the “unequal distribution” of earthly goods as akin to killing the innocent, Pope Francis moves the question of individual charity to the political plane, suggesting that “equal distribution” is to be sought after.

He did recall in the following paragraph that “there is a need to appeal to men and women of goodwill to share, by almsgiving, their goods with those most in need, as a means of personally participating in the building of a better world.”

But he went on to say: “Charitable giving makes us more human, whereas hoarding risks making us less human, imprisoned by our own selfishness. We can and must go even further, and consider the structural aspects of our economic life.”

What does he mean exactly by this? The answer will come in March. That is when, in Assisi, at the invitation of Pope Francis, a convention will take place in Assisi under the title “The Economy of Francesco.”

He wrote in his message for Lent: “For this reason, in the midst of Lent this year, from 26 to 28 March, I have convened a meeting in Assisi with young economists, entrepreneurs and change-makers, with the aim of shaping a more just and inclusive economy. As the Church’s magisterium has often repeated, political life represents an eminent form of charity (cf. Pius XI, Address to the Italian Federation of Catholic University Students, 18 December 1927). The same holds true for economic life, which can be approached in the same evangelical spirit, the spirit of the Beatitudes.”

The “Francesco Economy’s” website explains that young people are being called to Assisi “to make a commitment in the spirit of Saint Francis, in order to make the economy of today and tomorrow fair, sustainable and inclusive, with no one left behind.”

Speakers will include population control advocate Jeffrey Sachs, Nobel prizewinners Amartya Sen and Muhammad Yunus, and many others.

Jennifer Nedelsky, who will be a keynote speaker, deserves a special mention: this professor of law and political science has concentrated on Feminist Theory in her academic career, and the way gender and feminist theory “intersect” with multiple fields of law, as well as feminine autonomy.

Among the events is one called “Slow down” — an “anti-growth” workshop? — and a party. “Thematic villages” will be associated with themes such as “Policies and happiness,” “CO2 of inequalities,” and “Economy is woman.”