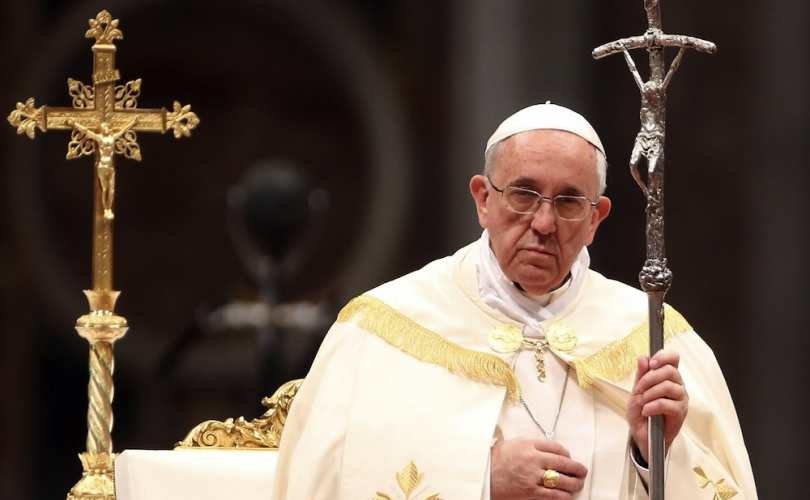 ROME, June 18, 2018 (LifeSiteNews) — Despite a devastating silence from Pope Francis during both the Irish abortion referendum three weeks ago and Thursday’s vote in his homeland of Argentina to legalize abortion, on Saturday Pope Francis condemned abortion in no uncertain terms.

The Pope will be headed to Ireland this August and may be met there with some who are upset at his lack of support for the pro-life effort in the once-Catholic nation.

Speaking to the Forum of Family Associations on June 16, he compared the killing of disabled unborn to “the murder of children” by the Nazis to purify the race.

“I have heard that it's fashionable — or at least common — in the first months of pregnancy to make tests to see if the child is healthy or has problems… , the first proposal in that case is: ‘let's send it away,’” Pope Francis said. “I say this with pain. In the last century the whole world was scandalized by what the Nazis did to purify the race. Today we do the same, but with white gloves.”

The Pope explained his reluctance to speak out in the heat of national political debates in 2016. On February 18, 2016 on the papal plane returning from Mexico, the Pope was asked by an Italian reporter about the then-current debate in Italy regarding legislation on homosexual civil unions. The Pope replied, “The Pope doesn’t get mixed up in Italian politics…. Because the pope is for everybody and he can’t insert himself in the specific internal politics of a country. This is not the role of the pope, right?”

Strangely though on that same flight the Pope felt able to insert himself into American politics. It was during the Presidential Primaries and the Pope freely criticized Donald Trump. “A person who only thinks about building walls, wherever they may be, and not building bridges, is not Christian,” he said.

On certain political issues such as global warming the Pope has indeed inserted himself not only into national but international politics, writing a whole encyclical on the need for action against climate change. The timing of the encyclical just before the Paris climate accord deliberations could not have been more political.

When President Trump met with the Pope shortly after pulling the USA out of the Paris climate accord, Pope Francis made sure to give the President a copy of his encyclical Laudato Si’.

Nevertheless, his reluctance to speak on less politically correct or perhaps non-liberal issues at a time when they could have political influence is longstanding.

In the beginning of the pontificate when Pope Francis made his visit to Brazil, he was asked by a local reporter on the plane, “You did not speak about abortion, about same-sex marriage.  In Brazil a law has been approved which widens the right to abortion and permits marriage between people of the same sex.  Why did you not speak about this?”

Pope Francis replied, “The Church has already spoken quite clearly on this.  It was unnecessary to return to it, just as I didn’t speak about cheating, lying, or other matters on which the Church has a clear teaching!”

When the reporter pressed again saying, “But the young are interested in this,” Pope Francis said, “Yes, though it wasn’t necessary to speak of it, but rather of the positive things that open up the path to young people. Isn’t that right! Besides, young people know perfectly well what the Church’s position is.”

But Pope Francis has spoken at other times about the Church’s teaching on same-sex ‘marriage’. In fact, in the meeting Saturday the Pope also commented on it.

“Today, it pains me to say,” said the Pope, “we talk about ‘diversified’ families: different types of families.”  He added, “But the human family as an image of God, man and woman, is only one.”

Let us pray that despite the countervailing evidence, this statement may mark a turning point for Pope Francis and that the thought of the slaughter of innocent unborn children in his homeland may prevail over his reluctance to engage politically even on politically incorrect matters.