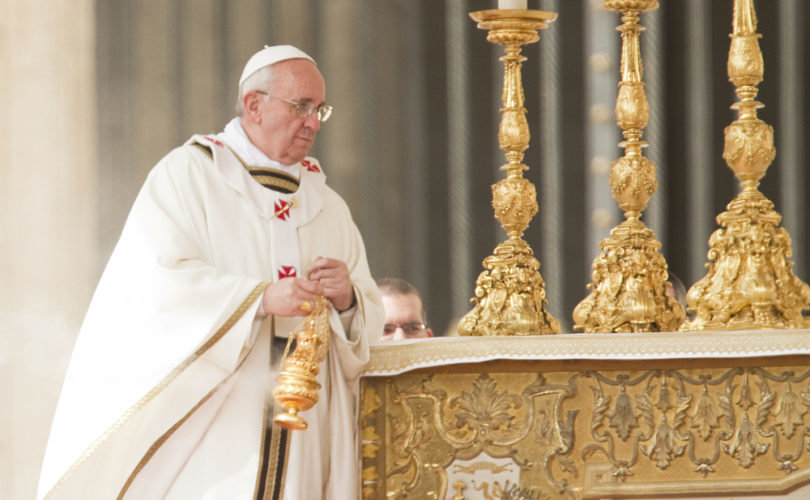 Oct. 7, 2015 (LifeSiteNews) – During the Extraordinary Synod of 2014 it became apparent that while Pope Francis remained silent for most of the proceedings in the Synod Hall, he was offering a running commentary on the proceedings via his daily homilies at Casa Santa Marta. It appears that the 2015 Synod may follow the same pattern.

Tuesday morning’s homily centered on the theme of hard hearts not allowing God’s mercy. It came the morning after the Synod’s first working day – a day which was dominated by Cardinal Erdo’s talk defending traditional Catholic teaching on the hot button issues of divorce and remarriage and of homosexuality.

People with hardened hearts think “my preaching is more important, my thoughts are more important, that whole list of commandments that I must observe are more important,” the Pope said, in a reference sure to be taken by some as being aimed against those Synod Fathers that are working to maintain the traditional teaching of the Church.

Referring to the day’s Scripture reading about Jonah the Prophet, the pope said it was a miracle that “he abandons his stubbornness, his rigidity, to obey the will of God, and he did what the Lord commanded him,” referring to Jonah’s eventual adherence to God’s demand that he warn Nineveh of God’s coming judgment.

Ironically, it is the presumed targets of the Pope’s remarks – prelates like Cardinal Raymond Burke – that, rather than being rigid, are the ones most willing to lovingly warn those given to sin of the need to repent. Unlike Jonah, however, such prelates rejoice in the conversion of sinners.

They recognize that true mercy in the eyes of the Church consists in lovingly presenting the truth, as the Church’s document outlining how to deal pastorally with “homosexual persons” states.  Stressing the need for “clearly stating that homosexual activity is immoral,” the document says, “we wish to make it clear that departure from the Church's teaching, or silence about it, in an effort to provide pastoral care is neither caring nor pastoral.”

The Letter to the bishops of the Catholic Church on the pastoral care of homosexual persons” adds: “Only what is true can ultimately be pastoral. The neglect of the Church's position prevents homosexual men and women from receiving the care they need and deserve.”