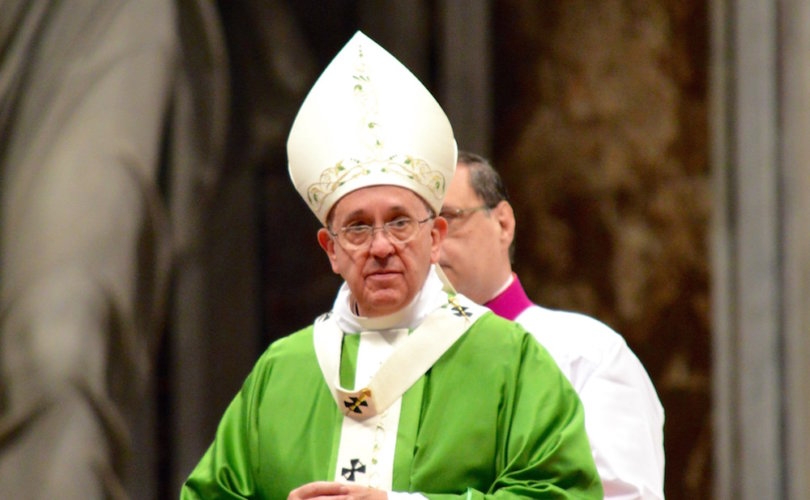 Editor’s note: This is part 3 of a series examining Pope Francis’ papacy over the last three years. See part 1 here and part 2 here.

June 15, 2016 (LifeSiteNews) – It’s one of the most frequent talking points of Pope Francis. It’s definitely part of his appeal for the media and simultaneously one of the most hurtful things for those inside the Church for whom the faith means everything. I’m speaking of the Pope’s penchant for castigating faithful adherents of the Catholic faith as “obsessed,” “doctors of the law,” “neo-pelagian,” “self-absorbed,” “restorationist,” “fundamentalist,” “rigid,” “ideological,” “hypocritical,” and much more.

The effect of the all-too-frequent barrage from the lips of the Pontiff himself is potentially deadly. It confirms the prejudice of the world against faithful Christians as the media constantly portrays them – as hypocrites and worse. Moreover, it permits the false categorization of adherent Christians with fundamentalist Islamic radicals who need to be suppressed to ensure public safety.

Who can blame the media for such comparisons when the Pope has made them himself? “Fundamentalism is a sickness that we find in all religions,” said the Pope in November while flying home from Africa. “Among Catholics there are many, not a few, many, who believe to hold the absolute truth,” he added. “They go ahead by harming others with slander and defamation, and they do great harm. … And it must be combated.”

Given the inordinate amount of time he spends condemning them, it would be ludicrous to suggest the Pope is only speaking of the infinitesimal number of practicing Catholics who do have a deranged puritanical bent.

It has now been freely admitted by Vatican authorities that there was an extreme liberal group of Cardinals known as the St. Gallen group who backed the papal election of Cardinal Bergoglio.  But even if Pope Francis has an ideological dispute with conservative Cardinals such as Cardinal Raymond Burke, his repeated public criticisms against Catholics who hold to the “absolute truth” is potentially a great danger to the faithful.

In addition to the fact that Pope Francis’ remarks along these lines contradict his predecessors (see end of this article), they are a grave danger because secular authorities are all too willing to crush freedom of religion for Christians with the excuse that they are stomping out dangerous fundamentalism. With the Pope’s own words they can equate Catholics who would hold to all of the Church’s teachings with Islamic or Hindu fundamentalists who employ violence and torture as means of conquest.

Recall the chilling words of Princeton Professor Robert George in his famous address, “No more comfortable Catholicism.” He noted that the world has no animosity toward a nominal Catholic who just goes to Mass, but it’s much different when it comes to one who “actually believes what the Church teaches on issues such as marriage and sexual morality and the sanctity of human life.”

He said that it is still possible to be a “safe” or “comfortable Catholic” today “if one in fact does not believe what the Church teaches, or, for now at least, even if one does believe those teachings but is prepared to be completely silent about them.” Professor George warned, however, that there are severe consequences awaiting those who will not yield to the pressure. “To be a witness to the Gospel today is to make oneself a marked man or woman,” he said.

It is exactly that distinction — between faithful and nominal Catholics — that the world is reading into Pope Francis’ regular haranguing of “fundamentalist” Catholics as opposed to others. The frequency is such that it is beyond the scope of this article to point to all the instances in the last three years of the pontificate. But these few should exemplify the point (emphasis added throughout):

– From the September 19, 2013 Jesuit magazine interview:  “If the Christian is a restorationist, a legalist, if he wants everything clear and safe, then he will find nothing… Those who today always look for disciplinarian solutions, those who long for an exaggerated doctrinal ‘security,’ those who stubbornly try to recover a past that no longer exists—they have a static and inward-directed view of things. In this way, faith becomes an ideology among other ideologies.”

– Apostolic Exhortation Evangelii Gaudium (The Joy of the Gospel) released November 26, 2013: “A supposed soundness of doctrine or discipline leads instead to a narcissistic and authoritarian elitism, whereby instead of evangelizing, one analyzes and classifies others, and instead of opening the door to grace, one exhausts his or her energies in inspecting and verifying. … Since it is based on carefully cultivated appearances, it is not always linked to outward sin; from without, everything appears as it should be. But if it were to seep into the Church, it would be infinitely more disastrous than any other worldliness which is simply moral.”

– In his October 19, 2014 closing address to Extraordinary Synod on the Family, Pope Francis spoke of “traditionalists” with their “hostile inflexibility,” and their failure to allow themselves to be “surprised by God.”

– In the January 2015 book-length interview, The Name of God is Mercy, Pope Francis says “scholars of the law” are “the principal opposition to Jesus; they challenge him in the name of doctrine.” And he adds, “This approach is repeated throughout the long history of the Church.”

– In a September 2015 radio interview with Radio Milenium, Pope Francis said, “Fundamentalists keep God away from accompanying his people, they divert their minds from him and transform him into an ideology. So in the name of this ideological god, they kill, they attack, destroy, slander. Practically speaking, they transform that God into a Baal, an idol. … No religion is immune from its own fundamentalisms. In every religion there will be a small group of fundamentalists whose work is to destroy for the sake of an idea, and not reality.”

– In his closing address to the Synod on the Family in October of 2015, the Pope condemned “the closed hearts which frequently hide even behind the Church’s teachings or good intentions, in order to sit in the chair of Moses and judge, sometimes with superiority and superficiality, difficult cases and wounded families.”

– Pope Francis’ homily on January 18, 2016 reads: “Christians who say ‘it’s always been done that way,’ and stop there have hearts closed to the surprises of the Holy Spirit. They are idolaters and rebels who will never arrive at the fullness of the truth.”

– The official Vatican radio report on his homily of June 9, 2016 reads: “Pope Francis warned on Thursday against an excessive rigidity, saying those within the Church who tell us ‘it’s this or nothing’ are heretics and not Catholics.”

Pope Francis has himself recognized the increasing “educated” or “polite persecution” that seeks to restrict rights to freedom of religion and conscientious objection. What he evidently does not see is that his rhetoric against Catholics who he perceives as “fundamentalist” is providing fodder for the enemies of Truth to oppress faithful Catholics, even violently. Let us pray with urgency that Pope Francis might have his sight restored.

Quotes from Church documents and his predecessors that run counter to the sentiments expressed by Pope Francis (emphasis added throughout):

– St. Paul writes in 2 Thessalonians 2:14: “Therefore, brethren, stand fast: and hold the traditions, which you have learned, whether by word or by our epistle.”

– The canon of the Mass in the Extraordinary Form as prayed for over 1000 years noted that the Mass was offered the Church’s hierarchy and “all orthodox believers of the catholic and apostolic faith.”

– Speaking to bishops of Latin America in 1979, Pope St. John Paul II said: “To be watchful for purity of doctrine, the basis in building up the Christian community, is therefore, together with the proclamation of the Gospel, the primary and irreplaceable duty of the Pastor, of the Teacher of the faith. How often Saint Paul emphasized this, convinced as he was of the seriousness of the accomplishment of this duty (cf. 1Tim 1:3 –7; 18 –20; 4:11, 16; 2Tim 1:4–14). Over and above unity in love, unity in truth is always urgent for us.”

– In 1984 Pope St. John Paul II told bishops from Chile: “Our firmness will come from this solid foundation, since the Church today, despite all the difficulties that encircle it, cannot speak in a way different from that which Christ spoke. For this reason, the Church, especially the Pastors, should be united around the Absolute Truth, that is God, and proclaim it in all its integrity and purity.”

– Pope St. John Paul II wrote in the 1993 encyclical Veritatis Splendor: “An attitude of this sort (one who makes his own weakness the criterion of the truth about the good) corrupts the morality of society as a whole, since it encourages doubt about the objectivity of the moral law in general and a rejection of the absoluteness of moral prohibitions regarding specific human acts, and it ends up by confusing all judgments about values.”

– In a speech made in the Vatican Basilica on the eve of his election to the papacy, Cardinal Joseph Ratzinger said: “Today, having a clear faith based on the Creed of the Church is often labeled as fundamentalism. Whereas relativism, that is, letting oneself be ‘tossed here and there, carried about by every wind of doctrine’, seems the only attitude that can cope with modern times. We are building a dictatorship of relativism that does not recognize anything as definitive and whose ultimate goal consists solely of one's own ego and desires.”

– Under Pope Benedict, in 2007 the Vatican Congregation for the Doctrine of the Faith taught: “For a long time, the reason for evangelization has not been clear to many among the Catholic faithful. It is even stated that the claim to have received the gift of the fullness of God’s revelation masks an attitude of intolerance and a danger to peace.”