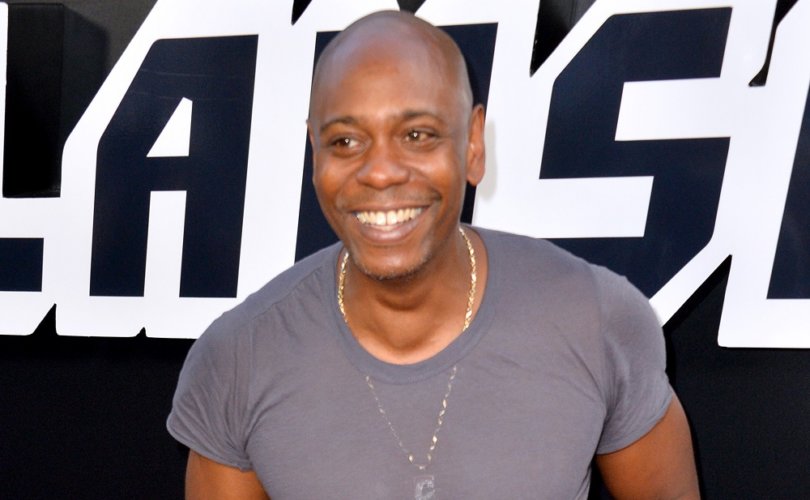 (LifeSiteNews) — At this point, the story of a celebrity getting attacked by the LGBT community for a heresy of some sort is a normal part of the news cycle. The story of a celebrity deciding to ignore the backlash, however, is uncommon enough that comedian Dave Chappelle is on his fourth or fifth news cycle. Chappelle, like J.K. Rowling, appears to be too big to cancel. We’ll find out soon.

The background is simple enough. Chappelle, a foul-mouthed comic with a total lack of reverence for progressive dogmas, announced on his recent Netflix special “The Closer” that he was on “Team TERF” (Trans Exclusionary Radical Feminist) and mocked the sensitivities of trans activists. At one point, he highlighted the ridiculousness of Bruce Jenner winning “Women of the Year” Award after “being a woman” for only a year.

Trans activists reacted with predictable outrage. Chappelle, who is on tour, ignored them, which increased the furor.

Netflix CEO Ted Sarandos first defended Chappelle, and then came out with a halfway apology, noting that he “should have led with a lot more humanity … I had a group of employees who were definitely feeling pain and hurt from a decision we made.” Netflix hasn’t pulled the special yet, but hairline cracks are already spreading in the leadership’s united front. Once corporate leaders start retreating, they generally don’t stop until they’re making a groveling televised apology to representatives of the rainbow coalition.

To hurry this process along, LGBT employees and their allies at Netflix hosted a walkout and a protest to put more pressure on Sarandos and the other executives. It was a relatively small but rowdy event, with angry activists chanting stereotypical slogans about the danger of Chappelle’s comedy and facing off with a single, jovial counter-protester hoisting a sign reading “Jokes Are Funny.” He was surrounded and the sign wrenched out of his hands and destroyed. The irony was lost on the attendees, who promptly accused the protester holding his empty sign-stick of having a weapon while ignoring the fact that they had ripped off his placard. Gaslighting is fundamental to transgender activism.

The media is delightedly pumping out copy and commentary on every condemnation of Chappelle for two reasons. First, a wildly famous comedian offside with key cultural power brokers is great for clicks and eyeballs on both Left and Right. And second, Chappelle is an anomaly: a celebrity who exposes the fact that cancel culture could die if we all just stopped playing along with it.

The reality is that even most celebrities don’t actually feel the moral outrage they produce when called upon by the LGBT community to do so. That’s why Chappelle got a standing ovation at the Hollywood Bowl after the Netflix Special was released. “If this is what being canceled is like, I love it,” he quipped.

“F— Twitter. F— NBC News, ABC News, all these stupid ass networks,” the 48-year-old comedian told the crowd. And with those crude remarks, he ensured that the media attacks would continue — he had leveled a direct attack on their power and exposed the vacuousness of their tactics.

Chappelle, of course, is pro-LGBT, pro-abortion, and pro-everything else that progressives want. He just wants to make jokes, expose inconsistencies, and make people laugh doing so. But for LGBT activists, laughter is verboten. As Bret Weinstein presciently noted, “Dave Chappelle isn’t in trouble for enflaming tensions over trans rights. He’s in trouble for defusing them.”

It’ll be interesting if Chappelle’s head ends up on a stick, or if he’ll join the small group of men and women too powerful to fall prey to the LGBT movement’s campaigns of vengeance.