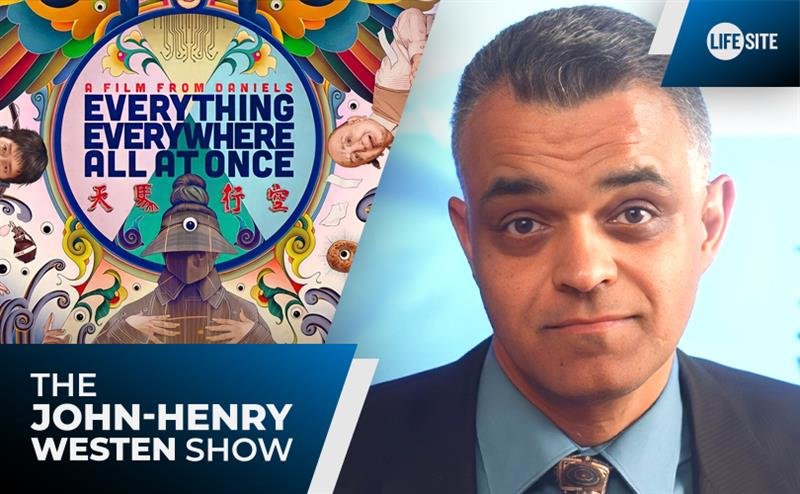 The multiverse element of the film leads to bizarre and intentionally mind-bending comedic elements.

In the end however, the great evil which prevents the full acceptance of homosexuality and its associated perversions is a thinly veiled portrayal of the Catholic Blessed Sacrament. In what is obviously meant to look like a Catholic Church, the heroine and her daughter are brought to the altar and behind the tabernacle curtain/veil is bread – not unleavened bread, but a blacked bagel which spins like a black hole and is ready to suck in the troubled youth and perhaps all humanity.

The heroine pulls her daughter back from that abyss by giving full acceptance to her homosexuality and introduces her daughter’s lesbian partner to the grandfather as her ‘girlfriend,’ after which all good and peace is restored.

The film is disgusting on many levels, but none more so than its distortion of Catholic teaching on homosexuality and related issues (never of course mentioning that it is Catholic teaching but only implying such with the use of the Eucharistic imagery).

Why is it that the Church opposes homosexuality and all of the new perversions which have stemmed from it? The answer to that is simple. It is all about love. The famous saying from homosexual advocates has always been “How can you be against love?” And the only proper response, although hardly ever used, is, “The only reason why we oppose homosexual sexual relations is love.”

True love for all people, especially our brothers and sisters who are tempted to engage in sexual behaviours that are harmful to them. We must love them enough to tell them that these behaviours are harmful for them. They are harmful physically, psychologically, and spiritually. God made us and gave us rules for our lives, not for His own benefit, not to deny us freedom, but for our own benefit – for our freedom – freedom from slavery to sin, which brings with it disease and death.

At LifeSite we have published for years the studies that prove the grave harm to the body which is caused by all sexual activity that runs counter to that which God intended – the loving union of one man and one woman in a free, faithful, fruitful giving to one another until death. Every other sexual engagement, be it with persons of the same sex, multiple persons, with pornography, is harmful, and thus God – who created us body and mind – warned us against such harmful behaviours.

And what is it beyond love that could motivate anyone to say such things nowadays when for speaking this truth we are called haters and bigots? It is love. To love our fellow men and women enough to tell them the truth on the true meaning and beauty of human sexuality.

For those of you who may not be aware of the harms of homosexuality and the many other sexual activities outside of God’s plan, here is the testimony of a homosexual activist which demonstrated this truth better than any study ever could.

Gens Hellquist, one of the complainants, was the executive director of the Canadian Rainbow Health Coalition, a leading homosexual activist group. He explained at length his concerns about the health status of homosexual men and women in Canada. He observed:

We have one of the poorest health statuses in this country … Health issues affecting queer Canadians include lower life expectancy than the average Canadian, suicide, higher rates of substance abuse, depression, inadequate access to care and HIV/AIDS.

And powerfully he concluded:

Now that we can get married everyone assumes that we don’t have any issues any more. A lot of the deaths that occur in our community are hidden, we don’t see them. Those of us who are working on the front lines see them and I’m tired of watching my community die.

And with regard to the transgender ideology that is so prevalent today, check out this medical doctor, Michelle Cretella, who explains in one minute the harm of the ideology, better than most could do in a whole book.

You’ll want to check out that whole interview with Dr. Cretella here, which was conducted by Tradition, Family and Property.

But how many people are hearing this truth today? Almost nobody. And the saddest thing of all is that the very ministers God has put in charge of teaching His truth on human sexuality have for the most part remained silent.

Believe it or not, the Vatican once specifically warned against silence on the hard truths of homosexuality.  The man who became Pope Benedict XVI, while he headed up the Congregation for the Doctrine of the Faith, issued a public document directed to the Bishops of the Catholic Church saying that SILENCE about the Church’s teachings regarding the spiritual harm of homosexual acts presents a false charity which is “neither caring nor pastoral.”

The 1986 CDF document entitled “Letter to the Bishops of the Catholic Church on the Pastoral Care of Homosexual Persons,” emphasized the necessity of “clearly stating that homosexual activity is immoral.”

The instruction to the bishops of the world on homosexuality added:

Today all that comes from the Vatican seems to be confusion and falsehood on this topic, so let’s have a look at the past.

In 2005, a few weeks after the election of Pope Benedict XVI, the late Cardinal Alfonso López Trujillo, who retained his position as the President of the Pontifical Council for the Family, gave one of the strongest statements defending the traditional family ever voiced in the Church.

Cardinal Trujillo said parliaments which “open the way for same sex ‘marriage’  … destroy piece by piece the institution of the family the most valuable heritage of peoples and humanity.” He called homosexual ‘marriage’ a “crime which represents the destruction of the world.”  And speaking of adoption of children by homosexual couples he said: “This would destroy the child’s future, it would be an act of moral violence against the child.”

With those strong words he awoke many to the dangers of the worldwide assault on the family.

Importantly, the Cardinal explained that it was out of love that the Church was pointing out these dangers.  Love not only for society at large but also for homosexuals themselves:

As I have said many times, homosexual peoples must be respected, loved and assisted.  We must help them overcome this situation if they seriously want to and help them realise that there is not only life on earth, there is another life … It is false to say that the Church does not love these people. She loves them and wants to lead them to eternal salvation.

In an address to the Roman Curia on December 22, 2008, Pope Benedict XVI capitalized on the popular ecology trend, calling for a “human ecology,” respecting the Creator’s natural order of relationships between man and woman.  In language very similar to that of Cardinal Trujillo, the Holy Father said, the Church must “protect man from self-destruction.”

If the Church speaks of the nature of the human being as man and woman, and demands that this order of creation be respected, this is not some antiquated metaphysics. What is involved here is faith in the Creator and a readiness to listen to the “language” of creation. To disregard this would be the self-destruction of man himself, and hence the destruction of God’s own work.

The Pope did not speak on the subject to be popular, not because he had some vendetta against gays.  He was preaching caritas in veritate, speaking the truth out of love; love for God and his Truth, love for mankind as a whole, but specifically love for his fellow human beings who are hurting themselves with destructive sexual lifestyles.

For his remarks he was castigated in the mainstream press. In thousands of news articles and talk shows around the world from Bulgaria to India, Pope Benedict was bashed for daring to say we should care as much for mankind as the tropical rainforests, that the harm caused by going against the Creator’s plan for human sexuality is destructive and hurtful.

The homosexual press had the most outrageous headlines on the topic. A Pink News headline in the U.K. read: “Pope Benedict learnt nothing from his time in the Hitler Youth” and “Pope Benedict’s latest outburst ‘justifies’ homophobic bullying and attacks.” But the coverage in the mainstream press was hardly less offensive.

A San Francisco Chronicle headline read: “Pope Benedict at Christmas: Preaching bigotry disguised as compassion,” and the Times of London opined: “Christmas was never meant to be about this.”

A good friend of mine, a former practicing homosexual and now a faithful Catholic, says of the Catholic position on homosexuality:

I don’t think the Catholic Church’s current attitude is abusive, I think it is love.  A loving parent sometimes has to tell a child not to play in a bad neighbourhood. The child may take offense and tell all his friends how mean his parents are. Perhaps the child goes to school and tells the teachers and principal that his parents are abusive … The parent sadly accepts this anger, judgment, and threatening calls from teachers, principals. But nevertheless, the parent has to stand firm because the parent loves the child and wants to protect the child from the dangers of the bad neighbourhood. Sometimes being a good parent means being hated by children who make unsafe demands.

It is all about love.