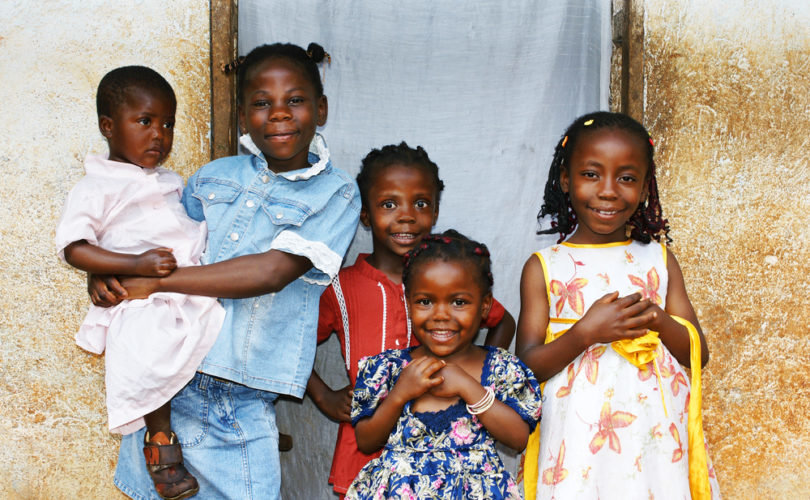 African family in their Sunday dresses.Shutterstock.com

September 27, 2017 (LifeSiteNews) – The language of the ongoing conversation about population and the environment is changing, but the overall effect remains the same, with the most vulnerable victimized.

Talking points have shifted away from directly addressing the topic of “population control” because “It is high risk — very, very easy to step on moral landmines in that territory,” according to a recent article published at Vox. “There’s much downside and not much upside to talking about population.”

Euphemism usage in no way decreases the danger to women, children and minorities, who remain in the crosshairs of those who want to engineer society according to their utopian environmental dreams.

How to slow population growth? Easy. Roberts proposes first to enable women to have only children they want and choose through “family planning” and second to “educate girls” and give them access to income opportunities outside the home.

“We know that women, given the resources and the choice, will opt for smaller families,”  Roberts asserted. “Those are the two most powerful levers to bend the population curve.”

Roberts also declares that female empowerment is “replete with ancillary benefits beyond the environmental” and “unquestionably righteous.”

The history of humankind’s attempts to engineer population growth — no matter what terminology is employed — is fraught with unimaginable horrors, something that the environmentalist/population alarmists prefer to gloss over, or better yet, erase from humanity’s collective memory.

Yet that history remains our present and our future if the population engineers are left to have their way.

“The population controllers are often arrogant,” noted The Economist review of historian Matthew Connelly’s book, 'Fatal Misconception: The Struggle to Control World Population'. “In 1935, one representative told India's Council of State that population control was a necessity for the masses, adding that ‘it is not what they want, but what is good for them.’ The problem with the natives was that ‘they are born too much and they don't die enough,’ a public-health official in French Indochina stated in 1936.”

“All too easily arrogance slides into inhumanity,” the review continued. “Much of the evil done in the name of slowing population growth had its roots in an uneasy coalition between feminists, humanitarians and environmentalists, who wished to help the unwillingly fecund, and the racists, eugenicists and militarists who wished to see particular patterns of reproduction, regardless of the desires of those involved.”

“As the world population soared, the population controllers came to believe they were fighting a war, and there would be collateral damage. Millions of intra-uterine contraceptive devices were exported to poor countries although they were known to cause infections and sterility. ‘Perhaps the individual patient is expendable in the general scheme of things,’ said a participant at a conference on the devices organised in 1962 by the Population Council, a research institute founded by John D. Rockefeller, ‘particularly if the infection she acquires is sterilising but not lethal.’ In 1969 Robert McNamara, then president of the World Bank, said he was reluctant to finance health care ‘unless it was very strictly related to population control, because usually health facilities contributed to the decline of the death rate, and thereby to the population explosion.’”

Roberts suggests that what he calls the “female-empowerment package” carries the most potential to reduce greenhouse gases later this century — more so than other solutions. “Together they could prevent 120 gigatons of GHGs by 2050 — more than on- and offshore wind combined.”

Unspoken in Roberts’ modest proposal is the role abortion now plays as a variable in the population engineer’s population control equation. Also unmentioned is the rise of euthanasia in western culture. Euphemistically referred to as “death with dignity,” like abortion, it is simply a nicer term for the murder of the most vulnerable human beings among us.

Bill Gates, whose foundation champions better global health and living conditions, wants the world to do a “really great job” on “reproductive health services” in order to slow down carbon emissions and thereby protect the environment. This is the same euphemistic terminology for abortion now universally employed by Planned Parenthood and others who seek to camouflage the horrors of abortion.

According to the United Nations, global population is expected to grow from 7.5 billion in 2017 to 9.8 billion by 2050. The report predicts that over half of the world’s population growth will occur in India, Nigeria, the Democratic Republic of the Congo, Pakistan, Ethiopia, the United Republic of Tanzania, the United States of America, Uganda, and Indonesia.

Most of these are poor countries populated by people of color. And that’s where “female empowerment” efforts will be focused. Contraception and abortion will be promoted as a means of “mitigating some substantial percentage of that population growth” in order to create “better environmental conditions in 2050.”