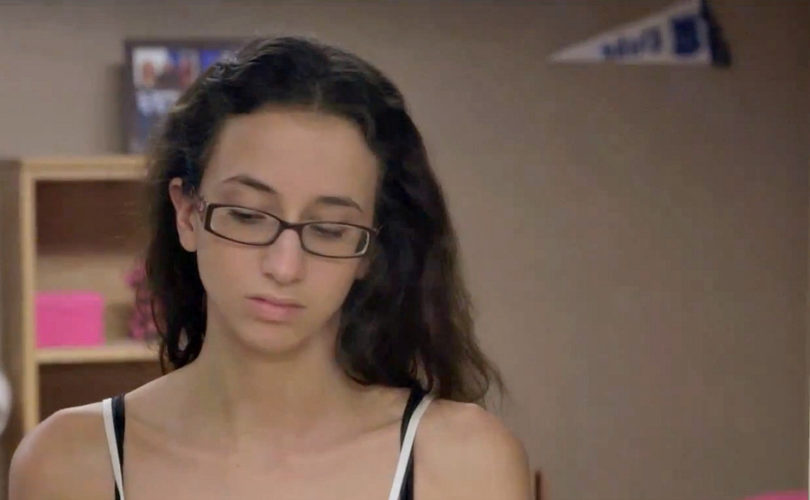 She looks young, younger than her 18 years. Sitting on a bed in a hotel room wearing baggy pajamas, glasses, and a far-away look, she looks at the camera and says bluntly, “A lot of s**t in my life has been ruined because of sex.”

It is then that you see her eyes. They look somehow old.

Is it any wonder that many fathers have a harder time connecting with their daughters, when they spend countless hours watching girls their daughters’ age being beaten up, raped, and subjected to every imaginable type of sexual degradation?

“The sex industry has a way of making you very cynical and very bitter,” a tired-looking Weeks tells an off-camera interviewer, “In a way I’ve started to become kind of a bit bitter and a bit cynical.”

Why? “It teaches you to be street smart and not to trust people…I’m so used to being on the lookout for scammers, people who are going to try pimp me out or traffic me. I think my experiences have aged me. I don’t have the mind of an eighteen-year-old. I have the emotional baggage of someone much, much older than me.”

Miriam Weeks, we see in her heart-breaking interviews, is just a hurting 18-year-old girl being used by an industry that takes girls like her, exploits their insecurities, promises them empowerment, and then subjects them to abuse and degradation until they can’t handle it any more. Then the carnivorous recruiters simply go out looking for fresh flesh to feed the baying cannibalistic mob, burning with insatiable lust and shouting their demands for new girls, new girls to degrade and discard.

A new day, a new human sacrifice at the altar of Eros.

And for all the world, she sounds as lost as our morally bankrupt culture.