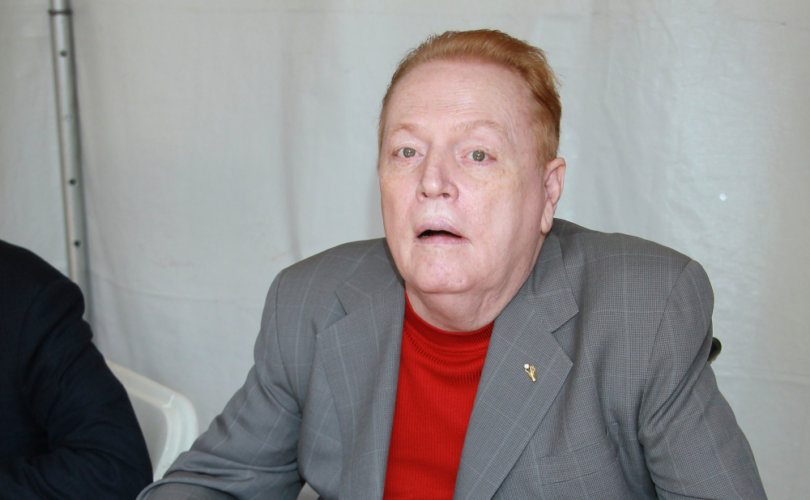 Flynt finally got rich the following year, when he purchased (for $18,000) paparazzi photographs of Jacqueline Kennedy Onassis sunbathing and published them in August of 1975, selling over a million copies within several days as he pandered to the worst instincts of the American public and took their money in exchange for smashing taboos and destroying privacy. Flynt was so flush he managed to buy a mansion with the money he made selling flesh. Whether the women who ended up in Hustler wanted Flynt to put their bodies on display for the paying public was of no consequence.

As with Hefner, Flynt’s personal life mirrored the sexual chaos he projected into the culture. He was married five times, was relentlessly and recklessly promiscuous, and claimed to have had his first sexual experience with an animal rather than a person. Nothing was too vile for Flynt, and he was proud of it all. Americans, he claimed, were just like him. “My competitors always masqueraded their pornography as art,” Flynt scornfully said to the Cincinnati Post. “We never had any pretensions about what we did … We have proved that barnyard humour has market appeal.” Those not already in the gutter, he believed, could be coaxed there.

In fact, Flynt furiously disowned his oldest daughter (of five) Tonya Flynt-Vega when she converted to Christianity and announced her opposition to pornography. His daughter eventually claimed in the 1998 book Hustled that her father had sexually abused her. Flynt claimed she was lying and that he’d passed a polygraph test confirming that fact. He himself converted briefly to evangelicalism in 1977 after an encounter with the evangelist Ruth Carter Stapleton (Jimmy Carter’s sister), before relapsing a year later and settling comfortably and conveniently on atheism.

Flynt’s most famous court battle resulted in the U.S. Supreme Court ruling in favor of his First Amendment right to publish a fake Hustler ad of Religious Right spokesman and televangelist Jerry Falwell describing an incestuous encounter between the pastor and his mother in an outhouse. Falwell won a libel suit against the pornographer in a lower court, but the Supreme Court decided in 1988 that the ad constituted parody and was thus protected speech. Flynt, already accustomed to fighting obscenity laws wherever he found them, styled himself a defender of the sort of speech most people were too decent to utter or publish.