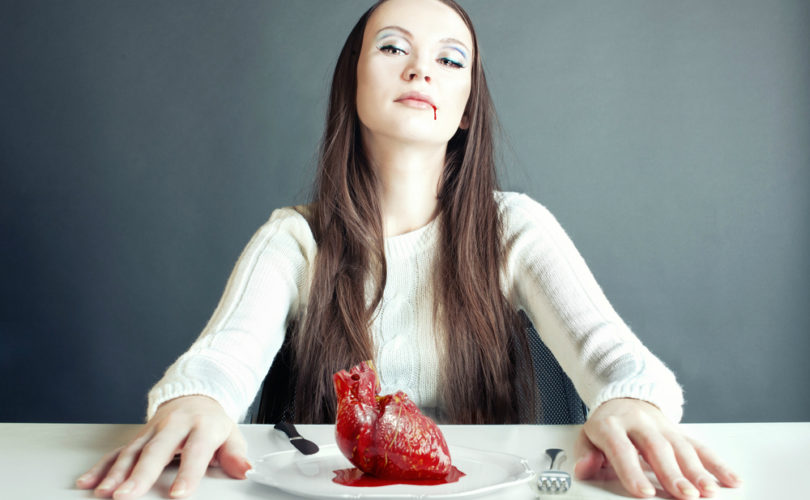 Pornography is someone sexually consuming another for one-sided pleasure. That person exists only to fulfill his pleasures, his fantasies, his satisfaction. Sexual cannibalism.

Think about it. Sex is supposed to be two people unashamedly giving themselves to one another in love. Sex is supposed to be all about the other person. That’s why, before our vocabulary started becoming far more crude and truncated, we used to call it “making love.” But watching pornography is the precise opposite of giving.

Pornography is someone sexually consuming another for one-sided pleasure. That person exists only to fulfill his pleasures, his fantasies, his satisfaction.

Rarely, of course. Because if we did, we’d stop watching.

Sexual cannibalism is our culture’s addiction to the flesh of others. But as we know, cannibalism isn’t healthy. And the evidence for this is everywhere.

For example, Covenant Eyes cited in their 2014 statistics a number of conclusions about the impact of pornography reached by the Journal of Adolescent Health:

We were about six months in when I found your stash and I picked it up smiling – “Boys will be boys” – expecting Penthouse Pets, Readers’ Wives etc but found women so mutilated by beach-ball, supersize-me, fake breasts that their eyes registered pain where their pouts pretended otherwise.

I felt it was mutilation. I wept. You shrugged off my arguments – “They get paid. It’s their choice” – and dismissed my arguments about exploitation as unchecked radical feminism…

When computers came, you got better at hiding it. You could no longer have an orgasm with me and blamed me and childbirth but I now know you had a case of the Prisoner’s Hand. Then your hints began. Could I wear more makeup? What about those white-tipped nails? Had I ever thought about breast implants? I hadn’t. Wouldn’t. …

There were words for what we did but it was never making love. … There was never intimacy in what we did and in the end I stopped wanting sex. Not that you wanted it with me anyway.

The letter goes on much longer, a heart-breaking autopsy of a marriage destroyed by pornography. Anyone who has done any anti-porn work has spoken to wives and girlfriends, many of them appalled and upset by what they have found their husbands or boyfriends looking at, and completely at a loss as to what their reaction should be.

We just need to realize that engaging pornography is essentially playing Russian roulette. As philosopher Roger Scruton said, “Those who become addicted to this 'risk-free' form of sex run a risk of another and greater kind. They risk the loss of love, in a world where only love brings happiness.”