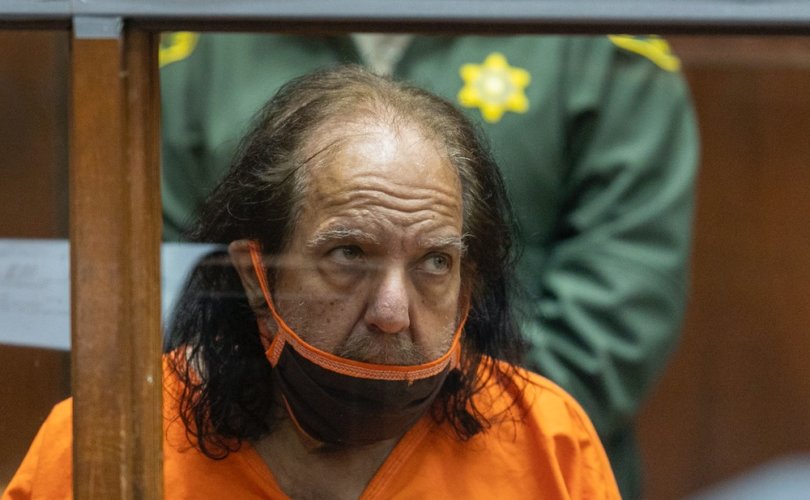 Ron Jeremy appears for arraignment on rape and sexual assault charges at Clara Shortridge Foltz Criminal Justice Center on June 26, 2020 in Los Angeles, California. The 67-year-old defendant could face up to 90 years to life in state prison if convicted as charged.Photo by David McNew / Getty Images

June 29, 2020 (LifeSiteNews) – In one of the least surprising stories of 2020, it turns out that an industry that makes its millions trafficking in rape, sexual torture, and the degradation of women has produced yet another sexual predator. The 67-year-old Ron Jeremy, one of the world’s most famous porn stars, has been formally charged with one count of forcible oral copulation and sexual battery, and three counts of forcible rape and forcible penetration with a foreign object. In total, he has been accused of sexually assaulting one woman and raping three others. Jeremy, whose real name is Ronald Jeremy Hyatt, pleaded not guilty to all crimes on June 27 in a Los Angeles courtroom.

The allegations against Jeremy are ugly. According to prosecutors, the aging porn star is a serial predator, having raped a 25-year-old woman at a home in West Hollywood in May 2014, and perpetrating two sexual assaults—one against a 46-year-old woman, and another against a 33-year-old woman—at a bar in the same area in 2017. He is also accused of raping a 30-year-old woman at the same West Hollywood bar in July of 2019. Jeremy claims through his attorney Stuart Goldfarb that he is “absolutely innocent of the charges,” and faces up to 90 years in prison if convicted. LA County sheriff’s detectives say they have been investigating allegations against Jeremy for two years.

Jeremy, who appeared in court last Friday in an orange jumpsuit, also took to Twitter to defend himself, claiming that “I am innocent of all charges. I can’t wait to prove my innocence in court! Thank you to everyone for all the support.” His next court hearing is scheduled for August 31, and a judge set his bail at $6.6 million. According to the district attorney’s office, the investigation into Ron Jeremy is ongoing, and one case, from 2016, has already been declined by prosecutor’s for lack of evidence.

“The sex industry has a way of making you very cynical and very bitter,” a tired-looking Weeks told one interviewer, “In a way I’ve started to become kind of a bit bitter and a bit cynical. It teaches you to be street smart and not to trust people…I’m so used to being on the lookout for scammers, people who are going to try [to] pimp me out or traffic me. I think my experiences have aged me. I don’t have the mind of an eighteen-year-old. I have the emotional baggage of someone much, much older than me.”

It is a fact that our culture consumes, for entertainment and sexual pleasure, pornographic images of women and girls being physically destroyed on-screen. Our young boys are growing up with a taste for rape and female pain, and this is twisting them in horrible ways. The allegations against Ron Jeremy are not surprising. It would only be surprising if there were not many, many more just like him—and scores of imitators in bedrooms across the continent, seeking to act out what they have been weaned on since puberty.