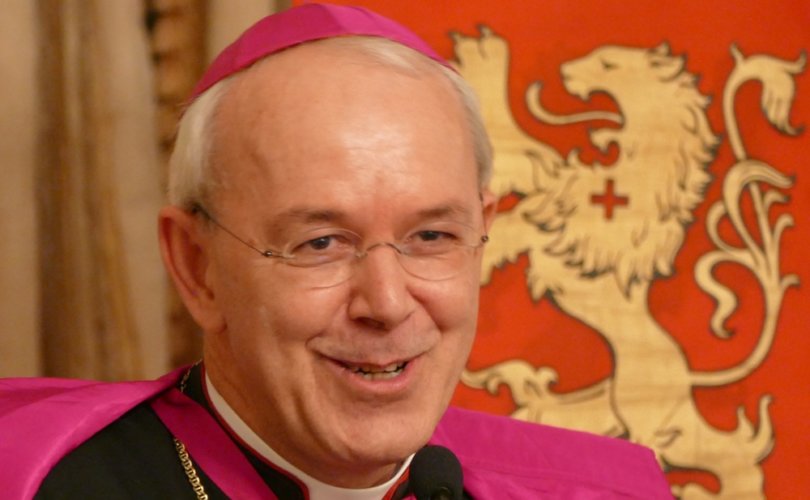 February 6, 2019 (LifeSiteNews) – Bishop Athanasius Schneider of Astana, Kazakhstan expressed his support for the campaign to Stop homosexual networks in the Catholic Church and compared its spirit with words of St. Catherine of Siena and St. Bridget of Sweden, both of whom have strongly admonished the clergy of their time to live chaste and holy lives.

Speaking of “the abominable situation of clerical sexual abuses of minors, seminarians, subordinate and vulnerable adults of an unprecedented extent,” Bishop Schneider said, in an exclusive statement to LifeSiteNews, that homosexual networks exist in the Church and that at the root of the abuse crisis lies “homosexual vice.”

The campaign, launched Jan. 16, asks the heads of the bishops' conferences worldwide — who will be meeting in Rome next month with Pope Francis — to take the necessary steps to stop homosexual networks in the Catholic Church, especially the networks that are connected with the clerical abuse crisis and that have recently come to light. The campaign and its corresponding petition was organized by the Swiss organization Pro Ecclesia and LifeSiteNews. The petition has of this writing been signed by over 9,500 people.

LifeSiteNews reported yesterday that Cardinal Gerhard Müller – the former Prefect of the Congregation for the Doctrine of the Faith – and Cardinal Walter Brandmüller, one of the dubia Cardinals, endorsed the campaign

Bishop Schneider noted how among the Church's hierarchy there is a “strange silence” concerning the homosexual factor of the problem. He said the Church will not resolve the problem without facing this very factor.

“If the upcoming Summit on Clerical Sexual Abuse at the Vatican will not address the issue of the moral relativism and the non-belief in the perennial validity of the Sixth Commandment of the Decalogue as the deepest cause of clerical sexual abuse, and if it will not highlight the predominant role of the homosexual behavior in the clerical sexual abuse cases, the Summit will give a highly irresponsible answer and will be doomed to failure from the start, manifesting thereby also a peculiar form of clericalism,” he said.

Bishop Schneider said that he supports the campaign to Stop homosexual networks in the Catholic Church – – and he states that “this appeal of the saint and Doctor of the Church must reach in the first place the ear of Our Holy Father Pope Francis and of all the participants of the Summit on Clerical Sexual Abuses.”

“Stop homosexual networks in the Catholic Church”: A support for a praiseworthy initiative of the lay faithful

The Church in our days is witnessing the abominable situation of clerical sexual abuse of minors, seminarians, subordinate and vulnerable adults of an unprecedented extent. These abuses were perpetrated by priests, bishops and even cardinals. Of course, the anti-Christian oligarchical media exploited on a world scale — demagogically and hypocritically — this shameful situation inside the Catholic Church, blowing it out of proportion.

Nonetheless, the Church must take this situation extremely seriously, since even a single case of sexual abuse of a child, of an adolescent or of a seminarian is too much, is an unspeakable cruelty, which cries to heaven. It is demonstrated by proven facts that the overwhelming majority of the cases of clerical sexual abuse were of a homosexual nature. The predominant cause of sexual abuses on the part of the clergy is consequently and undeniably homosexual or sodomite vice.

On the part of the authorities of the Holy See and of the majority of the hierarchy, there is surprisingly a strange silence about the predominant role, which homosexual vice plays in the clerical sexual abuse of minors, adolescents and seminarians. The upcoming Summit on Clerical Sexual Abuse in the Vatican has not only to address the abuse of children, but also of adolescents, seminarians, and vulnerable adults.

If the upcoming Summit on Clerical Sexual Abuse in the Vatican will not address the issue of the moral relativism and the non-belief in the perennial validity of the Sixth Commandment of the Decalogue as the deepest cause of clerical sexual abuse, and if it will not highlight the predominant role of homosexual behavior in the clerical sexual abuse cases, the Summit will give a highly irresponsible answer and will be doomed to failure from the start, manifesting thereby also a peculiar form of clericalism.

The spiritual health of the Church and particularly the high moral standard and the holy life of the clergy is a concern that affects all members of the Church, and especially the lay faithful. According to the ancient tradition of the Church, prior to a priest's ordination, the lay people were asked for their opinion regarding the worthiness of the candidate. The ordaining bishop gave the following reason: “Since the captain of a ship and its passengers alike have reason to feel safe or else in danger on a voyage, they ought to be of one mind in their common interests. Not without reason, then, have the fathers decreed that the people too should be consulted in the choice of those who are to be raised to the ministry of the altar.”

For some time now, there has been launched a very opportune petition initiative with the name “Stop homosexual networks in the Catholic Church.” The petition has broad support across the Catholic world and is co-sponsored by the organization “Pro Ecclesia” (Switzerland) and “LifeSifeNews.” So far the petition reached nearly 6,000 signatures.

The petition asked rightly the authorities of the Holy See to issue binding and efficacious norms in order to cleanse the Church from clerical homosexual networks. It is indispensable to protect the sacred state of the Catholic priesthood from persons with homosexual inclinations. Even if they promise to live chastely, their homosexual tendency constitutes in itself a personality and identity disorder, and each psychological disorder makes a candidate unsuitable for the priesthood.

One can be only glad and grateful for the meritorious initiative of the laity to stop homosexuality in the ranks of the clergy. Pope John Paul II repeatedly affirmed that, according to the Second Vatican Council, the hour of the laity truly has struck in our time and that the hierarchy has to accept with gratitude the advice and concerns of the lay faithful.

The present Petition initiative reflects and renews in our days to some extent the ardent appeals, which Saint Catherine of Siena and Saint Bridget of Sweden made for the moral renewal of the clergy in their time.

Saint Catherine of Siena wrote in a letter to Pope Gregory XI in 1376:

You are in charge of the garden of the holy Church. So first of all uproot from that garden the stinking weeds filled of impurity and avarice, and bloated with pride. I mean the evil pastors and administrators who poison and corrupt the garden. Use your authority, you who are in charge of us! Uproot these weeds and throw them out where they will have nothing to administer! Tell them to tend to administering themselves by a good holy life. Plant fragrant flowers in this garden for us, pastors and administrators who will be true servants of Jesus Christ crucified, who will seek only God’s honor and the salvation of souls, who will be fathers to the poor.

This appeal of the saint and Doctor of the Church must reach in the first place the ear of Our Holy Father Pope Francis and of all the participants of the Summit on Clerical Sexual Abuses.

Our Lord spoke to Saint Bridget of Sweden about the immoral clergy with these words:

These men [immoral clergy] hide their sin and malice in their heart as in the soil, and they become so rooted in evil that they do not even blush to go out in public and boast about their sin. Hence other people not only find it an occasion of sin but also get seriously wounded in their souls, thinking thus to themselves: 'If priests do this, it is all the more licit for us.' As it is, they resemble not only the fruit, but also the prickles in the sense that they disdain to be moved by correction and admonition; they think no one is wiser than they themselves and that they can do as they please. Therefore I swear by my divine and human natures, in the hearing of all the angels, that I shall break through the door they have shut on my will. My will shall be fulfilled and their will shall be annihilated and locked in endless punishment. Wherefore, as it was said of old, “I shall begin my judgment with my clergy and from my altar.” (Book of Revelations, Book I, Chap. 48)

God grant, that the voice of so many Catholics, who signed and will sign the Petition “Stop homosexual networks in the Catholic Church”, may not only be heard by the Supreme Pastor of the Church and by all participants of the Summit on Clerical Sexual Abuse, but that their opportune and necessary suggestions be possibly put into practice.

Most of the signatories of the Petition do not belong to those lay people who hold an office in the ecclesiastical bureaucracy, nor do they have decision power in the structures of the administration in the life of the Church. Their voices come really from the ecclesiastical periphery.

It would be a manifestation of true clericalism if these concerns of the little ones in the Church would not be taken at serious. Those faithful are authentic benefactors and lovers of the clergy, who not only pray for their shepherds but who also urgently demand from the authorities of the Church – as do the signatories of the Petition – to give them chaste, believing and zealous priests and bishops. And then our children, our adolescents, our seminarians and our vulnerable adults will live a more protected and more serene Christian life inside the Church.