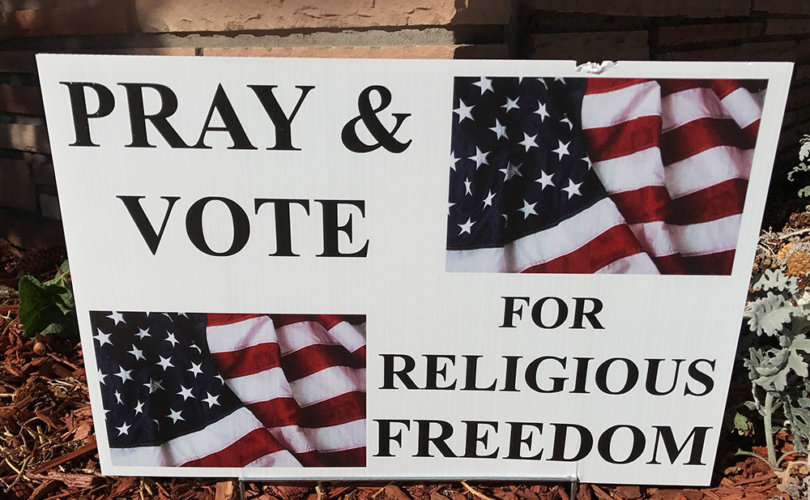 Knights of Columbus election sign at the front of St. Joseph's Church in Williams, ArizonaSteve Jalsevac/LifeSIte

November 7, 2016 (LifeSiteNews) —  Upon entering St. Joseph’s Church in Williams, Arizona on October 20, my wife Bonnie and I saw a large stack of signs being provided by the local Knights of Columbus. These were for all parishioners to post on their lawns or in their windows this election. The message on the signs, “Pray and vote for religious freedom,” seemed to sum up all the most important reasons to vote well this election.

Religious freedom (ultimately about authentic Judeo/Christian religious freedom in this now largely post-Christian nation) should be a deep concern for all believing American Christians, whether their main issues are abortion, marriage and the family, pornography, safe education for their children, parental rights, protection against terrorist acts within the United States, or many other faith-life impacting issues.

Some false religions, such as Sharia-imposing Islamism (a violent, totalitarian belief system) or similarly, Christian-hating Hindu extremism, cannot fall under U.S. religious freedom protections because of their total incompatibility with the Constitution and founding principles of  the United States.

The Founding Fathers of America warned of the dangers of loss of traditional U.S. religious freedoms as noted below in several quotes from the Founders.

People of authentic Christian faith in America are clearly under serious threat in the current cultural, political and legal climate.

The Supreme Court itself has stolen the undeserved right to be a law-making power unto itself. That alone is posing a far greater threat to all freedoms and constitutional rights of believers than the Founders would have imagined. Corruption within government, the courts, even the FBI, the CIA and other law enforcement agencies, and within most government related agencies, has become rampant far beyond what we could have dreamed of even a decade ago.

So, if anyone is inclined to not vote at all because of disgust over the voting options, I strongly suggest you vote regardless, making whatever is the better choice in the various offices open for election in your state and region – to defend threatened religious freedom, above all!

Without that freedom, America would descend into a dangerous, if not violent tyranny under which no one of faith will be able to freely exercise their religious beliefs in the public square – at work, at schools, in politics and most public settings.

And even then, there will be intense, growing pressures to remove your rights to teach your children your beliefs at home or for pastors to teach politically incorrect beliefs in their very own churches. We have already seen attempts to punish pastors for doing so. You can be certain that this will not only continue, but greatly increase in the near future if Americans do not make the right voting decisions on Tuesday.

Read below what the Founding Fathers had to say about the importance of religion to a free society.

They were explicit and adamant about this. No doubt these founders of America and its wonderful constitution would have been severely criticized and threatened were they to proclaim the same statements in today’s amoral and hostile to belief climate.

Statements by Founding Fathers of the Republic and others as published on various websites that list such statements:

John Adams in a speech to the military in 1798 warned his fellow countrymen stating, “We have no government armed with power capable of contending with human passions unbridled by morality and religion . . . Our Constitution was made only for a moral and religious people. It is wholly inadequate to the government of any other.” John Adams is a signer of the Declaration of Independence, the Bill of Rights and our second President.

George Washington, General of the Revolutionary Army, president of the Constitutional Convention, First President of the United States of America, Father of our nation,  ” Religion and morality are the essential pillars of civil society.”

“Let us with caution indulge the supposition that morality can be maintained without religion. Whatever may be conceded to the influence of refined education on minds of peculiar structure, reason and experience both forbid us to expect that national morality can prevail in exclusion of religious principle.”

“Of all the dispositions and habits which lead to political prosperity, religion and morality are the indispensable supports… In vain would that man claim the tribute of patriotism who should labor to subvert these great pillars of human happiness, these firmest props of the duties of men and citizens.” George Washington – Farewell Address Sept 17, 1796. The Will of the People: Readings in American Democracy (Chicago: Great Books Foundation, 2001), 38.

Benjamin Franklin, Signer of the Declaration of Independence, “[O]nly a virtuous people are capable of freedom. As nations become corrupt and vicious, they have more need of masters.”

Benjamin Rush, Signer of the Declaration of Independence said, “[T]he only foundation for a useful education in a republic is to be aid in religion. Without this there can be no virtue, and without virtue there can be no liberty, and liberty is the object and life of all republican governments.  Without religion, I believe that learning does real mischief to the morals and principles of mankind.”

Noah Webster, author of the first American Speller and the first Dictionary said,   “[T]he Christian religion, in its purity, is the basis, or rather the source of all genuine freedom in government. . . . and I am persuaded that no civil government of a republican form can exist and be durable in which the principles of that religion have not a controlling influence.”

“In my view, the Christian Religion is the most important and one of the first things in which all children, under a free government, ought to be instructed… no truth is more evident to my mind than that the Christian Religion must be the basis of any government intended to secure the rights and privileges of a free people.” Noah Webster. Cited in Harry A. Warfel (Ed.), Letters. To David McClure, October 25, 1836. New York: NY: Library Publishers. pp. 453-454.

“Whereas true religion and good morals are the only solid foundations of public liberty and happiness . . . it is hereby earnestly recommended to the several States to take the most effectual measures for the encouragement thereof.” Continental Congress, 1778

The importance of emphasizing religious freedom on Memorial Day

First they came for the florists: The threat to pastors’ religious freedom in Iowa (and everywhere)

A deceitful argument to crush religious freedom at hospitals