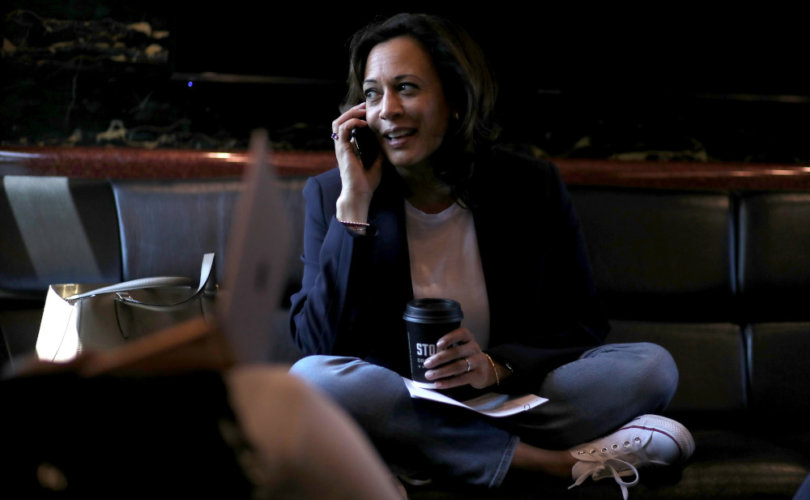 February 17, 2021 (LifeSiteNews) — That didn’t take long. Not four weeks into the Biden administration, and Kamala is already stepping in to perform one of the key functions of the president: dealing with foreign leaders.

Yesterday the White House published something it called a “Readout of Vice President Kamala Harris [sic] Call with President Emmanuel Macron of France.” The “readout” states:

Vice President Kamala Harris spoke today with President Emmanuel Macron of France, and expressed her commitment to strengthening bilateral ties between the United States and France and to revitalizing the transatlantic alliance. Vice President Harris and President Macron agreed on the need for close bilateral and multilateral cooperation to address COVID-19, climate change, and support democracy at home and around the world. They also discussed numerous regional challenges, including those in the Middle East and Africa, and the need to confront them together. The Vice President thanked President Macron for his leadership on the issue of gender equality and for France’s contribution to NASA’s Mars 2020 Perseverance rover.

Harris also recently spoke with Canadian Prime Minister Justin Trudeau on COVID, climate change, and diversity. (So far, however, neither has called the prime minister of Israel, Benjamin Netanyahu, our best ally in the Middle East.)

It is bizarre for a vice president to be making head of state calls to key U.S. allies and others just weeks into a new administration. Can you imagine Dick Cheney making such calls in the early weeks of the George Bush administration, or Joe Biden himself making POTUS counterpart calls for Barack Obama in early 2009?

Had this happened, the media would have quickly begun asking whether the president in question was up to the job.

In the case of Joe Biden, however, his abilities — such that they are — are not really in question. It’s been clear since the beginning of his campaign for president that he was in cognitive decline, and that, if elected, he would need a de facto “prime minister” to help carry out the day-to-day duties of the office.

The only question was: With the president’s role reduced to something along the lines of a figurehead, who was going to serve in this capacity.

Biden himself seemed to have acknowledged his limitations in 2020 when he called himself a “transition candidate,” a remark that seemed to suggest that he himself knows that he is not up to the job — at least for very long.

To my mind the two leading candidates for “prime minister” — Or should we say “acting president”? — are First Lady Jill Biden and Vice President Kamala Harris.

There is a precedent for a First Lady stepping in to run the show if the president is incapacitated. Woodrow Wilson's wife, Edith Wilson, ran the country for over a year after a stroke left him paralyzed on his left side. She decided who was allowed to see him and what documents he was shown. It is not for nothing that some have described her as “the first female President of the United States.”

“Dr. Jill,” as she styles herself, was often seen during the campaign serving as Joe’s minder, stepping in to guide him when he is confused or distracted. Now that he is in the Oval Office, she may also be quietly taking on some of his other duties.

Some have suggested that, based on handwriting analysis, Dr. Jill has been signing executive orders for her husband. If this is indeed happening, it would create a serious legal problem. If the president’s own signature is not on those EOs, they would be invalid.

One of the reasons that First Lady Edith Wilson was able to serve as “acting president” was that Wilson’s inner circle concealed the seriousness of his stroke. None of them were willing to certify, as the Constitution requires, his “inability to discharge the powers and duties of the said office.” This included Wilson’s Vice President Thomas Marshall, who never attempted to replace Wilson.

Should Joe Biden have a similar sudden health crisis, however, I do not think that Kamala will hesitate to invoke the 25th Amendment and seek to have Biden removed from office. She’s too ambitious, and — moreover — has the backing of former President Barack Obama.

For the moment the role that Kamala Harris plays in the administration is solely defined by the president. The Constitution is completely silent on the duties of the vice president. This is why Franklin Delano Roosevelt’s vice president, John Nance Garner, reportedly told Lyndon Johnson that “the Vice Presidency is not worth a pitcher of warm spit.” He had clashed with Roosevelt during his second term and was pushed aside.

I do not think that will be Kamala’s fate. One already sees signs — the phone calls, for example — of how eager she is to assume the duties of the president. There are also reports that she hopes to lead the U.S. delegation to the G7 summit in Cornwall, England, this June.

As Slow Joe slows down even further, Dr. Jill will probably quietly take over more of his Oval Office duties, while Kamala gradually becomes the public face of the administration, taking upon herself the onerous foreign trips, such as the upcoming trip to the U.K.

I have never thought that Joe would serve out his full first term, let alone a second. Now, after watching his performance over the past few weeks, I’m thinking he won’t even make it to the midterms.

America will then, in Kamala Harris, have a president so radical that she will make Barack Obama look like a moderate.