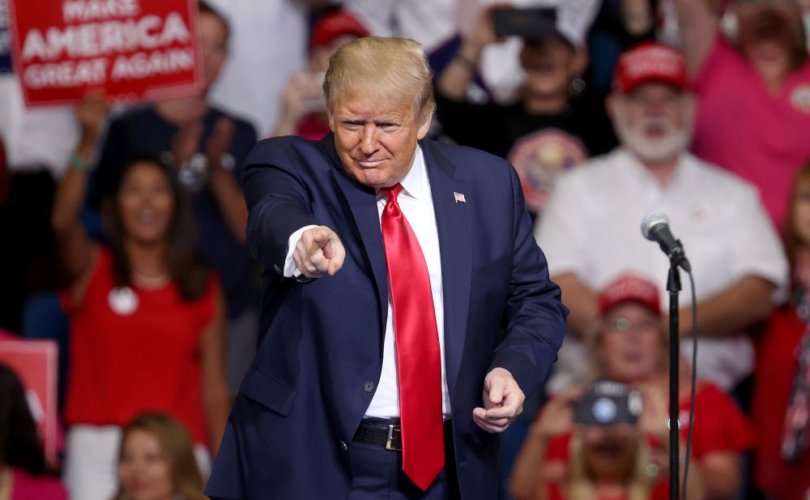 July 3, 2020 (LifeSiteNews) – On July 2, only hours after Dr. Taylor Marshall had given an interview to the U.S. cable network One America News (OAN) about the current crisis in America, President Donald Trump sent out a tweet highlighting the Catholic author’s warning. “Dr. Taylor Marshall, author. 'There Is A War On Christianity'. @OANN,” Trump tweeted. Marshall had pointed out that the current attacks on symbols and statues are finally not only about a presidential candidate, but about attacking our Christian civilization.

Dr. Taylor Marshall, author. “There Is A War On Christianity”. @OANN

With his tweet, the President of the United States appears to endorse Dr. Marshall's viewpoint that what is finally at stake in our current tulmults is a full undermining of the roots of American society, Christianity.

Yesterday, Marshall told Jack Posobiec of OAN that, “with these riots and these hate groups” it is not just about George Washington and other political figures, but “they are now attacking Christian symbols, signs, crosses, statues.” “We are really in a war over the heart of civilization,” the Thomist scholar and author of multiple books continued, and that civilization emerged “from Christianity.”

“The goodness that we have experienced,” Marshall went on to say, “in our nation emerged from a Christian culture. And these atheists, these socialists, these Marxists, they know that and they are attacking it.”

Here, we might remember, that it was the founder of Marxism, Karl Marx himself, who had once stated that “religion is the opium of the people,” and Communist countries have always suppressed Christianity.

Dr. Marshall described to Posobiec how only in recent days, there have been Catholic statues decapitated, the St. Louis statue in St. Louis assaulted, and two statues of St. Junipero Serra removed. Serra, however, “was a great champion for the rights of the Indigenous,” explained the book author. And at the time of St. Louis, in the 13th century, “there were no inter-continental slave trades.”

“They are taking the debates and controversies of our time and they are imputing them into these men who come before us so that they can erase Christian memory, erase Christian civilization,” the author added in the interview that now has been endorsed by President Trump. “They are actually going after what we believe in our hearts,” Marshall added.

This Catholic author, who runs his own Youtube channel, also endorsed President Trump for re-election when he told Posobiec that even though Trump is trailing in the polls, “I think people are realizing that 'I don't want to live in an America that is chaotic. I want the rule of law.’” Marshall holds that the U.S. can cherish what is good in its country and history, while purging evils, such as abortion, as it has done in the past in cases such as with slavery. “As a nation,” he explained, “we have been able to – often through blood –  repent and to change our ways.”

While he admits that “Trump is not perfect,” he adds that “none of us is perfect,” nor previous Presidents or even Catholic saints, and explains that “we can work together, not to burn everything that's America to the ground. We can simply fix what is wrong and cherish what has been good and wholesome in our history.”

In a comment to LifeSite on the president’s tweet, Marshall said that “people are realizing that we have shifted from a political battle to a spiritual battle.” He also explicitly drew a link to the recent presidential endorsement of an open letter by Archbishop Carlo Maria Viganò to President Trump:

“It’s no longer merely 'Left Vs Right' but people are realizing that it’s become 'Christ vs Satan' as foretold in Genesis 3:15. I did an interview with Jack Posobiec of OANN on this topic and I was pleased and honored that President Trump not only watched the interview but tweeted and quoted me on this matter. It shows that the spiritual struggle that Archbishop Viganò warned the President about is now becoming mainstream.”

Dr. Marshall, in his comments, also referred back to a book that he had written last year on the very same topic: “One year ago I wrote Infiltration: The Plot to Destroy the Church from Within [see here a chapter and book review as published by LifeSite] and I was called a conspiracy theorist back then. But now people realize that our society (Church and State) are truly infiltrated from within. This is not a conspiracy. It’s become our daily reality. We have seen the masks fall off both in the American demonstrations but also at the Amazon Synod and within the Vatican itself. President Trump is right to note 'There is a war against Christianity'. We must pray, do penance and seek Christ to win this war.”

On June 6, Archbishop Carlo Maria Viganò, the Italian prelate and former papal nuncio to the United States, had published an open letter to President Trump, in which he commented on the current crisis in the U.S. but also in the world: “In recent months we have been witnessing the formation of two opposing sides that I would call Biblical: the children of light and the children of darkness. The children of light constitute the most conspicuous part of humanity, while the children of darkness represent an absolute minority,” the prelate told President Trump. He identifies those dark forces as being part of the “deep state which you wisely oppose and which is fiercely waging war against you in these days – have decided to show their cards, so to speak, by now revealing their plans.”

Archbishop Viganò also added that “the riots in these days were provoked by those who, seeing that the virus is inevitably fading and that the social alarm of the pandemic is waning, necessarily have had to provoke civil disturbances.” He sees that the goal behind these disturbances is to avoid President Trump's re-election.

But the Italian prelate – similar to what Dr. Marshall is saying – also pointed to a Masonic background of much of today's disturbances when he wrote that “we learn once again that hidden behind these acts of vandalism and violence there are those who hope to profit from the dissolution of the social order so as to build a world without freedom: Solve et Coagula, as the Masonic adage teaches.”

The archbishop praised the President's acts in defense of the life of unborn babies and drew a parallel to the situation in the Catholic Church, in which he also sees a sort of a “deep state” among the leadership. Archbishop Viganò concluded his open letter with his assurance of his prayers: “Mr. President, my prayer is constantly turned to the beloved American nation, where I had the privilege and honor of being sent by Pope Benedict XVI as Apostolic Nuncio.”

Only a few days later, President Trump retweeted this very open letter and said that he was “honored” by this “incredible letter,” inviting “everyone, religious or not,” to read it.

Thus, Trump's endorsement of Dr. Marshall's interview is the second time in the recent past that the President is aligning himself with those voices among Catholics that, though in a minority, are determined to fight for the authentic and true Catholic Faith within the Church and for a Christian civilization at large, against the globalist and Marxist social engineers who are out to wage a “war against Christianity,” in the words of Dr. Marshall.