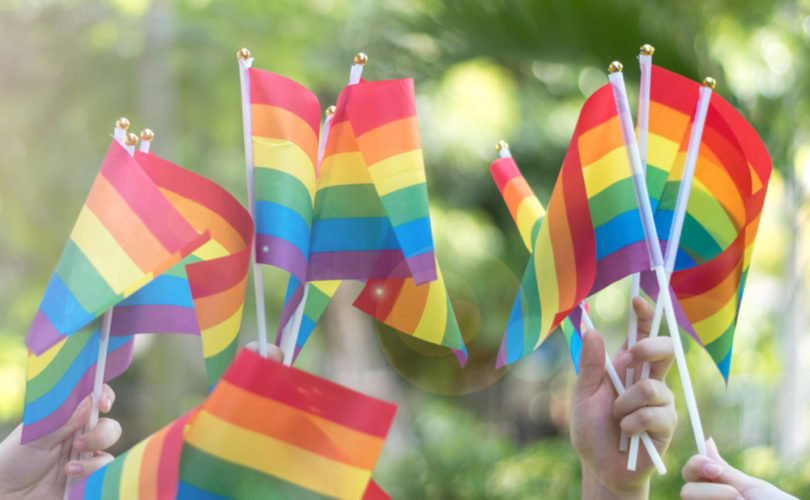 June 1, 2021 (LifeSiteNews) — In our post-revolutionary world, the entire month of June is now dedicated to massive parades, festivals, and corporate genuflection at the altar of an expanding panoply of sexual diversity. The identity game is booming, and everyone wants in on it. Of course, Pride parades are also fun for the whole family — even Canada’s state broadcaster says that children will see adult nudity at the festivities, but this is a good discussion opportunity (in case you wanted to discuss genitals and where people put them with your kids). Adult entertainment is now for kids.

As such, the animated series Blue’s Clues and You got in on the game with an animated knock-off of RuPaul’s Drag Race, featuring a drag queen singing to children about the many wonders of Pride Parades to the tune of “The Ants Go Marching.” Children are introduced to non-binary animals, transgender beavers, families with two moms, and other floats featuring various exotic aspects of the LGBT movement. This was aired on Nickelodeon, just in case you thought that children’s cartoons were free of indoctrination.

Parents will have to explain terms like “ace,” “queer,” “trans,” “bi,” and “pan,” and also a wide range of flags (because every identity has to have one, what with all the parades, etc.). What parent doesn’t want to explain bisexuality to their children? It’s 2021, and it’s also June.

In 2019 the Spectator journalist James Kirkup asked why so many people and organizations who had no knowledge of or policies regarding transgenderism at the beginning of the decade were now enthusiastically embracing “non-binary” identities and transition. He unearthed a document by Dentons, the world’s largest international law firm, and Thomson Reuters Foundation, a corporate tax law and media behemoth, entitled: “Only Adults? Good Practices in Legal Gender Recognition for Youth.” The November 2019 document was drafted for ILGYO — International Lesbian, Gay, Bisexual, Transgender, Queer and Intersex Youth & Student Organization — to assist in advancing the idea that it is possible for a child to “be transgender.” The Dentons document helps these transactivists persuade children to legally “change their gender” without adult approval.

These heavily politicized entities have the legal and media clout to make these changes. “Trust Law” is Thomson Reuters’ pro bono legal program, connecting the most successful law firms and corporate legal teams around the world with high-impact NGOs. The foundation works to drive systemic change in society. Reuters is fond of titles that drive the newly minted categories of “transgender people” and people with “gender identities.” And now they are selling us transgender children, with their legal guide and their news items.

Yesterday’s insanity is today’s orthodoxy — and if you’re the sort of pre-2014 Neanderthal who doesn’t think that kids should be exposed to this, the #LoveWins crowd is coming for you. Most recently, a P.E. teacher in Virginia was suspended after a speech described by Fox News as “explosive,” in which he stated the previously boring view that he would not “affirm that a biological boy can be a girl and vice versa.” The teacher, Tanner Cross, cited a recent “60 Minutes” special about “de-transitioners” featuring those who regretted their transition.

It should be obvious that saying boys cannot be girls and girls cannot be boys would not have been described as “explosive” fifteen historical minutes ago. In fact, around 2010 it would have been considered explosive to say the opposite. Society has undergone quite a transition in the meantime. Pride parades have their own month now, and they aren’t an act of cultural defiance — they are an expression of new norms, and you’re supposed to take the kids.