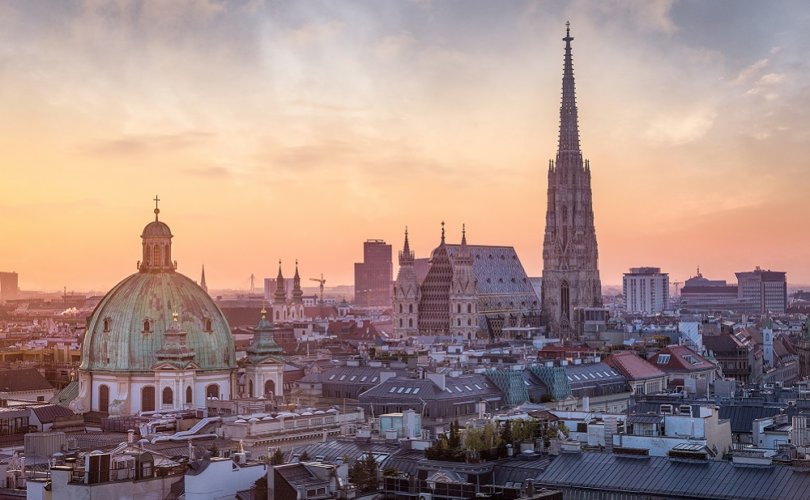 March 31, 2020 (LifeSiteNews) — Msgr. Michael Landau, the head of Caritas Austria, promoted and then distanced himself from a message from a night club in Vienna called U4 that recommends, among other things, making use of free access to pornography. He retweeted a favorable reproduction of the night club’s message by thanking the person who had posted it as well as the night club itself. The tweet was removed from Msgr. Landau’s Twitter feed shortly after an inquiry into the matter by LifeSiteNews.

On March 27, in an interview with Dr. Taylor Marshall, the Austrian Catholic activist Alexander Tschugguel brought to the public the news that, on that same day, the head of the Austrian branch of the Catholic Church’s Caritas organization had promoted the message of the Viennese night club.

The message of the night club U4 had been originally posted on the establishment’s Facebook page. The club explained that, due to the coronavirus crisis, it is closed and urges people to take the illness seriously. “Hence our most important message: stay at home, drink with your friends from home, via video chat one beer (or more), use the gratis YouPorn access, or read a book.” The post continues by saying there will come again “a time where people can fill their bodily fluids — or exchange them — in one of the coziest bars of Vienna.” U4 also thanks the Austrian Public Employment Service, the AMS, for helping its employees on the payroll.

The head of the AMS, Johannes Kopf, had posted the message of the night club, adding that the message “gives me special joy.”

On the same day, Msgr. Landau re-tweeted the message from Kopf and commented: “Thank you #AMS and thank you #U4,” thus publicly thanking that Viennese night club for its message, which includes the recommendation to make use of free access to internet pornography.

Dr. Michael Prüller, press speaker of Cardinal Christoph Schoenborn, responded to LifeSite’s inquiry into the matter, saying Msgr. Landau had originally “re-tweeted this tweet [by Johannes Kopf] because Caritas president Landau supports the efforts of the AMS. When he was made aware of the message contained in it, he deleted his tweet, in order to give no occasion for misunderstandings or misinterpretations.” As of this morning, four days after he had initially retweeted the scandalous tweet, Msgr. Landau still had the tweet preserved, even though individual Twitter users had already commented on it to point out the problematic content he was endorsing.

Caritas is an international organization of the Catholic Church that gives charitable relief in the fields of health and social matters and is organized in Austria on the diocesan level. It is supervised by the Austrian bishop, Benno Elbs. Msgr. Michael Landau is the president of Caritas Austria and of the Caritas branch in Vienna, the archdiocese of Cardinal Christoph Schönborn. Msgr. Landau is also a Catholic priest who was made a monsignor in 2006 under Pope Benedict XVI, and he is a member of the Cathedral Chapter of the Viennese St. Stephen’s Cathedral.

LifeSite also reached out to Alexander Tschugguel, who became internationally known for removing the scandalous Pachamama statues from a Catholic church in Rome during the October 6–27, 2019 Amazon Synod and throwing them into the river. He commented on this tweet by Msgr. Landau by saying that it is an instance of “unbelievable impudence that a prelate of the Church in this situation recommends that people violate the Sixth Commandment.” Tschugguel went on to say that it is “unbelievable” that this was done by “the head of Caritas — that is to say, of an organization whose aim it is to help the poor and the weak.”

“In this crisis,” Tschugguel concluded, “we have to give hope to people and to encourage them to come closer to God! I hope this is also the will of Msgr. Landau.”

Cardinal Schönborn bears responsibility for many scandalous events that have taken place in his St. Stephen’s Cathedral in the recent past, among them a concert in November of 2018 featuring a shirtless, pro-homosexual actor standing on the altar rail, loud rock and electronic music, and actors dressed as demons. Cardinal Schönborn, the Order of Malta, and Gery Keszler's LGBT Life Ball — who last year organized a charity event for HIV patients that drew much criticism — hosted this event, which also drew international umbrage.

Currently, during this season of Lent, there is displayed in St. Stephen’s Cathedral, in front of its high altar, an oversized purple sweater by the Austrian artist Erwin Wurm. Some of his works displayed on his own website depict men with their private parts showing in varying poses.