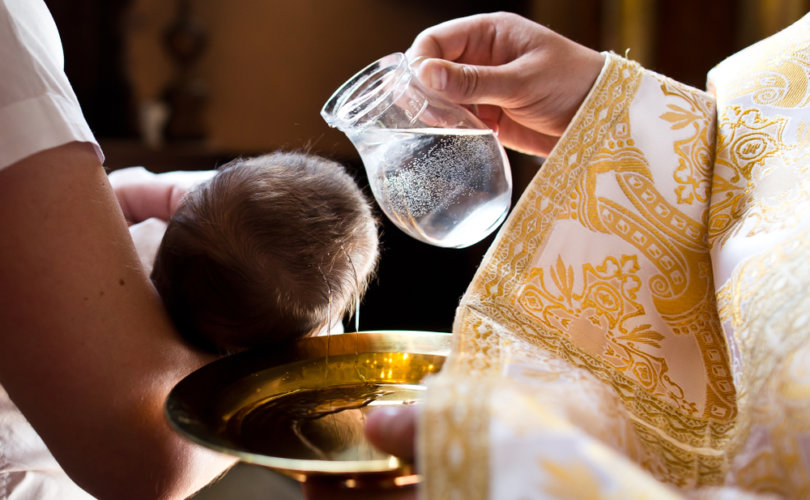 August 24, 2020 (LifeSiteNews) – The big story of the weekend came from the Archdiocese of Detroit. A certain Matthew Hood watched a video of his own baptism and realized that the officiant, a permanent deacon, had used an invalid formula: he had said ‘We baptize you’, not ‘I baptize you’. This was of special concern since Hood, now an adult, had been under the impression that he had been ordained a priest in 2017.

In some ways, the story is reassuring. It was a letter from the Congregation of the Doctrine of the Faith, under Pope Francis, insisting on the importance of these things, which set this chain of events into motion. The Archdiocese acted swiftly to have Hood properly baptized, confirmed, and ordained, and has done its best to reach other people baptized by the rogue deacon.

Two things remain worrying, however. One is that it is impossible to know how many other people are affected by invalid sacraments. The other is that many Catholic commentators seem not to care.

After all, they say, what difference could it possibly make? It isn’t a magic spell, it doesn’t need an exact set of words. God isn’t bound by the sacraments. And so on.

There are people who would be happy to accept this train of thought, but they are not Catholics. It is what you would expect of liberal Protestant thinking. The Catholic Church has a great apparatus of Sacramental theology and cares deeply about valid formulas and ritual actions because Catholics think it makes a difference. We think Christ’s death was efficacious, it actually reconciled us to God, and we think that we participate in this through things which, like the Cross, are specific and contingent: specific words and actions, chosen by God as the way this grace will be given to men.

Then again, God can still save people other than through water baptism. How and whether this happens is something which has not been revealed to the Church, and speculation on the subject, on the basis that God is terribly nice, is never going to get us the objective assurance that our sins, or those of our children, have been washed away, that the sacraments of Baptism and Confession give us.

If Fr Hood had died without ever having been baptized, it is reasonable to say that his desire for baptism would, at the point of death, have worked as a substitute for water baptism, in saving him from Original Sin. (This is what is denied by the followers of the late Fr Leonard Feeney.) However, it would remain true that he had gone through his entire life without the grace of baptism. Anyone who thinks that this is nothing, that it makes no difference, does not believe that Baptism gives grace.

What of those who come to confession to a person they take to be a priest who in fact is not one? Well, the Church teaches us that a perfect act of contrition, when we are sorry for our sins because they offend God, is sufficient to cleanse us from mortal sin. The process of examining one’s conscience, saying one’s sins to another, making an act of contrition and accepting and performing a penance will certainly be helpful to us in making such an act of perfect contrition. Sacramental absolution, however, cleanses us from our sins even if our sorrow for our sins is selfish, such as the fear of Hell. It is good to know that we can be forgiven without attaining a certain state of mind. How certain can we be that we attained it? And perhaps, for some people some of the time, a disinterested love of God is just not on the cards. They will not be forgiven without sacramental absolution.

At the moment of death, perhaps God does something special for those (including Protestants and pagans) who do not have this Sacrament. It seems a little odd to give us the Sacrament to help us in our salvation and then to say: actually it makes no difference to your salvation. But there is something else as well. Throughout their lives these hypothetical people saved on their death beds by a special and secret dispensation of divine providence, had been in a state of sin. They had never enjoyed the life of grace.

Part of the problem here among Catholic commentators on this story is that they are not concerned about the life of grace: the day to day of years and decades that a practicing Catholic can reasonably expect to be in friendship with God. They are too concerned with the conditions for salvation at the point of death to notice the issue of life. We should be concerned not only to die in a state of grace, but to live in one.