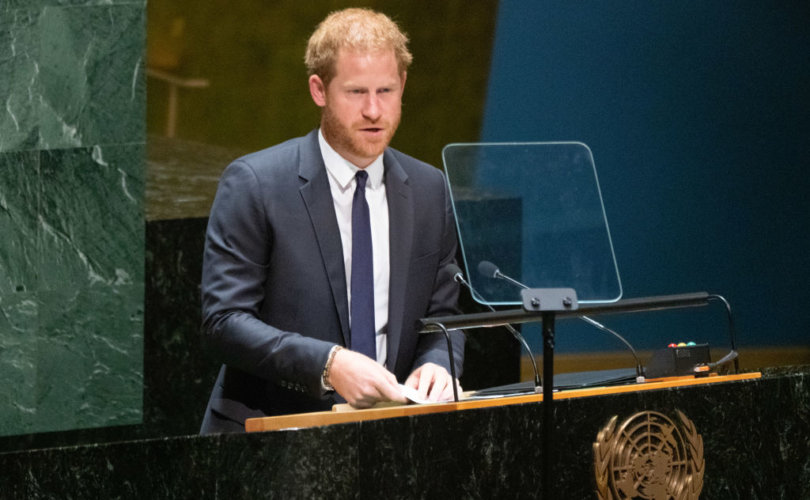 (LifeSiteNews) – The disgraced member of the Royal Family, Prince Harry, gave a speech to the United Nations in New York on Monday to commemorate the “Mandela Day.”

In true leftist form he rambled on about all the politically correct and politically opportunistic talking points. Democracy, climate change, injustice of all kinds, and “vulnerable” people who have been failed by their systems were discussed.

The person and legacy of Nelson Mandela was discussed, but only to buttress Harry’s talking points. Apparently, Harry looked to “Mandela’s writings for insight” before writing the speech, but curiously he did not relay what those writings actually said.

In addition, the audience was told to “heed the advice Mandela once gave his son, to never give up the battle even in the darkest hour.” And what, pray tell, is the “battle” and “darkest hour” now facing mankind according to the prince?

Well, of course, it is access to abortion and climate change.

— Article continues below Petition —
DEFEND Mothers and Babies Against Powerful CEOs Paying Female Employees to Abort!
Show Petition Text
5472 have signed the petition.
Let's get to 6000!
Thank you for signing this petition!
Add your signature:
Show Petition Text

About halfway through the speech, Prince Harry revealed the real heart of his intentions and how he planned to use the legacy of Mandela to promote his agenda.

Within about 40 seconds he jumped from “a pandemic that continues to ravage” the world, to “climate change wreaking havoc on our planet,” and finally the “rolling back of constitutional rights” in the United States that constitutes “a global assault on democracy.”

We all know what he is referring to when he mentions a constitutional event in America: he is talking about the happy overturning of Roe v. Wade which ended the illusion that destroying unborn children was somehow a constitutional right.

As an aside, sometimes I wonder who taught these globalists – if anyone did teach them – basic reasoning skills.

I understand that Harry is not a Yankee, but might the Loyalist Royalist not understand that a constitutional decision is not a democratic one? Is he under the illusion that somehow abortion was a matter decided by popular democratic vote in America?

At any rate, Harry’s clarion call against the assault on “democracy” which resulted in the protection of unborn human beings, is consistent with the population control mindset of the Royal Family.

This year was the commemoration of Queen Elizabeth II’ 70th year as Sovereign of the United Kingdom. I must admit, as a Canadian, I do hold a soft spot in my heart for the lady whose visage has adorned my money my whole life. However, it must also be admitted that Ol’ Betty might have been the most influential international leader in the post-WWII era that ushered in abortion-on-demand across the developed world.

In 1967, the Queen gave “royal assent” to the Abortion Act which okayed abortion in England up until 28 weeks gestation.

England has since killed upwards of 10 million unborn children.

It is striking to think that Elizabeth II would assent to such a thing, given the fact that Christian Evangelist Billy Graham had a close friendship with her, and it was said that she had a “traditional Christian faith.”

I don’t believe abortion legalization is a “traditional Christian” belief…

Now, I cannot pretend to know totality of Queen Elizabeth’s beliefs about life issues, however, her late husband was very clear about what he believed.

He was initiated into Freemasonry in 1952, honouring a promise made to the late King. It is said that he was not a dedicated mason as far as his participation was concerned, however, his worldview reflected what Freemasons have long believed.

Freemasonry offers a “naturalistic, universal religion” which is to say a world view that allows for a Divine Creator, but then sees the world through a more naturalist or materialist lens. This type of world view facilitates a type of natural pantheism where there is not a clear distinction between the value of a human person and the natural world.

In the 1960’s and 70’s Philip began show his Freemasonesque beliefs as he began to decry what he viewed as all sorts of environmental issues.

In 1972 he spoke of his concern that a “catastrophe” was on the horizon, citing “overpopulation, environmental pollution,” and more.

In 1988, Prince Philip seemed to take his pantheist leanings all the way, and joked (sort of) about reincarnating as a “deadly virus to contribute something to solving overpopulation.”

Some things skip a generation in families, but Prince Philip’s royal assent to the Freemasonic-friendly world view of population control only intensified with his son and then grandsons.

His son Prince Charles – the Prince of Wales – has been adamant that “the traditional attitude to the sacred nature of life” is to blame for overpopulation, and unless widespread abortion and birth control are not accepted, then the “poor planet” will not be able to “sustain us all.”

Charles’ eldest son Prince William has expressed his population control views. Notably in 2017 and 2021 he essentially blamed Africans for having too many kids, opining that by doing so they endangered the wildlife of the continent.

Commentators found this ironic considering that William and his wife have three children, which is more than Charles had with Diana, William’s mother.

Prince Harry, however, is under no such illusion that having more than two children is acceptable. He worries deeply about “Mother Nature,” having suggested that the alleged pandemic was a response to treating her poorly.

In 2019 while speaking to primatologist Jane Goodall, Harry said he would never have more than two children. “Two, maximum” he said enthusiastically. He added that a species as “evolved as we are all supposed to be” should not be so irresponsible with procreation.

Perhaps someone could clarify a matter for me, as perhaps I am naïve, but I cannot see how it would ever be a sign of “evolution” if a species were to restrict procreation.

In fact, if we were to look around and see animals aborting their young or using contraceptives, we might think they had gone mad, but certainly not that they had “evolved.”

Whatever the case may be, it seems as if Prince Harry is proof that the British Royal Family has evolved from a Christian monarchical institution into a masonic inspired shill for population control and environmental alarmism.