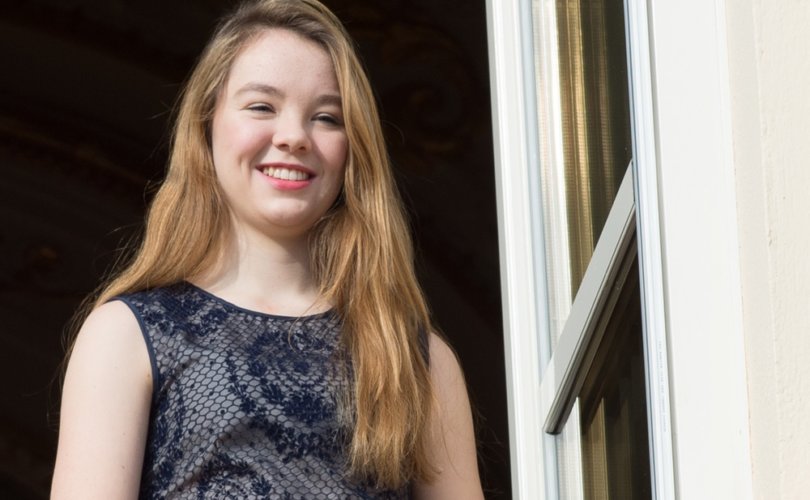 October 9, 2018 (LifeSiteNews) – Every now and then a closer or more distant blood relation of Britain’s Queen becomes a Catholic, and in doing so is removed from the “line of succession.” This is one of the last legal remnants of a system of anti-Catholic discrimination which once saw Catholics banned from living in London and becoming army officers, long after the bloody persecution ended. It means that however unlikely it might have been in any case, swimming the Tiber washes off the theoretical possibility that you could become King or Queen of the United Kingdom of Great Britain and Northern Ireland. Recently, it was the turn of Princess Alexandra of Hanover, who at 19 has adopted the Catholic religion of her mother.

Princess Alexandra is rather more closely related to the houses of Hanover and of Monaco than to Britain’s House of Windsor, and she probably gave this aspect of her conversion little thought. Somewhat closer to the British throne was Lord Nicholas Windsor, who was received into the Church in 2001; he gave an interview to LifeSiteNews in 2011.

Catholics are excluded from the line of succession by the Act of Settlement of 1701; Britain’s monarch is, after all, the Supreme Governor of the Church of England. Catholics are the Act’s targets, because it was passed in the aftermath of the English Revolution of 1688 (called by its supporters the “Glorious” Revolution), which saw the overthrow of the Catholic King James II. The greater friendliness of his brother and predecessor King Charles II to Catholicism and to the leading Catholic power of the time, France, led to the anti-Catholic moral panic of the fraudulent Titus Oates plot. When the Catholic James II had a son, and so looked set to establish a Catholic monarchy for the foreseeable future, a group of powerful Protestant nobles staged a coup.

Harking back to the religious policy of Elizabeth Tudor, the leaders of the new regime sought the support of non-Anglican Protestants, called ‘non-conformists’; active, if bloodless, persecution of Catholicism was part of the deal, as well as a way of excluding a certain James II and his Catholic heirs.

A Catholic monarch of a non-Catholic country was not inconceivable. Just before the English Revolution, Augustus II of Saxony became a Catholic in order to be King of Poland.

From then until the end of Saxon monarchy in 1918, the Protestant state had a Catholic king.

The experience of King James II – and, before him, of Mary Queen of Scots – as a Catholic monarch of an officially Protestant country was less happy.

While clearly not all is right with Britain while its heads of state are obliged to profess religious error, the principle that this job should be carried out by one with a particular faith is not wrong in itself. The idea that religious liberty obliges every position in society to be open to every possible religion leads to the absurdity of demanding that the Christian Union of Britain’s Exeter University open its membership, and even leadership positions, to those unwilling to make a simple profession of Christian faith.

A country is not a voluntary association like a student society, to be sure, but if it is appropriate to demand moral uprightness in candidates for high office, so it is natural and surely right in a Catholic country to expect the head of state to have the assistance of the Sacraments in maintaining that uprightness.

Furthermore, when the Protestants of a former time (and still, in some places), for complicated reasons regarded Catholicism as allied to despotism, we must take issue with the substance of their argument, and not make the absurd counter-claim that no worldview is any more closely aligned to despotism than any other.

There is a final consideration, connected with the nature of the value of the state. The modern, post-liberal secular state sees its task as not only restraining evils, but as promoting virtues. International bodies and states today proudly advertise their wish to “change attitudes,” sometimes by giving people a “nudge,” sometimes by direct intervention in school curricula, and sometimes by prohibiting “hate crimes.” This trend is more open in Britain than in the United States, but it is gaining ground everywhere.

While the content of these policies can be very problematic, the idea that the state is concerned with promoting the virtue of its members was taken for granted by centuries of political thought, including the ancient Greeks and Doctors of the Church like St. Thomas Aquinas. In a country that now actively promotes same-sex “marriage,” if there is some corner of the Constitution which holds that at least a nominal Christian profession is required of members of the Royal Family, that is something to be grateful for.