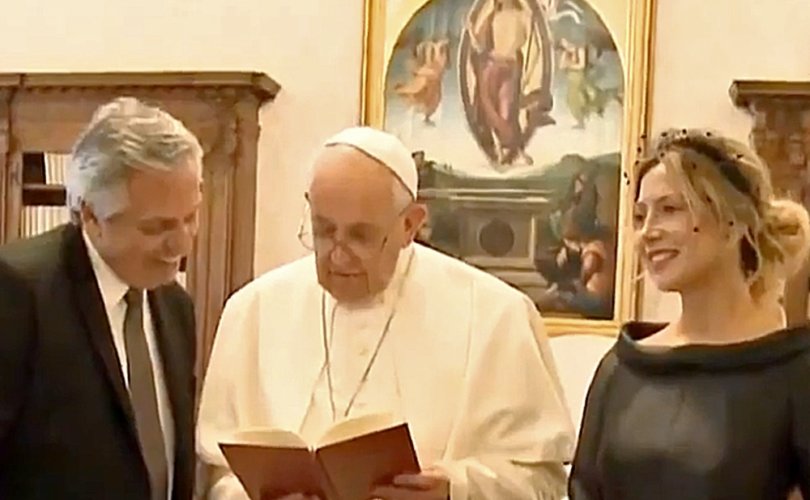 February 3, 2020 (LifeSiteNews) – Last Friday, January 31st, the divorced pro-abortion president of Argentina, Alberto Fernandez, and his concubine both received Holy Communion from Bishop Marcelo Sanchez Sorondo during a Mass in Saint Peter’s Basilica, shortly before meeting with another compatriot, Pope Francis, for a 44-minute talk during which the issue of abortion was avoided.

It was a blatant scandal: Communion was given to a self-affirmed adulterer who is on the point of pushing through legislation to make abortion legal, and who has made this one of his political priorities. Moreover, the sacrilege took place in the very heart of Christendom, with all the publicity associated with such a celebration during a State visit.

For those who still have doubts as to the tangible effects of the message conveyed by Amoris laetitia, the recent official visit of the new peronist Argentinean President Alberto Fernandez will have provided a striking clarification.

The audience with Pope Francis was long and cordial. The Apostolic Exhortation that opens the door to Holy Communion for divorced people engaged in a new “marital” union was given to the presidential couple by the Pope together with all the major documents signed by him during his pontificate, as is the custom. While the Pope insisted on his exhortation Exultate et gaudete about “the call to holiness in today’s world,” the gift of Amoris laetitia, which in a footnote suggests that divorced and “remarried” couples can receive the sacraments under certain circumstances, was particularly apt for the occasion.

Alberto Fernandez, 61, has been living with the Argentine actress Fabiola Yañez (38) since 2014. Since his election last December, she has moved in together with him at the Presidential Palace in Buenos Aires and plays the role of First Lady despite the informal character of their arrangement.

The Argentinean president married Marcela Luchetti in 1993 and divorced her in 2005, “leaving” a son. Estanislao Fernandez, 24, is now a well-known professional drag queen in Argentina.

From 2005 to 2014, Alberto Fernandez lived with Vilma Ibarra, who has three children of her own.

Ironically, Pope Francis preached that morning in Santa Marta about those Catholics who go to Mass on Sundays and call themselves Christians but who have “lost their awareness of sin.” He added that these Christians would need someone to tell them the truth, wishing that the Lord would send them a “prophet” who would “give them a little slap” when they let themselves slip “into this atmosphere where everything seems to be allowed.” Incidentally, he referred not to abortionists or adulterers, but to those who pay their servants or agricultural workers badly, according to a well-worn political pattern.

As if that wasn’t enough, the first reading of the day (in the Novus Ordo) of the mass attended by Alberto and Fabiola was the account of the murder of Uriah at the instigation of King David, who coveted his wife, Bathsheba.

Did the Vatican authorities “discern” about giving communion before inviting the Argentinean presidential couple to a mass specially celebrated for them? One wonders at the role played by what could be called the “Argentinian connection:” the incident included prominent Argentinians – the Pope, the President and his concubine, Sanchez Sorondo – and in the background, the letter of Pope Francis to the bishops of Greater Buenos Aires congratulating them on their interpretation of Amoris laetitia as opening the door to communion for habitual adulterers. “There is no other interpretation,” he wrote in September 2016.

A diplomatic imbroglio also occurred. Shortly after his meeting with Pope Francis, Alberto Fernandez sent his host an angry e-mail asking why the Vatican communiqué about the visit had announced that the subject of abortion had been raised during their meeting. He himself had just expressly stated that this had not been the case during the press conference given at the Argentinean embassy upon his return from the Vatican.

“I’ll have it corrected immediately,” the Pope replied a few minutes later, according to the Argentinean delegation. Fernandez, for his part, specified that the topic of abortion had only been discussed during his meeting with the Secretary of State, Cardinal Parolin, who “expressed his concern about this topic, (him) reminding him that the position of the Church is always the defense of life from the moment of conception,” according to the words of the Argentinean president to La Nación.

A new Vatican communiqué was issued, specifying that “not all the themes mentioned in the press release on the audience” with Fernandez “had been raised in all the conversations.”

The message is clear: Pope Francis did not address the subject. This seems to have been agreed upon even before the interview: according to Archbishop Hector Aguer, former archbishop of La Plata, Fernandez told the press on the eve of his meeting with Francis that the issue of abortion would not be raised. This would seem to suggest that there was an agreement on this point prior to the audience.

During his meeting with the press at the embassy, just back from Santa Marta and having taken Communion that same morning, Alberto Fernandez confirmed that he will not back down on the project of legalizing abortion in Argentina; the governmental project will be sent to Parliament on March 1st.

According to the Argentinian media, Fernandez mentioned St. Thomas Aquinas during his meeting with Parolin, telling the Cardinal that the Angelic Doctor was not against abortion “before animation” fetus. He also suggested that if the Catholic Church is losing faithful in Argentina to the evangelicals it is because the evangelicals are against abortion but allow “methods of pregnancy prevention.”

The president’s pro-abortion conviction led him, in a letter of 2018, to maintain that Saint Thomas Aquinas admitted the elimination of the embryo before it receives the definitive animation of the rational soul. Since he was obviously unaware of the work of the common Doctor of the Church, he could not realize that even if the latter accepted a progressive animation, and the successive animation with the vegetative, sensitive and rational souls, Thomas recognized the unity and continuity of this process, which is why he affirmed that it was immoral to interrupt it in any of its stages. He taught this in acceptance of the data of Aristotelian biology and the opinion of the scientists of his time, which would be outdated by later discoveries.

Our politicians are moral relativists, and they must think that the Pope is one too. Deputy Valdéz, former ambassador to the Holy See, had already declared that François “would understand.” On the eve of his meeting with the Pope, the president announced that the subject of abortion would not be raised during the conversation; the abominable crime – that is what the Second Vatican Council called abortion – is not a major problem compared to those of poverty, hunger and debt. Could it be so? We have no way of knowing, but can we not think that the Pope would be very saddened if his country of origin joined those who have already included in their legislation the permission to kill unborn children with impunity? And that being the case, did he remind Dr. Fernandez – who identified himself as a Catholic for the occasion – that he would incur a very grave responsibility before God by encouraging such a measure? It is said that the matter was discussed in the Secretariat of State. Will it have any effect? Because it is not the same thing. It is striking that the president has declared himself a son of the Church, that he attended Mass with his girlfriend, that he received Holy Communion from the hands of an Argentinean archbishop. It’s incredible, but between fellow countrymen of the same rank everything is possible after all! One more scandal, among many others…

The crime of abortion has been used by totalitarian regimes and imperialism to prevent population growth in poor countries; it is also a typical aspiration of the bourgeoisie. It’s too bad for the left-wing parties which, in their ideological blindness, do not understand that poor women, in general, do not want to abandon their little child, even if it was conceived against their will. They have a sense of life, of the natural order, that is despised by the comfortable societies of a dehumanized West. Among many Argentine politicians, ideological prejudices have taken precedence over thinking that discovers the truth of being; they ignore or repudiate the metaphysical concept of nature, and therefore cannot grasp the reality that it designates, and the natural order that flows from it.