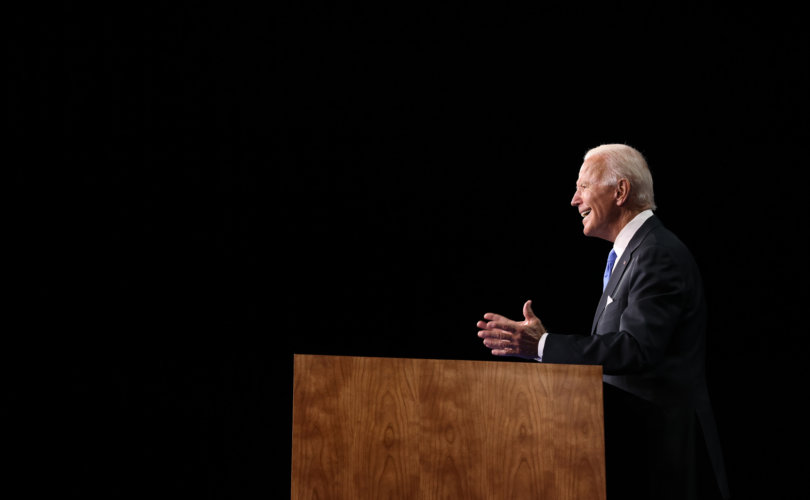 August 21, 2020 (LifeSiteNews) — During his acceptance speech at the widely-criticized Democratic National Convention last night, 77-year-old Joe Biden promised that if he was elected the next president of the United States he’d be “an ally of the light, not the darkness.”

“I will draw on the best of us, not the worst,” the former Vice President said. “I’ll be an ally of the light, not the darkness…make no mistake, united we can and will overcome this season of darkness in America.”

The convention drove the point home all week that Biden is the candidate who will restore America to a more wholesome period. Michelle Obama called him a “profoundly decent” human being in her remarks while video montages shared stories about Biden’s Catholic upbringing and his friendship with Republican lawmakers like John McCain.

There’s only one major problem here: The past four years haven’t been a period of darkness…and Joe Biden is anything but a light-bearer.

Not only is Biden and his running mate Kamala Harris puppets for the open borders, Wall Street, Chamber of Commerce crowd, he’s an angel of death whose presidency would hasten the demise of the United States. Think I’m being too extreme? Here’s just a few of the many anti-Christian policies Joe Biden has promised to support if elected:

And that’s just the beginning. During his 40+ years in elected office, Biden’s voted for bills that have undermined middle-class families and communities. He supported NAFTA, helped make China an economic superpower, and has waged an imperialist foreign policy that has put young American boys and girls into harm's way. He’ll continue these disastrous policies should he win the presidency. Moreover, Biden has failed to condemn Antifa and the violent mobs destroying American cities these last few months. How is he in any way “an ally of the light”?

Scripture tells us there are four sins that cry to heaven for vengeance, two of which are homosexual acts and murder. It also says “righteousness exalts a nation but sin makes a nation miserable” (Proverbs 14:34.) The pro-gay, pro-abortion, anti-family policies promoted by Joe Biden would not only lead the United States away from God, but would bring down His wrath upon it. “Woe to you that call evil good, and good evil: that put darkness for light, and light for darkness,” Isaiah 5:20 says.

Contrast the anti-Christian country a Biden administration would usher in with the following policies and actions taken by President Trump over these last “dark” four years:

While there are many more things President Trump (who, admittedly, has not been perfect on social issues) needs to do, he’s infinitely more “an ally of the light” than Joe Biden. Americans need to reject this false Democratic narrative.