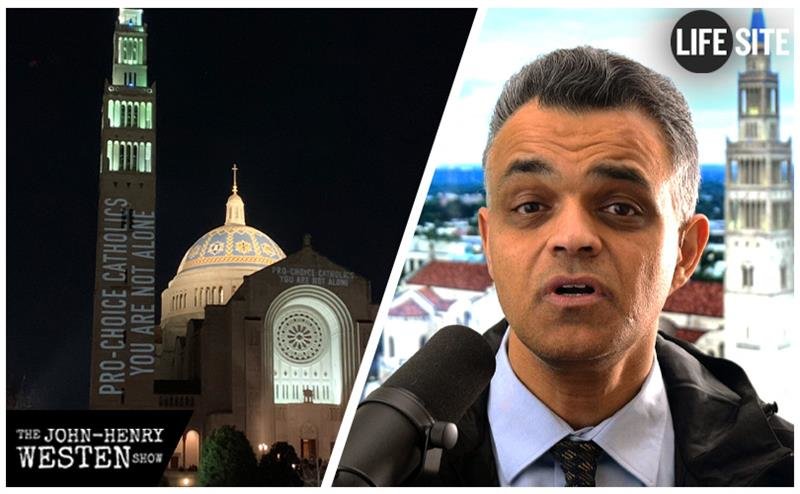 (LifeSiteNews) — Today is the March for Life, and thousands of pro-lifers are in Washington D.C. to witness to the sanctity of life and the dignity of every unborn baby in the womb.

The March for Life is a great experience, full of joyful pro-lifers encouraging one another and showing the world what it means to be pro-life.

Nonetheless, it can be something of an uncertain experience. We all know that the enemies of the unborn are unpredictable and can be violent, even toward people on a peaceful march like this.

So it’s not surprising that Catholic marchers met in the Basilica of the National Shrine of the Immaculate Conception last night for a prayer vigil in preparation for the following day.

But while they were inside, praying before the Blessed Sacrament

for the unborn babies,

for the scared mothers and fathers who feel that they have no choice, or who are crippled by physical or mental wounds caused by abortions,

for those politicians who are standing up for all these victims,

and to strengthen the weak knees of those politicians who know they should, but are too afraid to do so —

while they were doing all this, what do you think the cynical pro-abortion group Catholics for Choice were doing?

They were projecting giant pro-abortion messages onto the Basilica itself. Take a look a what they were saying:

1 in 4 abortion patients are Catholic.

Pro-choice Catholics, you are not alone.

Catholics 4 Choice, imposed on a Cross.

Ashley Wilson, the director of communications and strategy for this sick group Catholics for Choice, explained their actions on Twitter:

I am tired of feeling shame and stigma for being a pro-choice Catholic. And I’m not here for people to judge my own personal relationship with God.

We want pro-choice Catholics to know: this is your church too.

Tired of feeling shame? Judging your personal relationship with God? What are you talking about?

Ashley, it’s not about you. We aren’t here to make you feel shame or judge you at all. We are not witnessing against individuals, but for the unborn babies who are innocents in the womb.

Let’s remember that these weakest and most vulnerable members of the human family are treated with total disregard: killed in a variety of different ways by a medical-industrial complex, and their organs or cells harvested for this or that sick experiments. Murder is, according to the Bible, one of the four sins that cries to heaven for God to avenge it. And we are here asking God to forgive the murderers, to end the killing, and to witness that at least some people are not okay with murder.

You say you feel ashamed, and you feel that we are judging your relationship with God.

Ashley, that is your conscience speaking. That voice of your conscience is a gift from God calling you to the truth, to life, to salvation. In rejecting it and trying to externalize it and foist blame for it on pro-lifers is not your answer and won’t bring you peace. That can only come from God and embracing Him and His truth.

I don’t want to compare the Church to other religions, nor compare the pretty basic natural law of not killing the innocent with religious dietary requirements. But what these people have done is on a similar level to projecting “Jews for pork” or “Muslims for beer” onto their respective places of worship. Putting aside all questions of religious truth, just basic decency doesn’t do that. As Ed Condon of Pillar Catholic commented on this:

Political campaign group uses religious building to mock the church and the beliefs of the people keeping vigil inside. Classy.

But when you’re advocating killing unborn babies, I suppose all class and basic decency have already long gone.

And as for this idea, “Pro-choice Catholics, it’s your Church too.” No, dear friends, it’s Christ’s Church. He said, “On this rock I will build MY Church.” When Saul was persecuting the Christians, Christ said, “Saul, why are you persecuting ME?” It’s not your Church at all, it’s not my Church, it’s not pro-lifers’ Church either. It’s Christ’s Church and if we want to be members of it, as the theology goes, we have to externally profess the Catholic faith — and those who publicly fail to do so sever themselves from that Church. That’s called heresy. Pius XII taught that clearly in his encyclical Mystici Corporis Christi, and it was in every child’s catechism. Go look it up.

We have seen reports that a man came out of the Cathedral and started remonstrating with these people. He told them that there was no such thing as a pro-choice Catholic and was reportedly describing Hell to these people in detail. What’s perfectly clear is that these people are not Catholics in any way except their claim to the name. So good for that man in coming out and asking in righteous anger, “Honestly, are there any Catholics here?”

Indeed, would any Catholic vandaliZe the Basilica of the Immaculate Conception in this way? Sure, it’s not spray paint, and no cleaning is required. But it’s graffiti all the same — and as it’s of a Church, it’s a sacrilege.

St. Thomas Aquinas says sacrilege is an irreverence done to sacred things, and that as such it is an injury done to God Himself. I’d say that’s a pretty good description of what’s happened here. As our friend Bishop Joseph Strickland of Tyler said:

If this is real it is an atrocity. Support of murder projected on the Shrine of the Immaculate Conception??? I pray that it is a fake photo photoshopped for evil purposes. If it is real it is horrible & even faking it is evil.

But let’s also remember: We must pray for the conversion of these misguided people who may be more or less conscious of the evil they are supporting. They aren’t the “great architects” of this wickedness: behind it all is the devil, Satan, the enemy of the human race.

But he isn’t just the enemy of the human race, he is the enemy of the Blessed Virgin Mary, she who crushes his head. How, according to the Church, does she do this most particularly? Through her Immaculate Conception: She was redeemed, by Christ, in advance in a sense, by being preserved from original sin, and so the devil has never had any part in her. And he hates her for it, with an angelic passion.

So, friends, if you ever find yourselves thinking that it might be a good idea to desecrate a Basilica named in honor of this Immaculate Conception by projecting pro-murder and anti-Catholic messages onto it, maybe just pause, and wonder where that idea came from — or rather, from whom. It didn’t come from a good angel.