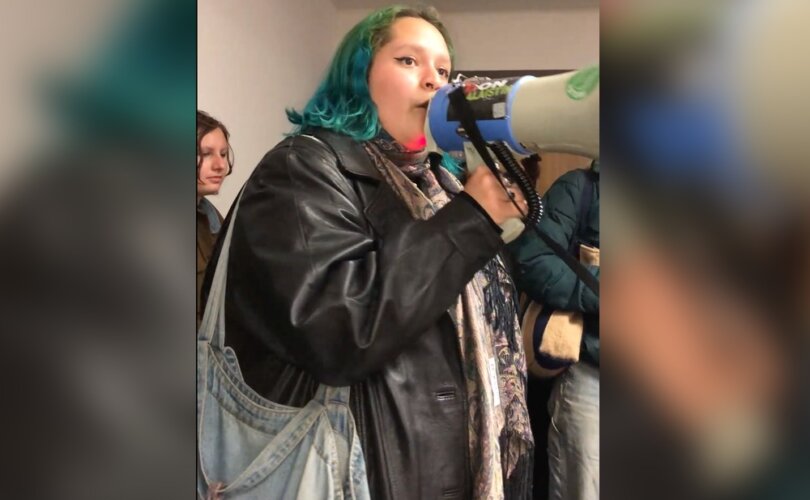 EDINBURGH (LifeSiteNews) – Weirdly, there was no acknowledgement that we were standing on the stolen land of the Votadini people and their Scottish descendants.

This popped into my mind shortly after an American (or, I fear, Canadian) woman burst into a classroom at Edinburgh University to prevent another American from giving a lecture on coerced abortion. The lecturer had been invited by the Scottish president of the Life Society, and the American (or Canadian)-led group wasn’t so keen on what this young Scot had to say, either. There were dozens of hostile pro-abortion people in that room, and although they outnumbered pro-lifers 3:1, Scots were even more vastly outnumbered by non-Scots, including Canadian me.

The variety of English, American, and otherwise not-Scottish accents reminded me that leftists nowadays preface their speeches by paying tribute to the people whose land they apparently believe themselves to be on. Had the young demonstrators stuck to that script, they might have acknowledged that they were standing in the city of the Scottish Enlightenment, a movement for which freedom of speech was a key value. They might also have mentioned David Hume, the brilliant Scottish philosopher after whom the building was named until he was cancelled in 2020 for confessing to unenlightened thoughts about Africans in 1753. That might have been too much to ask, however. When one young man mentioned classical liberalism during the “discussion” that replaced the deplatformed lecture, the mob tittered.

I don’t want to give the impression that this was an overly diverse crowd. For example, there were only two people of color in the room: a South Asian woman whose fury at pro-lifers bulged from her eyes and an African pro-lifer at whom the protestors initially laughed. But the evening’s last speech/verbal abuse came from a young European who expressed his anger that “our” university would allow someone from Scotland’s Society for the Protection of Unborn Children to speak. He was very, very angry at “our” university, and I was struck by his sense of ownership over a 439-year-old Scottish institution British taxes support.

Ownership. Entitlement. And colonialism, too. Americans especially seem to be punching down and above their weight in Scotland. The (white) woman who led the campaign for Edinburgh University to cancel its graduate David Hume hails from North Carolina. American students, like everyone else, certainly have the right to make their voices heard as guests in Scotland, but it does seem unseemly for them to hold the bullhorn. Surely it would have been much more in keeping with leftist pieties on Monday night for the Glasgow Academy-educated Woman’s Liberation Officer present to have led the charge. Oh, wait. Glasgow Academy is a prestigious private school with annual tuition fees of £5,700 ($6,425 US). I guess not then.

These thoughts began to gestate in my mind during what was essentially an occupation. In hindsight, the custodian who turned up to ask the mob to settle down was probably keeping an ear on the situation, but at the time I was frightened by the obvious hatred of the angriest protestors for the pro-life presenter and her organization. It seemed to me that when the tension in the room relaxed – when, for example, one of the protestors sought to find some common ground with the pro-life position (discrimination against the disabled, restrictions after 24 weeks gestation) – another protestor ginned up the anger again. I mentioned this in my report yesterday, and I’ll mention it again: the small group of Life Society members, their guest speaker, and their friends were surrounded and outnumbered by protestors – a few were quite large – and the latter effectively blocked the only exit.

The biggest irony, bigger than the irony of Americans (and possibly a Canadian, as well as the other non-Scots) cancelling free speech in Scotland, was that the gang bullied SPUC’s Margaret Akers into giving up her talk about women in Scotland who are bullied into having an abortion. They seemed committed to current leftist standards of politeness – for example, they (sometimes) clicked their fingers instead of clapping to show agreement when someone was speaking – but also supremely unconcerned that they had rendered what was supposed to be a “safe space” for free speech decidedly unsafe for those who believe in it.

Brainwashed, blue-haired leftist interrupts a classroom of pro-lifers… then declines conversation while wielding a bullhorn. pic.twitter.com/4rEjqO0t8j

The saddest irony, of course, was the testimony of the tired-looking American woman who moved uninvited to the front of the room to talk (through the bullhorn) about her positive experiences in procuring an abortion two weeks earlier and the warm approval she had found among the gathered activists for doing so. Despite these joys, all had not been well. Early in her speech, she said “I had to have an abortion because I was coerced into not using contraceptives” (my emphasis). There it was in auxiliary verb “had”: the possibility that she had not had a choice, that bullying had overcome her moral agency, that she had had to have an abortion, that she had been coerced.

Of course, she probably meant that she “had” to have an abortion because having sex had led to conception and, in her view, having a baby is one of the worst things that can happen to a young woman, even in 2022, even with so much support from loving leftist friends. That certainly appeared to be the attitude of the pro-abortion majority in the room. And from their surprisingly modest reluctance to utter the words “sexual intercourse,” they gave the impression they think pregnancy is a hideous accident falling from the sky. Its origins inexplicable, it unfairly targets people with uteruses and is usually fatal. One protestor even likened pregnancy to cancer. She formulated an argument that showing posters of mutilated fetuses to discourage abortion was like highlighting the ravages of chemotherapy to discourage cancer treatment.

David Hume must have turned in his grave. Perhaps, wherever his soul is now, Hume is glad an American got his name off the building.