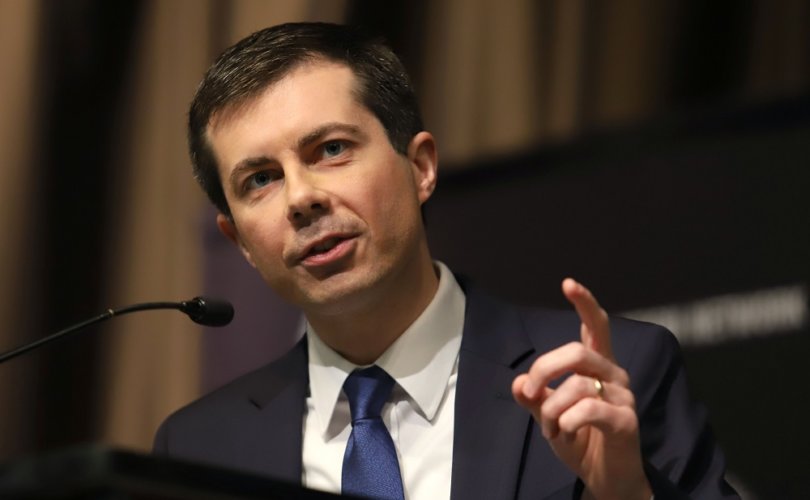 April 8, 2019 (LifeSiteNews) — If ever there was a glaring instance of the pot calling the kettle black it was when South Bend Mayor Pete Buttigieg, a professing Christian and practicing homosexual, called President Trump a hypocritical Christian. Seriously?

To be clear, I have no problem with someone questioning whether President Trump is a true Christian. An evangelical friend of mine who has met with Trump on several occasions recently told me that he does not believe the president has had a true conversion experience but that he does truly fear God. Other friends have told me they believe that Trump loves Jesus but is a mere babe when it comes to the Christian faith.

Ultimately, only God knows the state of Donald Trump's soul.

But I fully understand why people question his Christian faith, based on his past life (before becoming president) and his current behavior (as president).

One thing, though, is sure: Donald Trump does not claim to be a model Christian, nor should we look to him for an example of how to live out our faith.

What is utterly absurd, though, is for a man who professes to be a serious Christian, yet is pro-abortion and “married” to his same-sex partner, to call out Trump's alleged hypocrisy.

According to USA Today, which wholeheartedly supported Buttigieg's position without a hint of awareness of the irony of it all, “Mayor Pete” stands out “as a devoted Christian.”

According to Buttigieg, “The left is rightly committed to a separation of church and state … but we need to not be afraid to invoke arguments that are convincing on why Christian faith is going to point you in a progressive direction.”

As for Trump, he said, “I'm reluctant to comment on another person's faith, but I would say it is hard to look at this president's actions and believe that they're the actions of somebody who believes in God. I just don't understand how you can be as worshipful of your own self as he is and be prepared to humble yourself before God. I've never seen him humble himself before anyone. And the exaltation of yourself, especially a self that's about wealth and power, could not be more at odds with at least my understanding of the teachings of the Christian faith.”

Is Buttigieg guilty of judging President Trump in a way that violates the Lord's mandate to not judge? (See Matthew 7:1-5; for an explanation of what Jesus actually meant, see here.) That is certainly possible, since he is judging largely by secondhand information and outward appearance.

First, Buttigieg says that one of his favorite verses in the Bible is where Jesus says, “Whatever you did for one of the least of these … you did for me” (see Matt. 25:31–46). Yet Buttigieg claims that when it comes to abortion, “Jesus never mentioned the issue.”

So, for Buttigieg, whose platform is thoroughly to the left, innocent, helpless babies in the womb are not included in the “least of these,” yet illegal immigrants are.

In fact, not only is he “openly pro-choice,” but when it comes to late-term abortion, he will make no official comment, saying only this: “when a woman is in that situation … extremely difficult, painful, often medically serious situations where life or health of the mother is at stake, involvement of a male government official like me is not helpful.”

So much for caring for “the least of these.”

Yet when Trump and Pence take strong pro-life stands, Buttigieg deems this hypocritical. (He also criticizes Pence as a “cheerleader of the porn-star presidency.” Not too judgmental, eh?)

Second, as an out-and-proud gay man, Buttigieg must discard the entire testimony of Scripture, since every single reference to homosexual practice in the Bible is condemnatory, without a single positive, homosex-affirming statement of any kind. (Let me be quick to add, however, that grace, mercy, and forgiveness are offered to all alike through the cross.)

It would be one thing if Buttigieg said, “I struggle with same-sex attractions, but as a committed Christian, I do not affirm these desires, act on them, or celebrate them.” That would be highly commendable.

Instead, he wants everyone to see that “our marriages are just as good as theirs,” even if that means rewriting the Bible and throwing out almost 2,000 years of virtually unanimous teaching on the subject through all branches of Christianity. After all, love wins, and love is love, right?

As for the possibility of a true follower of Jesus practicing homosexuality, Paul addresses this head-on: “Or do you not know that the unrighteous will not inherit the kingdom of God? Do not be deceived: neither the sexually immoral, nor idolaters, nor adulterers, nor men who practice homosexuality, nor thieves, nor the greedy, nor drunkards, nor revilers, nor swindlers will inherit the kingdom of God. And such were some of you. But you were washed, you were sanctified, you were justified in the name of the Lord Jesus Christ and by the Spirit of our God” (1 Corinthians 6:9–11, ESV).

So says the Word of God.

Again, my issue is not with questioning President Trump's Christianity. Let God be the judge, and let all of us examine our own lives.

My issue is with a pro-abortion, practicing homosexual who claims to be Christian calling out Trump's alleged “hypocrisy.”

That, indeed, is the height of hypocrisy, and there is nothing Christian about it.