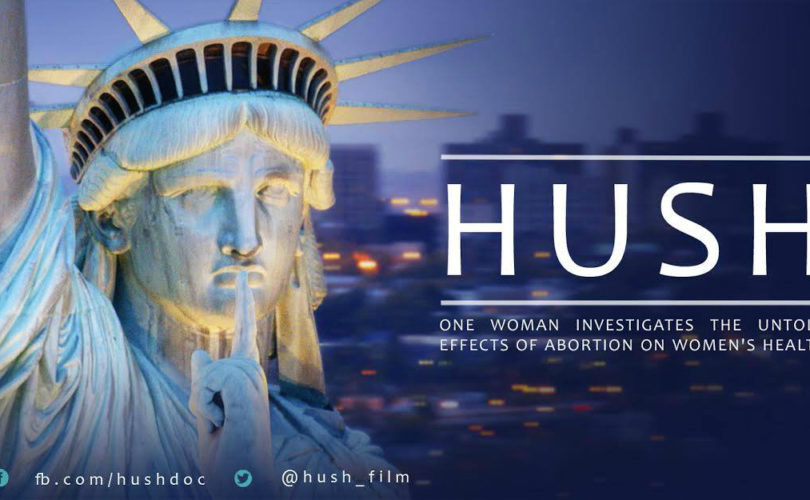 March 2, 2015 (LifeSiteNews) – When I was asked to review the new documentary Hush, which examines the complications surrounding the abortion procedure, I was prepared to be unimpressed. First of all, I don’t spend a lot of time highlighting abortion complications because I consider that to be one of the weakest arguments against abortion—abortion isn’t wrong because it hurts women, it is wrong because it destroys their children. Secondly, the documentarian was independent filmmaker Punam Gill, who is avowedly pro-choice—and spends the first ten minutes of the documentary affirming this fact ad nauseam.

By the end of the film, I took back my initial assessment. Gill takes a serious and unblinking look at the reality of abortion complications—and gives a scathing, informative, and refreshing take on the almost universal efforts of many medical organizations to suppress information they feel would reflect negatively on abortion.

Gill admits that she was initially suspicious of pro-life claims that abortion could cause a wide range of serious complications, simply because she felt that an anti-abortion bias could propel pro-lifers to make such claims for purely political reasons. But as she embarked on her investigation, she soon found that it was the pro-choice movement that was engaging in a wide-scale coverup, refusing to address even the most basic questions from medical researchers who had found irrefutable correlations between, for example, abortion and breast cancer.

It turned out, Gill discovered, that against the recommendations of many at the 2002 conference, the National Cancer Institute decided to declare that abortion could not be linked with breast cancer, and has stopped answering questions ever since. She went looking for facts, and found a coverup.

When she interviewed Dr. David Grimes, an abortionist, he responded to research by medical researchers such as Dr. Joel Brind by rattling off a list of medical organizations that had declared abortion a complication-free procedure, including the American Cancer Society and the World Health Organization. Gill went looking for answers from these organizations, noting that she wanted to find out why there seemed to be such a discrepancy between what many in the medical community said about abortion complications and the experiences of women she spoke with.

Without exception, each of these organizations refused to speak with her. None of them would answer her questions. All of them informed her that the case was closed. When those groups referred to the National Cancer Institute’s decision at a 2002 conference to announce that there was no link between abortion and breast cancer based on a 20-minute presentation by a researcher and in defiance of a mountain of evidence to the contrary, she decided to visit the National Cancer Institute to ask questions. She was refused entry and escorted off the grounds by security.

It turned out, Gill discovered, that against the recommendations of many at the 2002 conference, the National Cancer Institute decided to declare that abortion could not be linked with breast cancer, and has stopped answering questions ever since. She went looking for facts, and found a coverup.

Others pointed out complications that have also been disregarded or shouted down by the abortion activists. Evidence shows that a previous abortion may be the cause of up to 18% of subsequent pre-term births. The abortionist using tools to pry open the cervix and force his way to the developing child, it turns out, can weaken the cervix muscles and cause pre-term births later on. The forced evacuation of one child can make the womb a more dangerous place for siblings later on.

There are psychological effects, too. Punam Gill sits down with women who tell their horror stories of punctured uteruses, scars, hemorrhaging, infertility, and depression. Many suicide attempts happen on the anniversaries of abortions. Many of them speak with their eyes welling with tears. I got the sense that many of them were simply happy that someone was taking their story seriously. After all, the abortion industry has been working hard to suppress and ignore their stories for decades.

While she had previously noted the bias of pro-life physicians, Gill admits that it now occurs to her that the abortion industry has a vested financial interest in ensuring that abortion is presented in the best possible light. Carol Everett, a former abortion provider, told Gill how they would get women to agree to abortions. The women got the procedure. The abortion providers got rich.

The one confusing aspect of the documentary is how pro-choice Punam Gill managed to remain throughout the entire film. Footage of tiny preemies who, if they were still in the womb, could be legally aborted does not seem to have stirred her conscience. The brutality of the abortion procedure and the lasting impact on those who have these procedures does not seem to have dissuaded her from supporting abortion. But at least, in spite of this cognitive dissonance, she seems bent on telling the truth, no matter what. And that alone makes this film worth watching.

Out of India comes yet more evidence that abortion causes breast cancer
Women who had an abortion are 626% more likely to have breast cancer: Indian study