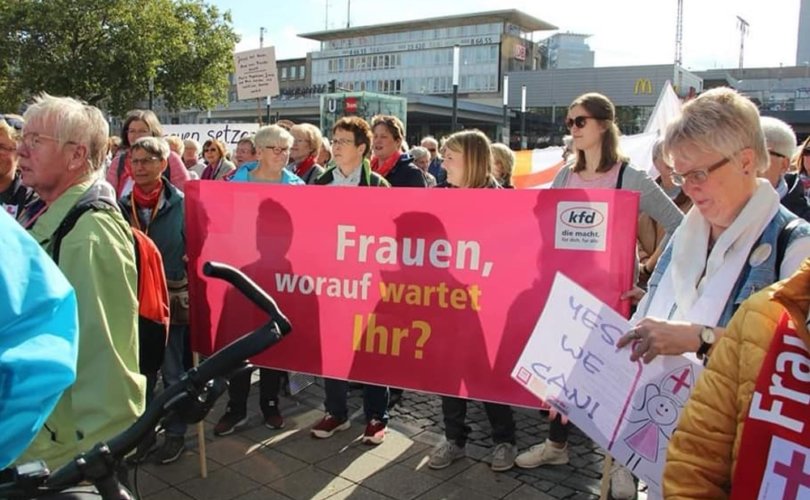 Members of German 'Catholic' feminists' group Maria 2.0 carrying a sign that reads: "Women, what are you waiting for?", Oct. 2019. Elisabeth Hartmann-Kulla / Facebook

November 14, 2019 (LifeSiteNews) – Maria 2.0, a group of feminists who say they are “Catholic” and who call for female priests in the Catholic Church, successfully campaigned to cancel a speaking event in a German parish with Cardinal Gerhard Müller, the former prefect of the Congregation for the Doctrine of the faith.

When he had to move into another location for his invited talk, the organizer of the protest, Elisabeth Hartmann-Kulla, insisted that he is nowhere welcome since he is “fundamentalist” and “inhuman.”

On November 6, Cardinal Müller's public discussion with Gloria Princess von Thurn und Taxis on the current situation of the Church had to be moved to another location (Lohnhalle in Bochum-Wattenscheid), after the pastor from the Saint Elizabeth Church in Bochum-Gerthe quite suddenly disinvited them from his parish.

While there were at first more organizational and monetary reasons given, it came out that there was also protest in the parish against Cardinal Müller's “conservative statements,” in the words of Lothar Gräfingholt a representative of the local Catholic council. That council actually considered supporting a protest outside of the church, should Cardinal Müller have actually come.

According to different reports, Maria 2.0, a nation-wide movement of Catholic feminists asking for female ordination and equal rights for women in the Catholic Church, was the leading voice of protest against Müller.

Elisabeth Hartmann-Kulla, speaking for Maria 2.0 in the Diocese of Essen, explained on facebook that “Cardinal Müller is also not welcome in the Lohnhalle in Bochum-Wattenscheid!” In her view, “critical and engaged Catholics (male and female) can nowhere accept without protest an evening event with the Cardinal and with Gloria Princess of Thurn and Taxis.”

“Here two people are given a platform to present to the public their ultra-conservative opinions, which are fundamentalist and inhuman,” she said.

LifeSite contacted Mrs. Hartmann-Kulla, asking her for comment. She states about her critique that her intervention “in my eyes is in no way a hindering or halting of the readiness to dialogue and democracy.”

Father Engelbert Recktenwald, FSSP, however, is of another opinion here. In a statement titled “Is there still space in the Church for the Faith?” he comments on Mrs. Hartmann-Kulla's protest and words: “One is shaken how the climate of discussion is being poisoned here.”

“Cardinal Müller,” explains Recktenwald, “supports the decision of Pope John Paul II that the Church has no possibility to ordain women to the priesthood. Is this teaching now inhuman so that it may not be given a platform anymore in the Church?”

The German priest goes on to remind his readers that Cardinal Müller had published a few months ago a “Manifesto of Faith.” “In it,” the priest continues, “he does not present any extreme positions. May there be no space anymore in the Church for the traditional Faith?” he asks.

In another recent post written in English, Father Recktenwald touches upon the question of female ordination and says that these debates all come down to the question of whether we truly believe in the Incarnation of Christ. He writes:
“If Christ is not God Incarnate who died on the cross for me to save me from hell, then I could not care less about the rest, either. Then I do not care if priests get married or if women become priests. It is bizarre to observe how it is in part the same circles that on the one hand demand the ordination of women, and on the other hand deny the institution of the priesthood by Christ, because they no longer consider Christ divine. If the priesthood does not originate from Christ, there are no priests, and what the deniers of the institution of the priesthood call 'priest' is something else. Against this background, the current discussions adopt almost ghostly features.”

The Maria 2.0 movement itself is controversial in Germany, also due to the fact that it actually organized a church strike which invited Catholics not to go to Holy Mass on a specific Sunday, thus inviting them to commit a mortal sin. In the Catholic Church, a Catholic has a moral obligation to go to Sunday Mass, unless he is hindered from doing so for serious reasons such as ill health or travel.

In May of 2019, German Cardinal Rainer Woelki distanced himself in a homily from this women's movement questioning the Church's teachings. On May 17, during a Holy Mass at the German Marian Shrine in Bödingen, Cardinal Woelki said: “Here in Bödingen, we do not meet a Mainstream-Mary; here we encounter the original, here we meet a Mary who does not proclaim just any kind of truths; here we meet a Mary who is not being used for the implementation of certain ecclesial-political considerations.”

In February of 2019, Cardinal Müller had published a “Manifesto of Faith,” in which he restated the essential truths of the Catholic faith, many of which seem to be under siege today. Among one of the important truths presented in this manifesto, Cardinal Müller says that, “with a view to receiving the ordination in the three stages of this [priestly] ministry, the Church is 'bound by the choice made by the Lord Himself. That is why it is not possible to ordain women' (CCC 1577).” He insists that “to imply that this impossibility is somehow a form of discrimination against women shows only the lack of understanding for this sacrament, which is not about earthly power but the representation of Christ, the Bridegroom of the Church.”

The fact that he has now been effectively persecuted in Germany for holding these positions shows how far the mainstream Catholics in Germany are moving away from these eternal truths of the Catholic Faith.