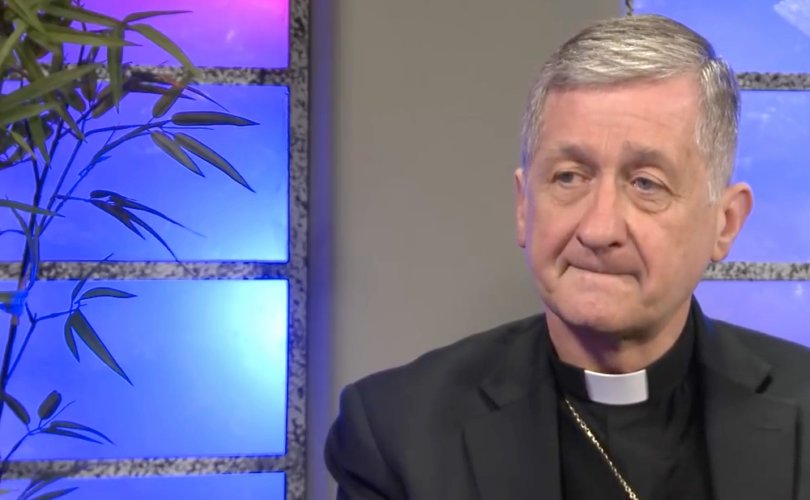 The trio – Chicago’s Cardinal Blase Cupich, Newark’s Cardinal Joseph Tobin, and San Diego’s Bishop Robert McElroy – have gone on the offensive in an attempt to undermine Archbishop Viganò’s credibility while also seeking to direct attention away from the stunning allegations and conclusions found in his report.

The ties that bind

Before these three were united against Viganò, they were among the five highest ranking members of the United States Catholic Conference of Bishops (USCCB) to endorse Jesuit Fr. James Martin’s pro-LGBT activism.

Tobin and McElroy, along with Cardinal Kevin Farrell, now head of the Vatican’s Dicastery for Laity, Family, and Life, offered words of praise for Fr. Martin’s work on the back cover of his pro-homosexual book, Building a Bridge.

And last November, Cupich praised the Jesuit for being what he called the “foremost evangelizer” of young people in the Church today.

The fifth major U.S. Prelate Fan is Washington D.C.’s Cardinal Donald Wuerl, who according to Martin, was “very supportive” when Martin found himself disinvited from a speaking engagement at D.C.’s Catholic University/Theological College last fall.

Viganò said in his testimony:

Father James Martin, S.J., acclaimed by the people mentioned above, in particular Cupich, Tobin, Farrell and McElroy, appointed Consultor of the Secretariat for Communications, well-known activist who promotes the LGBT agenda, chosen to corrupt the young people who will soon gather in Dublin for the World Meeting of Families, is nothing but a sad recent example of that deviated wing of the Society of Jesus.

No wonder Viganò’s testimony has incited such vindictiveness from this small group of prelates: He spoke the truth about their pro-gay golden boy, Fr. James Martin.

Perhaps the most significant tie that binds this trio – Cupich, Tobin, and McElroy – is that each owes his rise to dizzying heights in the Roman Catholic hierarchy to disgraced former Cardinal McCarrick.

“The appointments of Blase Cupich to Chicago and Joseph W. Tobin to Newark were orchestrated by McCarrick,” noted Archbishop Viganò in his testimony.

“The appointment of McElroy in San Diego was also orchestrated from above,” said Viganò, “with an encrypted peremptory order to me as Nuncio, by Cardinal Parolin: ‘Reserve the See of San Diego for McElroy.’

Cardinal Cupich has gone on a media blitz in the last 24 hours, becoming increasingly vituperative in his attacks on Viganò and his supporters with each media appearance.

Deflecting attention away from the substance of the report, especially its repercussion for Pope Francis’ pontificate, Cupich told NBC’s Chicago affiliate, “The Pope has a bigger agenda. He’s got to get on with other things,” such as “talking about the environment and protecting migrants.”

Most stunningly, Cupich succumbed to the most base of attack tactics and suggested that criticism against the Pope is motivated by racial animus.

Cupich asserted that Pope Francis’ critics “don’t like him because he’s a Latino.”

With that statement, not only does Cupich indict Viganò, he indicts all prelates who have backed him up, including Cardinal Raymond Burke, Archbishop Charles Chaput of Philadelphia, Bishop Thomas Olmsted of Phoenix, Bishop Robert Morlino of Madison, and Bishop Joseph Strickland of Tyler, Texas.

At the same time, Cupich is also suggesting that every single lay Catholic who supports Viganò is a racist.

In a public statement released today, Bishop McElroy alleges that far from being a charitable rooting out of corruption in the Church, Viganò’s revelations about rampant sex abuse is a “selective targeting of enemies” and a “tendentious” distortion of the “truth.”

McElroy, who was notified in 2016 about the abuse allegations against now former-Cardinal Theodore McCarricki, echoes liberal talking points by claiming that Viganò is just trying to “settle old personal scores.”

Desirous of making Viganò look like an ideologue, McElroy claimed that he is motivated by a “hatred for Pope Francis and all that he has taught.”

Newark’s Archbishop, Cardinal Tobin, dismisses Viganò’s testimony because it “cannot be understood as contributing to the healing of survivors of sexual abuse.”

In an official statement issued yesterday, Tobin decried the “innuendo and fearful ideology of the ‘testimony,’” implying that sinister forces motivated Archbishop Viganò to spill the beans.

The “fearful ideology” that alarms Tobin is conservative, magisterial Catholicism.