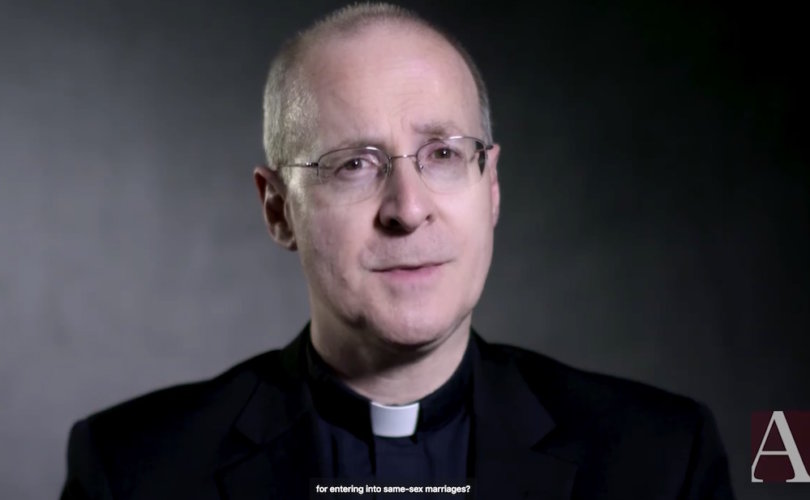 May 31, 2017 (LifeSiteNews) – A video promoting Jesuit Father James Martin's new book on the “LGBT community” features a same-sex couple being received by a priest and a woman who identifies as a man. Martin was recently named a communications consultant to the Vatican.

“The Catholic Church has an obligation to welcome LGBT people to show that they’re beloved children of God, to celebrate their gifts, to listen to them, to accompany them, and suffer with and even for them,” Martin says in the video.

This video isn't the first time Martin has called for the Church to embrace homosexuality's “special gifts.” He said this after receiving an award from the dissident group New Ways Ministry, which has been condemned by the Vatican and the U.S. Catholic bishops. Martin has also tweeted his support for boys using girls' restrooms and vice versa to his more than 100,000 Twitter followers.

The woman who identifies as a man, briefly shown in the video, appears to be Mateo Williamson. Williamson advocates that the Church become accepting of people's transgenderism and use their chosen pronouns rather than ones that correspond with their sex.

In the video, Martin touts his book as answering a number of contentious questions, such as whether the Church should fire employees who enter into same-sex “marriages.” The video makes no distinction between same-sex “marriage,” which is not recognized by the Church, and man-woman marriage.

The only mention of Catholic teaching Martin makes in the video is of the portion of the Catechism that calls for people who experience same-sex attraction to be treated with “respect, compassion, and sensitivity.” He does this in the context of celebrating Pope Francis's “Who am I to judge?” line.

“But we need not go far to look for other signs of welcome” besides the pope's famous remark, said Martin. He then pointed to that line in the Catechism.

Martin didn't mention what appears directly before it: “Basing itself on Sacred Scripture, which presents homosexual acts as acts of grave depravity, tradition has always declared that 'homosexual acts are intrinsically disordered.' They are contrary to the natural law. They close the sexual act to the gift of life. They do not proceed from a genuine affective and sexual complementarity. Under no circumstances can they be approved. The number of men and women who have deep-seated homosexual tendencies is not negligible. This inclination, which is objectively disordered, constitutes for most of them a trial” (CCC 2357 – 2358).

Building a Bridge is “about more than an invitation to welcome,” Martin continued. It “offers practical spiritual resources for LGBT Catholics, their families, and their friends.”

“The book includes selected Bible passages as well as meditations and reflection questions to help LGBT Catholics with their relationship to God, their Church, and their own self-understanding – and to help their families and friends too,” the Jesuit said. “Because ministering to LGBT Catholics is not just about the LGBT person, but their parents, grandparents, brothers and sisters, aunts and uncles, as well as their friends, co-workers, neighbors, and fellow parishioners” and “all who care about the spiritual life and welfare of LGBT people.”

Martin's words suggest that the Catholic Church doesn't already “welcome” those who are attracted to the same sex or confused about their gender. This couldn't be farther from the truth.

It ministers to people who are engaging in premarital sex, which the Church labels gravely wrong. It welcomes people who are addicted to pornography. The priests who reach out to such people and encourage them to follow Catholic teaching do so because they know we are made for more than that. We are made for authentic, sacrificial love – not the blind indulgence of every sexual inclination, or to be used and use other people for pleasure.

Truly welcoming and loving people means wishing eternal salvation for them. This is why orthodox Catholics encourage people to refrain from certain activities that the Church teaches are spiritually harmful, and that secular data show are physically and emotionally harmful as well. This is also why many who have returned to the Church after being betrayed by the sexual revolution's promises encourage others to do the same.

There are many same-sex attracted Catholics who don't identify as “LGBT” or want to be referred to as such. They reject this reductionist approach to their identities and experiences.

“Either man governs his passions and finds peace, or he lets himself be dominated by them and becomes unhappy,” the Catechism explains (CCC 2339). This, and the purpose of our male and female bodies, is at the heart of a truly pastoral approach to same-sex attraction. The heroic parish priests who deal with this delicate issue operate with love and utmost respect. They don't condemn people because of their attractions or desires. They help all of their parishioners, regardless of circumstances, acheive self-mastery, get closer to God, live out their Christian vocations, and grow in virtue.

Talk to a priest who preaches the fullness of the Church's message on sexual ethics, and you'll meet a shepherd who cares deeply for the souls of his flock.

Below are some resources for Catholics who experience same-sex attraction, or for people interested in learning more about Church teaching on it:

The Catechism of the Catholic Church

Desire of the Everlasting Hills

Courage, a Church-approved apostolate for men and women with same-sex attraction