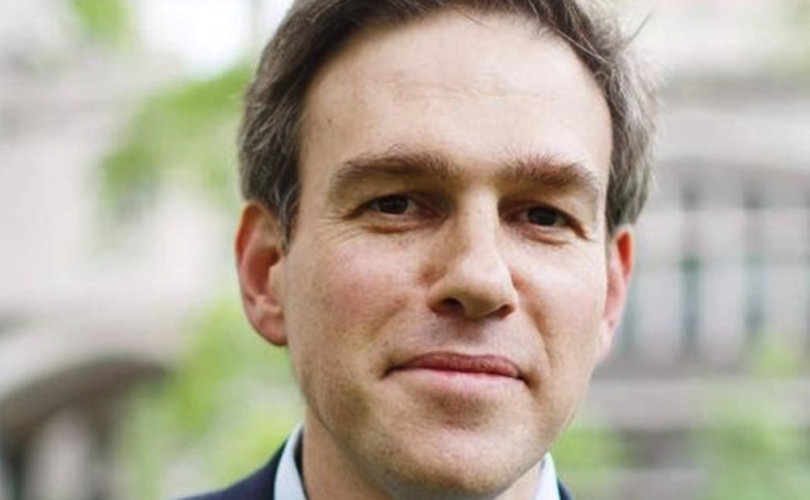 October 9, 2017 (LifeSiteNews) — New York Times resident “conservative” op-ed writer Bret Stephens is using the Supreme Court’s 2015 Obergefell ruling imposing “gay marriage” on the nation as an example of a “great cause” and potential precedent for repealing the Second Amendment, which guarantees Americans’ right to own and bear guns.

Stephens is advocating for the repeal of the Second Amendment — a cherished “progressive” cause — in the wake of the horrific Las Vegas gun assault that left 58 concert goers dead and hundreds injured.

In arguing against what he calls the “conservative fetish for the second amendment,” he writes in the Times: “Repealing the Amendment may seem like political Mission Impossible today, but in the era of same-sex marriage it's worth recalling that most great causes begin as improbable ones.”

All of this is fascinating because the main argument of devoted “Never Trumpers” like Stephens — i.e., pundits and GOP-leaning activists who refuse to support or vote for Donald Trump — is that Donald Trump is not conservative enough. They argued that Trump could do short- and long-term damage to the conservative movement by this action or that one.

Time will tell whether or not that prediction is proved correct, based on the entire range of President Trump’s policies. But certainly it is true that “Never Trumpers,” or any self-styled conservative who shills for homosexual “marriage,” is doing tremendous damage — not just to the conservative movement but, more important, to the cause of truth in our declining, increasingly biblically illiterate culture.

For many months now, conservatives like me who voted for Trump, even knowing that he was not a full conservative (I originally supported Sen. Ted Cruz), have had to endure the self-righteous indignation of Never Trumpers like Stephens for that choice. This usually includes piercing questions from “principled” Never Trumpers wondering how people on the Right could support Trump given his long history of moral indiscretions and his past New York City-infused liberalism.

Caveat: not all Never Trumpers are obnoxious like this and many are truly principled conservatives and Christians. And many are quite thoughtful in admonishing Christians to put God first, above loyalty to any politician or Party, especially a feckless one like the GOP.)

Now it turns out we’ve been scammed when it comes to some of the most prominent Never Trumpers — either people like Stephens or “conservative” websites that regularly promote them. Let’s be clear: besmirching the good name of “marriage” by attaching it to unholy, sodomitic relationships is about as far from noble “conservatism” as you can get. “Gay marriage,” an oxymoron and an ahistorical absurdity, preserves and conserves nothing for the good. But it does help normalize the revolutionary, misguided idea that homosexual relationships are on a moral par with natural marriage between husband and wife.

It is NOT conservative to domesticate homosexual “rights” through faux “marriage” (essentially “playing house,” to quote my late friend and ex-“gay” Anthony Falzarano). In fact, this very recent idea of genderless “marriage” is more radical than the annual June spectacle of gaudy drag queens and go-go boys dancing down Fifth Avenue in high heels to celebrate “gay pride.” That’s because homosexual “marriage” takes one of the noblest endeavors of life — getting married, staying faithful and raising children to create a natural family — and attaches it to the “crime against nature” (Noah Webster on sodomy), which the Bible calls “detestable” (an “abomination”).

Healthy societies are built on God’s plan for families, which produce succeeding generations of people who ideally live to honor their Creator. Homosexuality produces nothing by itself: note that “same-sex families” rely in some way on heterosexuality — the same people radical “gay” activists once mocked as “breeders” — to exist. So much for LGBT marriage “equality.” Nature itself discriminates against homosexual behavior.

Moreover, same-sex “marriage,” like the rest of the LGBT and liberal social agenda, caters to a person’s subjective feelings: my wants, my desires, my perceived needs, and my demands for the negation of historical and Judeo-Christian truth, all to rationalize my lifestyle choice. (Or, for pro-LGBT allies: their feelings of emotional support for their sexually confused loved ones.) That is characteristic of many liberals and anti-conservative to the core. It replaces objective, absolute truth with moral relativism and enshrines deviance in the law, which only causes more social destruction in society. Examples of the latter are “gay adoption” (creating intentionally motherless or fatherless homes) and the escalating LGBT legal war against people’s right to disagree with “gay marriage.”

So shame on the likes of Bret Stephens, and double-shame on them for so brazenly playing their “principled conservative” card against Trump and his supporters while they sell out God and genuine conservative ideals to demonstrate how socially modern they are. Needless to say, the liberal media gleefully promote any “conservative” who sells out on marriage.

To turn around Stephens’ opening sentence: I have never understood the conservative fetish for homosexual “marriage.” It’s bad enough when homosexual “conservatives” like Tammy Bruce or Guy Benson come out for it; clearly, they do so as part of a lifelong quest to rationalize their “proud” embrace of homosexual sin.

But many other pro-LGBT fellow travelers on the Right who advance “gay marriage” are, in my mind, the worst sort of opportunists. Because rather than confront the socially-left, anything goes zeitgeist that is destroying America from within (and helping to pollute nations without through our corrupt foreign policy), these so-called conservatives throw moral truth under the bus to score tolerance points with the leftist, elite media and Hollywood.

And then they have the audacity to lecture Trump about “conservatism”?

Ironically, pinned to the top of Bret Stephens Twitter feed is a tweet that reads, “My Daniel Pearl lecture on the dark purposes of Trump's attack on media, and the risks of conservative capitulation.”

Will the conservative media ever hold wayward leaders on the Right accountable for their cultural “capitulations” — especially appeasing the homosexual lobby, which so many are afraid to confront? Why are there so few prominent straight-shooters like the Rev. Franklin Graham, who refuses to bend to the sexual chaos of our decadent age and compassionately restates timeless moral truth: that homosexuality is a sin — not to be celebrated as “marriage” — but one that can be overcome through the grace of Jesus Christ?

As for Stephens’ main points on why the Second Amendment should be dispensed with, I’ll leave it to National Review’s Charles Cook to deal with his feeble reasoning:

“Stephens is not a stupid man, and nor is he unaware of the reach that tyrannies have enjoyed. On the contrary, his is often a welcome voice in the fight for the liberty of all people. This being so, it is remarkable how blithely he elects to invoke Madison as a friend to his cause, and how readily he subordinates the right to bear arms to expediency. In truth, the Second Amendment was not an “amendment” at all, for, unlike some of the subsequent alterations to the charter, it represented neither a change in policy nor a remedy for an error. Rather, along with the rest of the Bill of Rights it was the product of a disagreement as to how to best protect freedoms that were generally considered unalienable.

“For reasons outlined in The Federalist Papers, Madison believed that the power of the federal government would be constrained by its structure; if the central state had only a handful of carefully enumerated powers, he contended, it would not be able to exceed them. Others, the “Anti-Federalists,” disagreed, demanding a belt to add to the suspenders. The debate that followed was strictly structural — not a fight over speech or due process or arms, but over how best to ensure the maintenance of ancient liberty. Madison acknowledged this when introducing the Bill of Rights in Congress. The rights he had included, he made clear to his peers, were those “against which I believe no serious objection has been made by any class of our constituents.” In encoding the right to bear arms among the set, neither Madison nor his opponents were innovating. Instead, they were channeling Justinian, Locke, and Blackstone, and ensuring that the people of the new country would enjoy a robust right to self-defense, and the auxiliary protections that enabled it.”