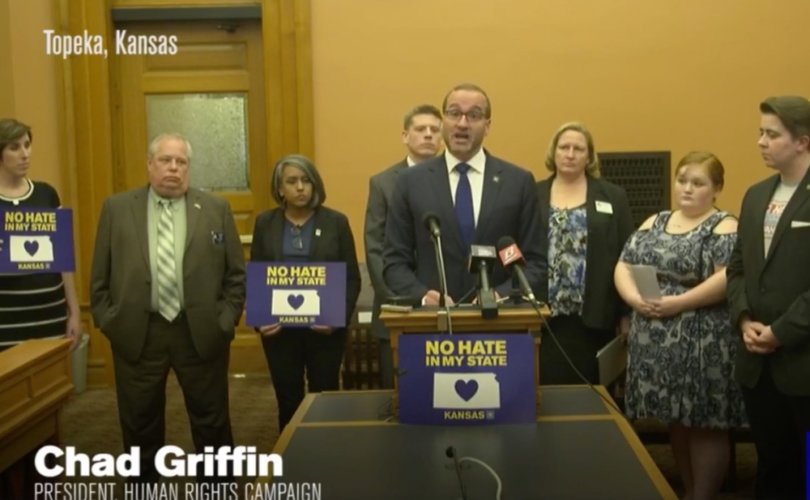 KANSAS, May 1, 2018 (LifeSiteNews) – Religious liberty and the best interests of vulnerable children hang in the balance as Corporate America again flexes its muscle to coerce a state into bending to the will of LGBT special interest groups.

Apple, Google and Amazon––along with more than 80 other tech companies––have declared their opposition to the Kansas Adoption Protection Act, warning of “dire” economic consequences” if the legislation is enacted.

The group of organizations, which calls itself “TechNet,” sent Kansas legislators a letter on Friday calling the measure a “license to discriminate.”

The proposed legislation is aimed at preventing the state from denying financial aid it would otherwise award to faith-based adoption agencies who, because of their “sincerely held religious beliefs,” choose not to place children in the homes of gays and lesbians.

The campaign is orchestrated by the behemoth Washington, DC-based pro-gay lobbying organization, the Human Rights Campaign (HRC), which has called the legislation “dangerous” and asserts that opposition to the bill is “overwhelming.”  HRC President Chad Griffin said the bill is “hateful.”

TechNet’s letter to Kansas legislators takes on a sudden, ominous, threatening tone in its third paragraph:

States across the county have rejected similar legislation because they have seen that discriminatory legislation can have dire consequences on economic development and business competitiveness. Discriminatory legislation would hamper the state’s ability to attract, recruit and retain business and top talent, drive declines in the state’s travel & tourism industry, weaken the states to attract next-generation entrepreneurs and innovators, and make Kansas less competitive for the relocation or expansion of both large and small businesses.

Strong-arming legislators by threatening economic ruin for their state has become a popular strategy for LGBT lobbyists across the country because they have found that it works.

The tactic was first used successfully in Indiana in February 2014.

During the state’s Senate Rules Committee hearing concerning an amendment to protect the definition of marriage, the first three opposition testimonies came from surprise validators: A senior vice president of pharmaceutical giant Eli Lilly, a vice president and chief administrative officer of engine manufacturing colossus Cummins, Incorporated, and a representative of Indiana University.

Woven throughout their testimony and throughout most every subsequent one was the dire warning that if same-sex “marriage” is not embraced in the Hoosier State, Indiana would suffer a severe case of “brain drain,” leaving only knuckle draggers behind. It was a blatant straw man argument fabricated by the leftist coalition.

The show of force by the state’s economic heavy-hitters was a carefully crafted ambush, taking conservative senators by surprise.  The senators’ faces visibly blanched during the  opposition testimonies.

In the end, despite a 37 to 13 Republican supermajority, the State Senate voted to postpone the inclusion of a marriage amendment on the ballot until 2016.

By the time 2016 rolled around, the U.S. Supreme Court had legalized same-sex “marriage” across the land, rendering moot the Indiana Senate’s postponement of the bill.  The senators had perhaps dodged a political bullet, but the pro-LGBT left learned an important lesson that day which it has never forgotten: Conservatives often lack courage to stand for their principles, especially if economic prosperity is threatened, used as a cudgel to beat back religious liberty.

Since then, the most famous use of the LGBT “Corporate Threat” tactic took place in North Carolina over the state’s “Bathroom Bill.”  Known as “HB2,” the bill was aimed at preventing gender-confused individuals from using opposite sex public bathrooms.

In addition to large corporations, HRC enlisted the help of the NBA and NCAA (National College Athletic Association), which imposed an “ultimatum” that would have prevented the state from hosting championship college sports events like March Madness over the following five years.

KTLA-5 reported at the time, “The 2017 NBA All-Star Game, which was held in February, was moved from Charlotte to New Orleans. The NCAA relocated several college athletic championship events for the 2016-17 season over the law and implied four more years of tournaments are at stake if HB2 stands.”

The Associated Press also ran a story putting a “price tag” of $3.76 billion as the estimated cost to North Carolina in lost business through boycotts if HB2 was not repealed.

Huge numbers like that would put fear in the heart of any state legislator, whether the assertion were verifiably true or not.

HRC, working in conjunction with the ACLU of Kansas, has placed full-page ads in two major Kansas Newspapers, the Topeka Capital-Journal and the Wichita Eagle, in a show of force from the tech companies.

A short video explaining the Kansas Adoption Protection Act can be seen here:

A video of LGBT and associated pro-LGBT activists speaking against the Adoption Protection Act can be seen here:

Read more about the evolution of the pro-LGBT economic threat tactics: