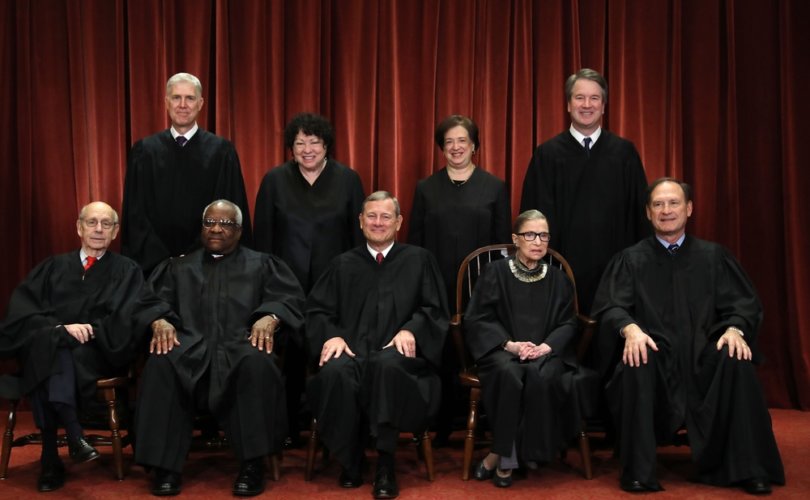 June 29, 2020 (LifeSiteNews) – In what is turning out to be a devastating term for social conservatives, the U.S. Supreme Court ruled in a 5-4 decision to overturn a Louisiana law requiring abortionists to have admitting privileges at nearby hospitals. Chief Justice John Roberts, who has frequently voted pro-life in the past, joined the liberal justices in their decision. To analyze the ruling, I contacted Dr. Michael New, an expert in abortion statistics serving as an associate scholar at the Charles Lozier Institute and a visiting assistant professor at the Catholic University of America. Here is what he told me.

What does this ruling mean for the pro-life movement?

That said, pro-lifers should not despair. According to the Guttmacher Institute, over 400 state level pro-life laws have been enacted since 2010. The Supreme Court will likely decide to hear the constitutionality of some of these laws in the near future. It is certainly possible that there might be five votes on the U.S. Supreme Court to uphold some of these protective state level pro-life laws.

Furthermore, many trends are positive for pro-lifers. The number of abortion facilities has declined by nearly two-thirds since the early 1990s. Since the late 1980s, the number of organizations devoted to pregnant women has increased by over 80 percent. Pro-lifers have made some very durable long-term gains in the court of public opinion. Most importantly the U.S abortion rate has declined by over 50 percent since 1980. An important reason for this decline is because a higher percentage of unintended pregnancies are being carried to term. This nicely shows that pro-life educational, service, and legislative efforts have all been effective.

What does this ruling mean for Roe v. Wade?

To be honest, I do not think this decision tells us much about the long-term future of Roe v. Wade. This particular case was not intended to present a direct challenge to Roe v. Wade. Furthermore, a dramatic reversal of Roe v. Wade is not a likely short-term outcome. A more likely outcome is that the Supreme Court will issue decisions in the future that will allow states to do more to regulate abortion and protect unborn children.

Why do you think Roberts voted the way that he did, considering his pro-life credentials?

Today's ruling clearly shows that John Roberts issues decisions based on politics. It makes absolutely no sense that he would vote to uphold the Texas abortion facility regulations in Whole Woman's Health v. Hellerstedt in 2016 and strike down the Louisiana abortion facility regulations in June Medical Servces v. Russo. The only difference is that in the Louisiana case his vote was pivotal.

Roberts is attempting to make the Supreme Court appear less partisan. He appears to dislike high profile rulings where it appears that [the] justices are issuing opinions based on partisan lines. That said, that is not an appropriate way to rule on cases that come before the Supreme Court. Roberts needs to issue opinions based on the U.S. Constitution. He should neither be concerned with how pundits view the court nor the resulting political fallout.

Do you think this ruling damages the legal standing of the pro-life movement?

I do not think this ruling damages the legal standing of the pro-life movement as such. In fact, I think a reasonable case could be made for continuing with the same legislative and political strategy.

That said, I do think that pro-life groups and pro-life leaders will start to more seriously consider alternative legislative and political approaches. Since the early 1980s, beltway pro-life groups have engaged a rough consensus about how to proceed. At the federal level, we push for defunding abortion, incremental laws that can help shape public opinion, and Supreme Court justices who will be likely to overturn Roe v. Wade. At the state level, the goal is to push for progressively stronger incremental laws, hoping that one of these laws will pose a strong legal challenge to the Supreme Court’s ruling in Casey v. Planned Parenthood.

However, after today's ruling, some alternative approaches will probably receive more consideration. For instance, one alternative idea that has been considered in pro-life academic and legal circles is enacting federal legislation under Section Five of the 14th Amendment, that would restore legal protection for unborn children. This proposal was brought up by Princeton Professor Robert P. George during a Republican Presidential debate in South Carolina in 2011. Several Republican Presidential candidates were receptive to the idea.

Another idea, that has been considered in conservative legal circles is jurisdiction stripping – removing the ability of federal courts to hear cases that involve abortion. That said, if the pro-life movement decides to shift strategies, unity will be extremely important. Internal debates over how to draft a human life amendment to the U.S. Constitution during the 1970s and early 1980s did a great deal of damage to the pro-life cause. Pro-lifers certainly do not want to go through something similar again.

How should pro-lifers respond to this ruling?

Pro-lifers should not give up hope! As we continue our efforts to build a culture of life we will inevitably encounter some setbacks. There will be court decisions that strike down pro-life laws. There will be elections where pro-life candidates lose. However, our long term efforts are bearing fruit and we should not forget that.