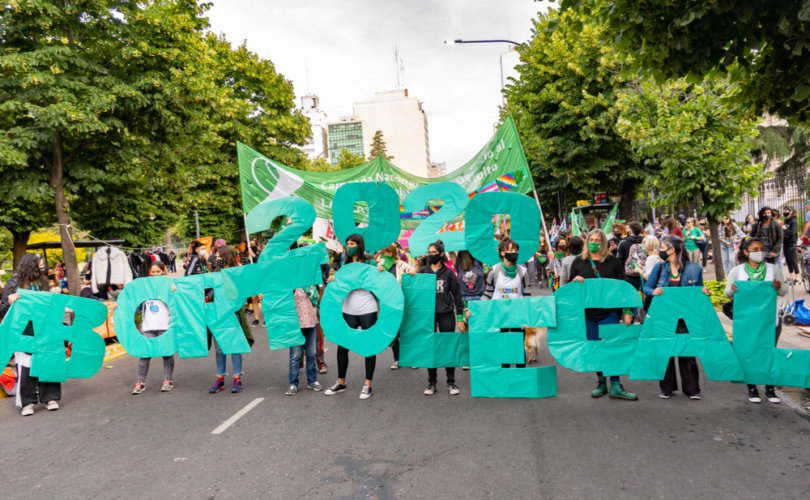 BUENOS AIRES, Argentina, January 4, 2021 (LifeSiteNews) — I have been following the war between the abortion activists, represented by their signature green gear, and the Blue Wave movement since 2018, when Argentina’s senate voted narrowly against legalizing abortion. Since then, I have been in contact with pro-life leaders and grassroots activists from across the continent as the anti-abortion movement has spread from country to country, culminating in massive marches. Pro-lifers not only in Argentina but in many Latin American nations were crushed by the narrow senate vote legalizing abortion last week.

When I spoke with Camila Duro, a 26-year-old Argentine pro-life leader who works for Frente Joven, and pro-life journalist José Carmuega shortly before the congressional vote in early December, they were concerned but cautiously optimistic that legalization would be avoided by a very narrow margin.

Millions of pro-lifers had taken to the streets across the country since 2018, and the victory two years ago had proven a catalyst for Latin America’s silent pro-life majority. Many people had been unaware that international organizations, global abortion giants, supposed human rights NGOs, and Western nations were pushing relentlessly to see abortion brought to their nations.

It was this pressure that pushed a handful of senators into the abortion camp. I reached Camila Duro two days after the vote, and she told me that the abortion activists had spared no effort to ensure that 2020 would not be a repeat of 2018.

“Senators from the party of President Alberto Fernández received a lot of pressure and blackmailing,” she told me. “The president himself went from province to province the weekend before the vote to make them change their votes. Many of them negotiated ‘favors’ in exchange for switching. It was outrageous.”

Despite this disappointment, Duro says there is one long-shot chance to halt legalization.

“There’s a judicial way, and we’ll take it,” she said. “There’s a double unconstitutional problem: our constitution was reformed in 1994 and we assumed international treaties with the reservation that we protect the right to life, incorporating the fact that life begins at conception. The second problem is with federalism, because here in Argentina, healthcare is a matter of each province. It is not a national thing. This law obliges provinces no matter what.”

The next steps for Argentina’s Blue Wave movement are simple.

“First, we’re trying to brake this in court,” Duro told me. After that, “the cultural battle is the priority. We’ll work to make abortion unthinkable. We’ll fight. Our doctors and the people are mostly against abortion. This is just a new start.” Millions of ordinary citizens put boots on the ground over the past two years, and the pro-life movement is ready for war — even if it proves to be a long one.

But first, many are still grieving. As someone working full-time in the pro-life movement, the result was heartbreaking for Duro.

“It was painful. Very painful,” she said. “In think the best we can do is to fight this battle till the end. The worst thing is to consider how many years this new battle is going to take, and how many babies are going to die because of this law, and how many women are going to be broken because of abortion. Many doctors pressure impoverished women to have abortions, and many may be tempted because of fear.”

First the courts; then the culture. Argentina has fallen, but her sleeping pro-life majority has awakened, and unlike many nations across the West, most of her citizens still do oppose abortion. Unfortunately, elections have consequences, and many left-wing Latin American politicians are determined to make their mark by bringing legal abortion to their impoverished nations, robbing the most vulnerable members of society of their rights to curry favor with the global elites.

Only the people can make a difference now.

Jonathon’s podcast, The Van Maren Show, is dedicated to telling the stories of the pro-life and pro-family movement. In his latest episode, he is is joined by Barbara Kay to discuss the ideologies which have influenced society’s institutions. Topics of the conversation include feminism, Marxist ideologies, transgenderism, and more.