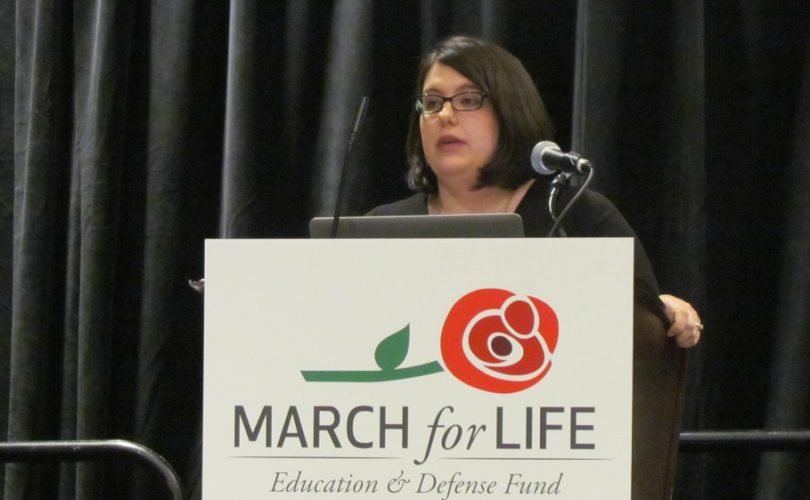 Kristan Hawkins, president of Students for Life of America, shares the story of her son with Cystic Fibrosis at a March for Life event on January 21, 2015.Ben Johnson / LifeSiteNews

It takes great courage to confront a politician who harmed the pro-life cause – especially one who just received an ovation at the March for Life.

It takes even more stamina when you're six months pregnant.

But Kristan Hawkins, the president of Students for Life of America (SFLA), is that kind of leader.

Rep. Jackie Walorski, R-IN, helped lead a House uprising that killed the Pain Capable Unborn Child Protection Act, a bill to limit abortion to the first 20 weeks of pregnancy that many pro-life groups have labeled their top legislative priority.

The morning that the bill had been scheduled for a vote, January 22, Walorski incredibly found herself standing next to the podium at the March for Life receiving a warm ovation.

Although no other pro-life organizations discussed the inexplicable turn of events, Kristan Hawkins – who had just served as one of the featured speakers for the annual event – immediately asked Walorski why she undermined the pro-life bill.

“I felt that I had a good opportunity to ask Congresswoman Walorski why she believed that there was any good reason for an abortion after five months of pregnancy,” Kristan Hawkins told me. SFLA members recorded the exchange on video, as well.

The smile can be seen quickly disappearing from Walorski's face as she descended the steps from the March for Life platform, where she was just applauded, and she heard the question.

Although the audio is quite poor due to high winds, Congresswoman Walorski can be heard saying, “I'm 100 percent pro-life” – an apparent reference to her rating from the National Right to Life Committee. (As of this writing, she has voted the right way six times – including two repeated votes on the same bills.) However, the NRLC scorecard counts votes, not procedural deal-making.

Hawkins was less than convinced. “Her actions were a huge slap in the face to pro-lifers who supported her and to those young women and Millennials, both of whom overwhelmingly support banning abortions after 20 weeks, who were used as scapegoats in order to not bring the bill to the floor for a vote,” she told me.

Walorski then briskly walked off in the other direction as a male staffer inserted himself between Hawkins and the Indiana congresswoman, whose district includes Notre Dame.

“There is nothing more important than saving lives,” Hawkins said after the exchange, and “there's never an excuse to putting protocols and in-party fighting over saving babies and mothers.”

(This story continues following the video.)

By holding people who claim to be on “our side” accountable, even at pro-life events, Hawkins is following in good footsteps. The March for Life founder Nellie Gray pointedly asked President Ronald Reagan about not acting on certain pro-life priorities – not once, offstage, but multiple marches in a row, from the dais, before he was to give the keynote speech. Gray actually interrupted Reagan's address to the 1988 March for Life to ask him why he had not vetoed a bill containing taxpayer-funding for abortion in Washington, D.C.

I'm not surprised Kristan was able to ask the congresswoman about her actions face-to-face. When Occupy Wall Street protesters started shouting down pro-life teens at the 2013 March for Life, exactly two people in the entire auditorium went out to ask them why: Kristan and me.

Two years later, Kristan revealed for the first time her own challenges raising a child with Cystic Fibrosis. Compared to that, what can an Occupy Wall Street protester or a middle-aged congresswoman wearing hot pink do to scare her?

It is reassuring to think that the next generation of pro-life leaders is being trained by someone who so fully exemplifies the pro-life ethic, especially the virtue of courage.