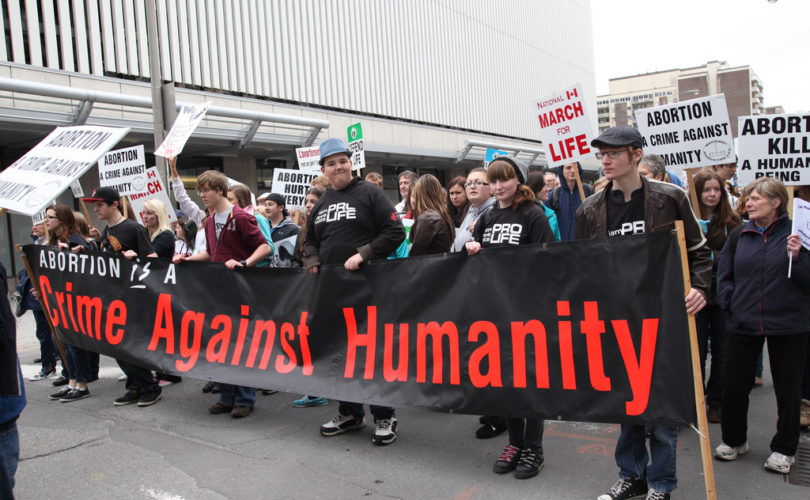 A very quick scan of today’s morally insane society tells quite a different story. It is not religious people who ignore facts in favour of emotion. On the contrary.Steve Jalsevac/LifeSiteNews

Are pro-lifers guilty of ignoring facts and just using “emotional arguments” to make people agree with them? That’s what Michael Payton of Dying with Dignity argued during a debate last October with Alex Schadenberg of the Euthanasia Prevention Coalition. I was at that debate, and what he said has bugged me ever since.

This argument, coming from a movement that almost always uses film testimonies of sick, dying, and suffering people to manipulate the public into supporting a new, fictitious right – the “right to die”!

Indeed, a very quick scan of today’s morally insane society tells quite a different story. It is not religious people who ignore facts in favour of emotion. On the contrary.

Our society no longer makes moral decisions based on facts or truth, and in many cases will not even admit that such a thing as truth even exists. Consequently, we have now accorded feelings the objectivity that facts and truth once had. We decide what we want to do and how we feel about something, and then simply bend reality to align with our personal choices. Hyper-individualism has combined with moral relativism to create a schizophrenic and suicidal culture that howls about reason and science, but refuses to listen to them.

The leaders of the Sexual Revolution have successfully exploited the heart-rending ‘hard cases’ to accomplish their ends—pregnancy as the result of rape, death from horribly painful diseases, and the confusion of a teen struggling with his sexual identity, for example.

For example: It doesn’t matter what the word marriage means, it only matters what we currently want it to mean, for now; It doesn’t matter if you have a penis, if you decide to “self-identify” as a woman, then biology is of no consequence, and anyone who suggests otherwise should be bizarrely tarred and feathered as a bigot; It doesn’t matter if science and embryology have long ago confirmed that we know when a human life begins, it is our feelings towards human beings in the womb that dictate whether they live or die. Biological reality is no match for what English professor Mark Bauerlein called “the dumbest generation.”

We’ve gone down the rabbit hole into a giant game of make-believe–a cute game for children, but decidedly terrifying when adults do the same, and the stakes are so high.

It’s not that empathy and compassion are not important in debates regarding the family, abortion, euthanasia, sexuality, and so on. In fact, those of us advocating for truth in these matters have sometimes failed sufficiently to acknowledge the pain, suffering, confusion, and struggles of people, which has often resulted in the truth of our arguments being lost.

The leaders of the Sexual Revolution have successfully exploited the heart-rending ‘hard cases’ to accomplish their ends—pregnancy as the result of rape, death from horribly painful diseases, and the confusion of a teen struggling with his sexual identity, for example.

It is contingent on us to recognize that these circumstances are, indeed, often excruciatingly painful, and that reality should shape how we respond. But at the same time, we cannot change truth in the face of circumstances (a child conceived in rape being suctioned into bloody slurry by an abortionist is a horrifying response to a horrifying crime), even as we are responsible to reach out in genuine love, wanting what is best for the other. As Martin Luther King Jr. once observed, “Darkness cannot drive out darkness, only light can do that.”

There often seems to be no room for reasonable discussion on these issues anymore. The Sexual Revolutionaries are quick and savage in their protection of their new-found “rights,” and demonize anyone who makes any claim that makes them feel bad or questions their actions in any way. Regardless of an increasingly undeniable legacy of rampant pornography addiction, sexually transmitted diseases, broken families, and dismembered pre-born children, they insist that what they advocate for is “progress.” If we point out the obvious—that it is not—we get called misogynists, homophobes, transphobes, prudes, or any number of other often-newly invented terms to describe people who disagree with these newly invented rights.

It’s sad, but enlightening, to consider how bewildered people just a few generations ago would be by our cultural insanity. That people who hold to ideas rooted in the eternal are marginalized as bigots by people clinging to radical new ideas barely decades old is evidence of just how fast the Revolution of Feelings has taken place. I think of P.J. O’Rourke’s witty comment about the Baby Boom generation and their propensity to react based on feelings rather than facts in his newest book examining that generation: “It wasn’t a fact. But facts are faint thing next to feelings. Facts are acknowledged, feelings are felt.”

And so are the consequences of ignoring reality.