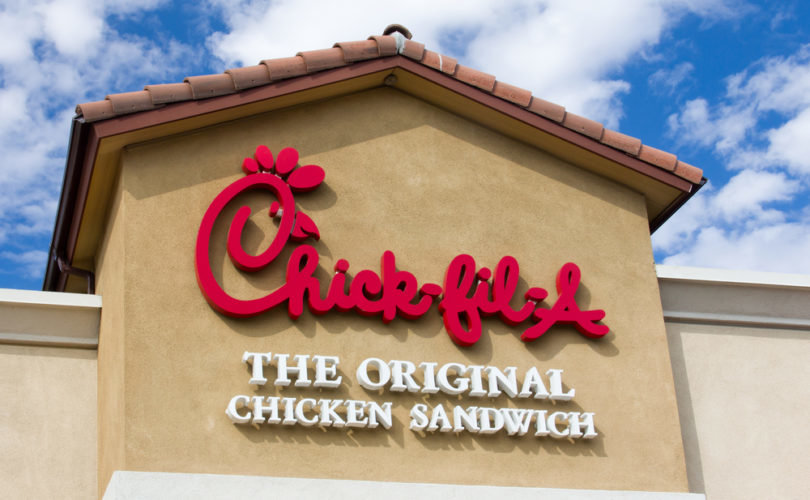 July 27, 2018 (LifeSiteNews) – When I read that the fried chicken giant Chick-fil-A was planning to open several restaurants in Toronto next year (and a dozen across Canada over the next several years), I texted my friend: “Prediction: some activist is going to make a stink about Chick-fil-A.” After all, when the famous chicken chain moved into New York City earlier this year, the New Yorker noted that Chick-fil-A’s arrival was “creepy” because of its “pervasive Christian traditionalism.” Even the fact that Chick-fil-A remains closed on Sunday attracted the writer’s ire.

And sure enough, so it was. Businesses owned by Christians who support Christian causes were once common (and still are, some enterprising journalist is sure to discover soon), but now the mere mention of the restaurant chain triggers tortured headlines like this one, in the Globe and Mail: “Controversial U.S. fast-food chain Chick-fil-A, whose owners criticize gay marriage, expanding to Toronto.” Now, what do you think the Globe wants you to know about these fast food establishments? That they are irrevocably connected to homophobes, that’s what.

That little insight was even dubbed an “exclusive” by Canada’s newspaper of record. Here’s their first two paragraphs in the news story about the arrival of a fast food chain:

Chick-fil-A Inc., the controversial fast-food chain whose owners have spoken out against gay marriage, plans to expand to Toronto next year.

The Atlanta-based seller of fried chicken, whose corporate purpose begins with “to glorify God,” plans to open 15 locations in the Toronto area over the next five years, with the first three in 2019.

You can almost imagine the journalist’s trembling hand as he recorded the news: On the surface, it appears as if a series of diners serving tasty chicken sandwiches are arriving in Canada’s most populous city. In reality, however, the Christians are coming—and they believe that even food-making should “glorify God” and that marriage should be defined as it was for the previous 2,000 years rather than the past 20. This is what they refer to in the business as a “scoop.”

CTV News also revealed the dark past of Chick-fil-A, which is owned by an evangelical Southern Baptist family (a delightfully dark and exotic thing for the resident scribblers of Canada’s progressive print papers), noting that CEO Dan Cathy had triggered LGBT protests (gay and lesbian couples arrived at the restaurants to make out in public) after he “expressed support for the ‘biblical’ definition of marriage.” One presumes that CTV put quotation marks around “biblical” because they have no idea what that means.

The Toronto Star made the mistake of initially publishing a news release from Chick-fil-A, for which it promptly apologized and then replaced it with an article from the Canadian Press, which again managed to awkwardly cram information about the shocking opposition to gay “marriage” of the Cathy family into otherwise innocent-looking sentences: “Atlanta-based Chick-fil-A, which became the subject of a boycott in 2012 after CEO Dan Cathy tweeted that the U.S. Supreme Court’s support same-sex marriage was ‘a sad day for our nation,’ said it has plans to bring about 15 of its locations to the Greater Toronto Area over the next five years.”

The same day, the Financial Post included Chick-fil-A’s donations to “anti-LGBTQ groups” as part of their list of “What you need to know about Chick-fil-A coming to Canada.” And of course, there is a petition to “ban Chick-fil-A from expanding to Canada,” explaining to hungry Canadians that the restaurant has a “history of discrimination. “A petition called “Chick-Fil-A: Stay Out Of Canada” has over 46,000 signatures,” NarCity noted. “The petition was started back in 2014 when the Calgary restaurant first opened. They only need 3,600 more signatures to reach their goal. ‘Would you like your fried chicken with a side of homophobia?’ the petition reads, ‘That's what's on offer at the Calgary International Airport, where notoriously anti-gay restaurant Chick-fil-A has just opened its first Canadian branch.’”

None of this squawking from LGBT activists has managed to hurt Chick-fil-A’s popularity, mind you. With the exception of handful of virtue-signalling politicians and professionally-offended progressive activists, it turns out that people don’t mind if a restaurant is closed on Sunday and are indifferent to whether the owners of the restaurants are Christian—Chick-fil-A is on track to becoming the third-largest fast food chain in the US and is expected to surpass Wendy’s, Burger King, and Taco Bell. Business experts expect the chain to do very well in Canada despite the media fixation on the Cathy family’s Christian views.

As for myself, I look forward to driving into Toronto next year for a chicken sandwich—and I expect it will be busy.